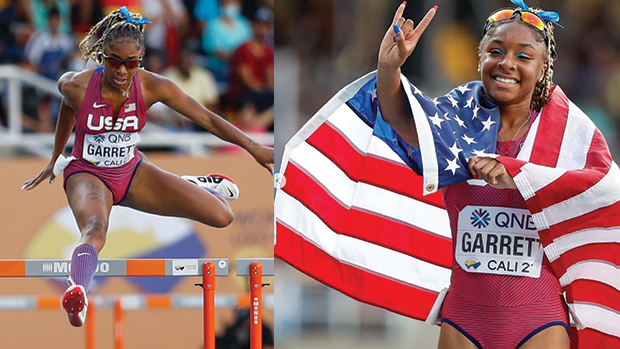 * Akala Garrett in the 400mH at the World U20 Championships

Needing three nearly-perfect rounds to claim a World U20 title, the rising senior at Harding University High School (NC) ran the first round on Tuesday in 58.40, went 57.28 on Wednesday and then, on the final day of action on Thursday, threw down the gauntlet.

The future University of Texas hurdler claimed her coveted World U20 title with a performance for the ages, securing the win with a new World U20 and World U18 lead of 56.16 seconds.

After a season full of U.S. and World Championships, Garrett's performance is still ranked among the top 100 in the world.

The race was a top 15 American time on the year.

Oddly enough, though, it's still not a North Carolina state high school record: That honor still is held by Anna Cockrell, who went 55.20 back in 2016 at the World U20 Championships.

Garrett still has another year.

Way back in January, Hana Moll secured a massive PR of 14 feet, 8 inches in the pole vault.

The moment, achieved at the Pole Vault Summit in Las Vegas, ultimately catalyzed into the most successful run of clearances in her young career. It led to wins at the Millrose Games (14-7.25), the Husky Classic (14-6.5) and the Texas Elite PV Explosion (14-7.25).

While success followed her outdoors, too -- specifically her 14-5.25 height at the Oregon Relays in April -- Moll had an appropriate challenger: Her sister Amanda.

The Moll sisters eventually went 1-2 at the Washington state meet, NSAF Nationals and the USATF U20 Championships.

It represented the biggest win in Moll's career. Her margin of victory was 0.05 meters in front of second-place Chiara Sistermann (Germany) and third-place Janne Sophie Ohrt (Germany).

Better yet, Moll cleared her final height on her last attempt.

Her sister Amanda was fifth with a mark of 4.20.

Men's Javelin: Evan Niedrowski was fifth in the first section, qualifying for the final with a mark of 69.42 meters.

Women's 100mH: Jalaysiya Smith, the USC freshman, and Eddiyah Frye, a first-year Georgia athlete, reached the next round with impressive first showings. Smith won heat four in a time of 13.42, while Frye was second in heat two in a time of 13.57.

Men's 800m: Miles Brown and Sam Rodman, recent college freshmen, moved on to the next round with qualifiers in the first round of action. Rodman, a Princeton freshman, was second in heat seven, clocking a time of 1:50.36 while Brown, the Michigan freshman, was third in heat two in 1:51.82.

Men's Triple Jump: Solomon Washington and Floyd Whitaker moved on the finals with qualifications in the early round. Whitaker was fifth in the second section, hitting 15.54 meters in the pit, while Washington managed a mark of 15.85 in group A, finishing fourth.

Women's 1,500m: Addy Wiley, the recently-minted high school national-record holder in the 1,600m, was second in her first 1,500m heat on Thursday, clocking a time of 4:19.39. Mia Barnett, the Virginia freshman, was third in heat two, also qualifying to the final with a time of 4:18.51. Barnett's time was seventh-fastest among the round.

Women's 4x100: The United States' foursome of Lily Jones, Autumn Wilson, Iyana Gray and Alyssa Colbert clocked the second-fastest time of the day out of the second section, hitting 43.66 to win the heat. Jamaica's lineup was the fastest overall over in heat one, clocking a time of 43.28.

Men's Pole Vault: Two Americans found themselves in the final, and Garrett Brown, the Stanford freshman, finished fourth overall with a top height of 5.25 meters. Justin Rogers, the Hershey (PA) graduate, was ninth overall in 5.15 meters.

Men's 4x100: The United States reached the final but was the fifth-fastest out of the four heats, hitting 39.78 on the clock. The lineup consisted of Johnny Brackins, Michael Gizzi, David Foster and Charlie Bartholomew.

Women's High Jump: Emma Gates eked into the final with the sixth-and-final spot in Group A, clearing a height of 1.80 meters.

Women's 200m: Both Mia Brahe-Pedersen, the Lake Oswego rising senior, and Jayla Jamison, the freshman from South Carolina, made their way to the next round after impressive showings. Brahe-Pedersen improved upon her U.S. No. 1 with a time of 22.95 in heat two, while Jamison scored a time of 23.01 in heat three.

Men's 400mH: Both Grant Williams and Kody Blackwood, the high school athletes from Texas, were just outside qualification to the finals in the event. Williams was fourth in heat two, while Blackwood was also fourth in heat three.

Men's 400m: Cincinnati freshman Steven McElroy put together an impressive race plan and earned himself a World U20 medal, finishing second overall in 45.65.

Men's 200m: Grand Valley State freshman Brandon Miller held his own in the final, finishing fifth overall in a time of 20.64 seconds.

The rising senior at Harding University (NC) finished out her mission, winning the World U20 Championships final in the 400mH with a new world-leading time in the U18 and U20 categories, posting a time of 56.16.