* Nigel Ancrum in the 100m on Friday during the prelims

GREENSBORO, N.C. -- Nigel Ancrum may have been in the National Elite section of the 100m on Friday at adidas Outdoor Nationals, but the former South Carolina state champion from Spring Valley (SC) looked more like one of the nation's top young sprinters during the iconic sprint race.

The high school junior hit all the right notes en route to a blistering wind-legal time of 10.40 -- the second-fastest time of his career -- as he pressed through to the finals.

By the evening hours, Ancrum once again punched his timecard, clocking a winning time of 10.56 seconds to take the National Elite section.

It was all part of the overall plan, he said: Six races over two days, with more work to come in the Championship sections on Saturday in the 100m and 200m.

"I felt good. I felt like this was a warm-up to see where I'm at," Ancrum said.

It was easy to see how Ancrum, who had run in just two meets prior to this weekend's action, was in league of his own: He was a full two-tenths faster than the next best athlete, Josiah Wrice, in the prelims.

"I'm just trying to get faster, time by time," he said.

Wrice, a junior from Butler (NC), ran 10.61 in the prelims while West Henderson's Brendan Henby was third in the semifinal round in 10.78.

A total of 14 boys broke 11 seconds in the National Elite section.

Girls National Elite 4x800m: This one was the BK Throughoughbreds show. The foursome from Union, Kentucky crossed the finish line in 9:52.38, securing the win by nearly 30 seconds -- in fact, they were the only team under 10 minutes. Indian Hills, hailing from New Jersey, were the runner-ups in 10:20.08, while the West Henderson, North Carolina girls were third in 10:51.15. Race Video.

Boys National Elite 4x800m: It was a wild finish down to the line, with the New Jersey-based Cedar Creek hauling to the line in a winning time of 8:00.61. T.C. Roberson, of Asheville, North Carolina, was second in 8:01.00. The New Jersey-based Indiana Hills was third in 8:17.89. Race Video.

Shakayla Lavender's 100mH performance in the finals on Friday was the No. 2 8th-grade effort of all-time

Girls National Elite 100mH: Rising Oscar Smith High School freshman Shakayla Lavender made a statement in the prelims of the 100mH, scorching the track for the second-fastest eighth-grade time of all-time in 13.65 (+1.5). Denisha McLaurin was second in 14.47, while Arayana Ladson was third in 14.50.

Girls Middle School 100mH: Amarachi Chukwu led the way, posting a new personal record time of 14.76 seconds over the 30-inch hurdles. India Wilson, of Greensboro Day, was second in 15.92 while Gabby Smith was third in 16.06.

Boys Middle School 100mH: Grant Inman, Timothy Alston and Jude Adderley were first, second an dthird during the prelims on Friday, hitting times of 14.66, 14.70 and 14.74.

Girls National Elite One Mile: It came down to a foot race over the final lap between Christiana Coleman (Dillard, FL) and Katrina Ford (Northern Guilford, NC), but it was Coleman who pulled ahead with 50 meters to go to take the win in 5:08.67. Ford came through in 5:09.25, followed by Alexandra Raquet of Sickles (FL) in 5:13.58 for third. Race Video.

Boys National Elite One Mile: Two heats, two times separated by a hundredth of a second. Dan River's (VA) Asa Fletcher, the reigning VHSL Class 2 champion in the 800m and 1,600m, claimed the overall win in 4:20.69, while Blacksburg's Conner Rutherford was second in 4:20.70. Rutherford ran in the final heat. Jack Klein was third in 4:22.61.

Girls Championship Swedish Relay: Elizabeth Seton started to gap the field on the 300m leg, but a strong 400m anchor leg from War TC put them in the lead to finish first in 2:14.55. 2:18.44 for Elizabeth Seton held for second. Race Video. 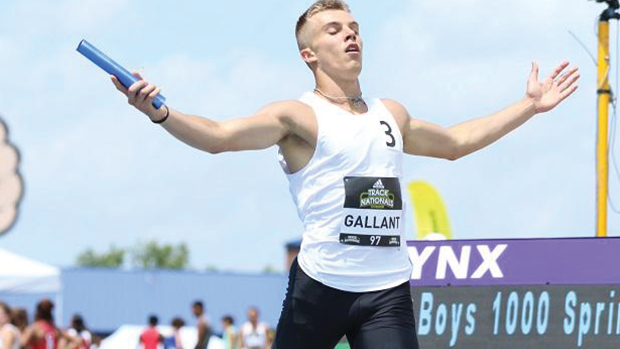 Boys Championship Swedish Relay: Blacksburg (VA) conjured up one of their best team efforts of the year on Friday, clocking a winning time of 1:54.54 -- a full three seconds faster than the second-place team -- behind the efforts of Cristian Dennis, Jason Omari-Anim, Austin Rice and Austin Gallant. Gallant, the reigning VHSL Class 6 champion, anchored the performance on the track. Nansemond River was second in 1:57.31, while Cuthbertson was third in 1:57.79.

Girls Championship 200m Heptathlon: Georgia-based Kayleigh Stargell earned 809 points in the last heptathlon contest of the day by clocking an event-best time of 25.86. It's a close competition going into the event's conclusion tomorrow, as Stargell leads the way with 2,570 points, just ahead of Walker Track Club's Rashni Walker with 2,695 points.

Girls National Elite 4x200m: Led by Shakayla Lavender, Track 757 won the event in dominant fashion, clocking a time of 1:40.62, over a second faster than the foursome from Middle Georgia Impalas in second.

Boys National Elite 4x200m: The Middle Georgia Impalas got redemption in the boys event, taking the win in 1:30.31. Battlefield's team of Richard Shearn, Piece Collins, Cristian Dennis and Logan Archer was second in 1:31.08.

Girls Freshman 400m: Cymia Yourish of St. John's College High School ran a new personal best of 56.26 to come away with the win, ahead of of D-Elite Track Club's Mariah Ivery, who finished second in 56.50. Arie'anna Rufus was third in 57.43.

The program from Virginia won its first ever relay national title, according to anchor leg Austin Gallant.

Cristian Dennis, Jason Omari-Anim, Austin Rice, and Austin Gallant won the event in 1:54.54, which was two seconds shy of the national record of 1:52.39 by Parkview (GA).

Boys Freshman 400m: Poly Prep Country Day's (NY) Kofi Rossi crossed the finish line with a grin on his face as he not only won the freshman 400m title, but did so in a new personal best time of 49.63. Farraj Al Amin of Freedom (Woodbridge) in Virginia just missed out on breaking 50 seconds, coming in second in 50.06.

Girls National Elite 100mH: Shakayla Lavender threw down not one but two marks for the record books in the span of mere hours. The Oscar Smith HS rising freshman followed up her stellar prelim performance with yet another all-time showing in the finals -- 13.60 -- to best her U.S. No. 2 all-time eighth-grade performance set in the rounds earlier in the morning. Behind Lavender, Windsor Elite's Arayana Ladson took second in 14.52, just ahead of Prince George's Brooklyn Robinson in third.

Boys National Elite 100mH: It was a battle to the line between juniors Charles Wall-Davis and Jamiel Bowers, but it was the War TC's Wall-Davis who edged Bowers out at the line for the win in 14.33. Freedom (Woodbridge) senior Carl Gaines wasn't too far behind the duo in 14.44 for third.

Girls National Elite 400m: House of Elite's Skyler Franklin was the sole girl in the competition to dip under 55 seconds, running 54.68 for the national elite title. Nyah Harrison of Nansemond River was second in 55.41 while Cannon School's Teri Pridgen was third in 56.20.

Boys Freshman 100m: It was a wire-to-wire win for Rahkeem Faison of the NC Flight Club, who outlasted Steph DeGregorio by a hundredth of a second. Fiason won in a time of 11.07, while DeGregorio was just a hair behind with a time of 11.08 seconds. Virginia's Malachi Coleman was third in 11.15 seconds.

Girls National Elite 100m: It was the JaMeesia Ford Show as she crossed the line in 11.59 seconds. She was the only girl to break 12 seconds overall. Alaya Gillespie was second in 12.08 seconds.

Girls Middle School Elite Two Mile: From the start to the finish, Kyleen Brady led, racing her way to an eighth-grade No. 11 all-time effort of 11:08.47. Anna Pucilowski had a strong finish with 800m to go. She finished with a time of 11:10.03.

Boys Middle School Elite Two Mile: 9:58.95 is what it took for Marcelo Mantecon of Belen Jesuit Preparatory to win this division. This ranks him as No. 4 all-time for seventh grade. He was the only boy under 10 minutes.

Girls National Elite 1,600m Sprint Medley Relay: Big moves were made in the last 100m of the SMR. Metrolina Christian Academy finished with the victory in 4:15.37.

Boys National Elite 1,600m Sprint Medley Relay: Purpose Driven NC Elite had a stellar performance to cap off the evening, clocking a time of 3:33.57 to take the victory.

Boys Freshman Two Mile: Glen Allen's (VA) Trevor Lawson clocked a winning time of 10:00 flat to take the win. It was over 30 seconds ahead of runner-up Achilles Shui, who had a finishing time of 10:32.19.

Boys Championship 5,0000m: For large stretches, Spenser Wolfe maintained control. But as the pace toggled, Center Grove's (IN) Parker Mimbela made one last move with 400 meters left, winning in a new personal best time of 14:58.87 and moving into the top 25 rankings nationally on the season. Forest Park's (IN) Spenser Wolf was second in 15:04.04, while Hayes Trapp was third in 15:33.30.

PHOTO(S) OF THE DAY * East Burke's Kenneth Byrd wins the pole vault with a clearance of 4.73 meters on Friday