* Jace Posey of Houston Strake Jesuit set a new conference class record and became US No. 1 in the high jump at the UIL Outdoor Track and Field Championships

It's one thing to set a personal best at the state championships. It's another thing to grab the conference record, the state title and a US No. 1 performance all in one meet.

That's exactly what Jace Posey did at the UIL 6A Outdoor Track and Field Championships in the high jump, setting the eighth-best high jump mark of all-time with a leap of 7 feet, 4.5 inches. It was the third-best jump in Texas history.

And the three-star basketball recruit from Houston Strake Jesuit (TX) did something the state hasn't seen before at the state championships. 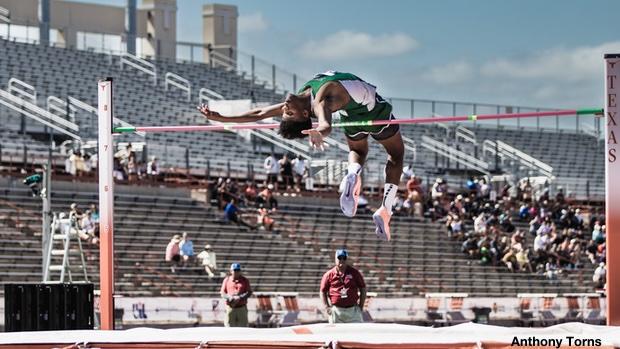 It seemed like a no-brainer as he was in serious momentum with clearing every bar he set for himself.

With the crowd on its feet, he soared over the 7-4.25 bar and he did it with ease. Posey moved up from US No. 10 to the nation's No. 1 high jumper and became the seventh boy over 7-feet this spring.

He took three attempts at 7-5, which resulted in misses.

This was a huge improvement for Posey as he entered the meet with a 6-10 personal best from the Texas A&M Bluebonnet Invitational from March.

* Jace Posey after his 7-4.25 clearance at the UIL Outdoor Track and Field Championships