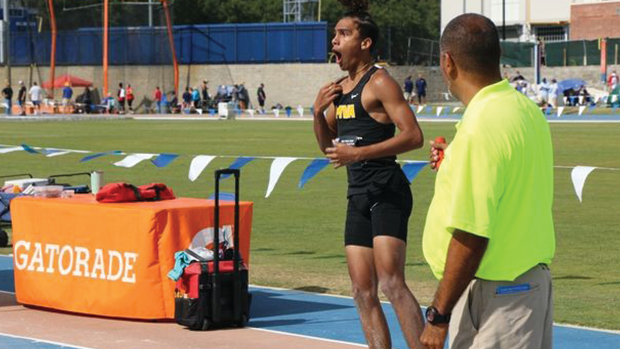 * Micah Larry secures the win in the 100m on Thursday

Montverde Academy may be on to something.

The private school from Central Florida has seen enormous success in 2022, first in the breakthroughs of Zyaire Nuriddin and Micayah Holland -- who have blossomed into certified high school stars -- to now, within the last few weeks, watching the emergence of Micah Larry.

Larry, a North Carolina native who transferred into the program this year, has exploded into one of the country's biggest stars in recent weeks.

On Thursday he added to his dynamism by winning three individual FHSAA Class 2A state championships in the 100m, 200m and long jump.

It was in the latter event, however, where Larry went into a different stratosphere.

The high school junior left everything out on the table in his final attempt of the day, hitting a wind-legal mark of 7.91 meters (25 feet, 11.5 inches) to secure the eighth-best long jump in high school history. It was a new Florida state record.

That's also the 36th-best mark in the world prior to this weekend. Only 14 college athletes in the NCAA have done better in 2022 thus far.

"Mindset has changed a lot since moving down here," he said. Just not even expecting to win. Just expecting to execute. I've been executing. Keep relaxed. Don't tense up and just do what I've been doing. And the other things will follow."

Previous to Thursday, Larry's career best mark was 24-9. That came in his regional competition. So clearly, Larry has tapped into something special.

"Being in lane seven isn't always the most fun lane. But I knew I had it in me to beat any one of those guys. And I knew my team really needed me to come in first. So all I was focused on was getting out quick, dah-dah-dah-dah-dat, my feet go like that. That's how I had it in my head."