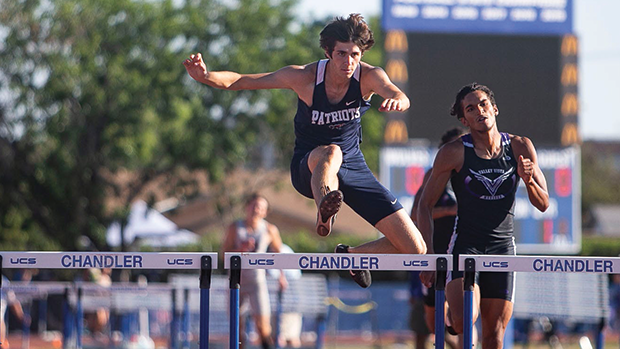 At the very beginning, QB1 was a passive promoter of track and field.

Track was what prepared him for him for his other love.

For 13 years, in fact, QB1 was all about football, learning the art of the three-step drop, avoiding would-be tacklers, throwing bombs, hitting targets in stride for touchdowns. QB1 threw for 2,762 yards and 36 touchdowns in his final year with the American Leadership Academy of Queen Creek, leading his program to a coveted playoff position in Arizona -- against the major public schools. His head coach was Ty Detmer, the former NFL quarterback.

Then came success on the oval.

And so, perhaps things started to change for Logan Hubler when he began to realize just how talented he was with that other project of his.

Perhaps his dream of playing NCAA Division I football morphed when major programs came calling ... for track and field.

Maybe he needed a little pinch to believe that it was real. But eventually he did, signing with Brigham Young University, one of the top men's programs in the NCAA.

"It definitely wasn't an easy decision, by any means," Hubler said recently. "I've played football for 13 years of my life. I was doing track in the beginning to get better. It was definitely hard to choose between each of them and realize I could have a future in track instead of football.

"As you compete more, though, you look at what can be better for your future," he added. "As I slowly grew my love for track, I decided that's what's right for me."

Next weekend, Hubler finds himself on the cusp of two more state championships in Division III ahead of the Arizona Interscholastic Athletic Outdoor Track and Field Championships on May 14 at Mesa Community College. His squad ALA Queen Creek, could also claim a team title.

He's lost just twice in the hurdles this season, picking up 14 wins across 16 tries.

But that was just the beginning.

In many ways, Hubler is still raw and new to the sport.

When asked recently, he wasn't even sure that national high school track and field championships existed, or whether he would be going at the end of his final season. Brooks PR? "What's that?"

He hasn't focused on the rankings, state or nationally, instead choosing to zero in on his training every day. Monday, Wednesday and Friday? He has 110mH workouts.

"Who's leading the nation?" he said. "I try to just focus on what we're doing while I"m in season. You want to stay focused."

Of course, being raw can be a good thing. That means a ceiling is still growing. Just this past week, Hubler ran a wind-legal personal best in the 110mH, crossing the line in 14.28. He's closing in on sub-14.

But this year has presented Hubler with his first without football in the backdrop. There has been no spring ball. He's not slinging it to his favorite receiver.

Form, technique, precision? All of that will be refined at BYU. Right now, he takes eight steps to the first hurdle. His lead leg is his right.

With the 300mH, he's working on volume and endurance. Right now, he's 13 steps to the first hurdle, and then he tries to hold on as he fatigues. He's working on pushing his trail leg to the ground faster.

"If my steps do go off, we've worked on switching legs," he said. All of this is a massive change in direction for an athlete who, even over the summer, was still dreaming about football. He piqued the interest of some smaller programs. But when a dream school comes calling, even for the other sport, how do you not hear them out?

What helped Hubler, who had a 68-yard touchdown run against Hamilton in November, was his school's coaching staff. Detmer won a Heisman trophy with BYU. His offensive coordinator, Max Hall, also went to BYU and was a prolific football player.

"The culture I came into," Hubler said, "they all loved BYU. Me experiencing all that, it made me fall for the program."

It's hard not to think that potential exists for the 6-foot-1 hurdler.

Back in November, he took a shotgun snap, cut into the grass, evaded a tackler and then burst right down the middle of the field untouched.

Sure, that was QB1 to the end zone. But it also looked very much like the makings of an elite hurdler.

"As I fell in love with the sport, as I raced more and competed more -- it's super technical sometimes, it's a mental battle sometimes -- the best feeling, especially when you're on the relays, is you knowing you've given you've given everything you've got," Hubler said.