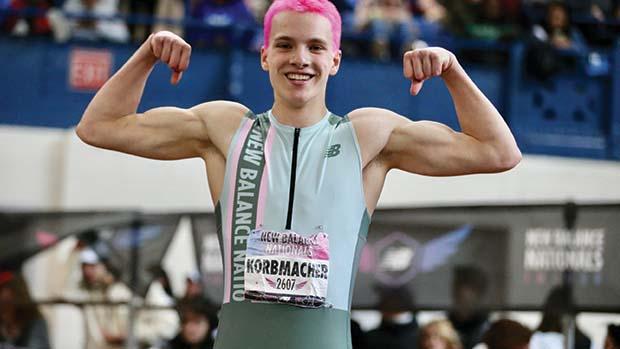 "Last year, I qualified for the AAU Indoor National Championships in the 60mH, and ever since that, it's really been like, 'I can make this dream happen.' " -- Andre Korbmacher

It all started with a bet.

Ahead of the AAU Indoor National Championships in March of 2021, Andre Korbmacher made a deal with a teammate that, should he qualify for the 60 meter hurdle final, he would bleach his hair.

He proceeded to run an 8.69 in the qualifying race and an 8.64 in the final to finish second.

He owned up to his promise.

But after running one of his best races, Korbmacher then made another decision that has since formed a defining staple of his career: He decided to keep bleaching his hair, which recently morphed into a pink 'do.

And yet, a new hairstyle wasn't the only thing the current Squalicum (WA) High School junior took from the meet, either. He left Virginia with the belief that he could succeed at the highest level, and against anyone.

"Last year, I qualified for the AAU Indoor National Championships in the 60mH," Korbmacher said, "and ever since that, it's really been like, 'I can make this dream happen.' "

After going head-to-head with some of the nation's top runners, the Washington State native enters this outdoor track season with hopes of breaking the wind-legal state meet record of 13.86 by Cecil Bowie, which was last set in 1986. The top wind-aided performance is 13.67, which Nate Bennett-Jones ran in 2017.

Korbmacher says he's eyeing up a wind-legal time of 13.50.

Things have happened recently which indicate he may get there sooner than expected. In March, Korbmacher won the 60mH at New Balance Nationals Indoor in 7.70 seconds, which was the No. 1 time in the world for U18 athletes, the No. 2 effort for the U20 category and a top 100 performance for, well, anyone.

Looking like a blur across the finish line, his pink hair only complemented his talent.

Korbmacher didn't stop there. Recently in April he edged past one of the nation's top competitors in the high hurdles, St.  Mary Stockton's (CA) Jadyn Marshall, at the Arcadia Invitational -- one of the largest regular-season invitationals in the country. He set a new PR of 13.84 in the 110mH.

"I like the extra hurdles because it's more time to think about what I'm doing," Korbmacher said of why he's drawn to the 110mH. "Sixty is kind of gone and done, and 110, I really like that it is a little bit longer."

While he is an elite hurdler with big aspirations, Korbmacher's favorite part about the sport is the shared camaraderie.

"I love the whole track community," he said. "All the kids that I've met and raced against, we keep in touch, and we're still friends. It's just a good community. I love just meeting new people and meeting different talented athletes that push me to be my best."

"I eat, breathe and sleep track. I'm not really into any other sports, so when March Madness was happening, I was still just watching track videos."

It's easy to look at someone like Korbmacher, who's prolific and extremely polished, and forget that the accolades are the culmination of hours of training and preparation. There's more than just talent here.

"Most track and field athletes enjoy the sport, but he loves it," said Erin Hoopes, Korbmacher's head track coach at Squalicum High. "He puts time and effort into it year-round and wants to learn more about it. He is a track and field guru; he's always interested in gaining knowledge and expertise about the sport."

This March, for instance, Korbmacher was busy watching his track performances back on rewind, and not the NCAA tournament.

"During March Madness, most people were looking at basketball games at our track meet," Hoopes said, "but he and his friends were looking at track videos, which you don't usually see a whole lot unless someone's really passionate about the sport."

Behind The Ongoing Historic Season of Dalia Frias

Cade Flatt Wants The Smoke. It Just Might Make Him Better.

The Homeschooler Who Made A Name For Herself In The Mile

This Twin Tandem Has Massive Sprint Potential In 2022

The Next Erriyon? This Mississippi Sprinter Is Driven

Korbmacher says he would rather focus on improving his form than obsess over the status of his bracket.

"I eat, breathe and sleep track," he said. "I'm not really into any other sports, so when March Madness was happening, I was still just watching track videos. I was just studying professional athletes' forms and just how they race and what they do to be great."

So far in his track career, there have been wins and losses, but the results are less important to Korbmacher than the preparation it takes to have success.

"Before the line, I kind of just clear my head and just think only about what to do right, not about winning, not about losing, just executing," he said.

And hurdling is something Korbmacher could do again and again, much further than high school.

A self-described "uncoordinated hurdler" when he first started, Hoopes says Korbmacher's training habits will help him prosper at the next level.

"He's a good example of putting in the time year-round to be good and excel at something," Hoopes said. "So a lot of his success is all his own doing."