VIRGINIA BEACH, VIRGINIA -- For the first time since 2018, a high schooler cleared 18 feet in the pole vault during indoor competition.

What was expected to be a matchup between the two best high schoolers in the U.S. this weekend at adidas Track Nationals found itself squarely focused on just one athlete on Saturday afternoon inside the Virginia Beach Sports Center. 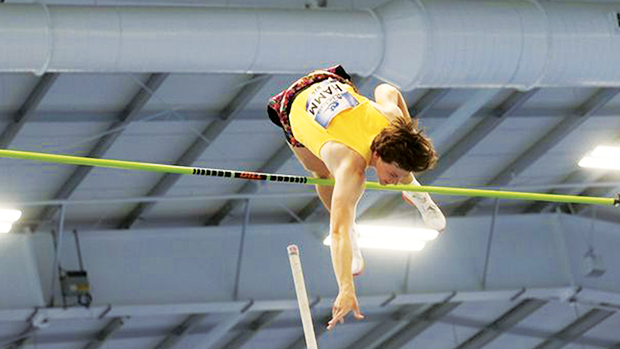 Hamm now stands tied at U.S. No. 2 all-time for indoor competition with his effort, alongside Zachery Bradford, who cleared 18-0.5 in 2018 at New Balance Nationals Indoor.

The rising Alabama (AL) star and recent state champion made one last effort indoors at adidas Track Nationals, doing so after already clearing 18-1 outdoors to begin his outdoor season.

That confidence may have been just what he needed. Hamm, a 16-year-old high school junior, came into the competition after everyone else had attempted-out and preceded to clear his first bar at 16 feet, 11.75 inches.

Hamm gripped up and made his first attempt on the 198 pole he had been using for weeks now, coming up just short. At that point he made a decision to jump to a new implement, a stiffer pole that was the same size.

"It was just stiffer," he said.

A miss on his second attempt forced one last effort at the height.

Hamm made his run and narrowly passed over, the bar bouncing just slightly as Hamm descended. It stayed.

"That was my first time I've ever jumped on that pole actually," he said.

Hamm made three more tries at 18-4.50, which would have netted him a World U18 best for the event.