Kenan Pala is a senior at Francis Parker (CA) High School in San Diego, California. He was the CIF Division 5 state champion in cross country and a national runner-up at the Eastbay Cross Country Championships on Dec. 11, 2021. He is set to join the Ivy league in the fall at Yale University, where he will also suit up for the Bulldogs' distance programs. Over the last year, his rise across the national distance running ranks has been stark, with benchmark after benchmark cleared. He owns personal best times of 4:20.77 in the 1,600m and 9:02.92 in the 3,200m and scored a Division 5 record at the CIF State Cross Country Championships in November with a 5K time of 14:51.00. With one more track campaign remaining, Pala could surpass even his own expectations. He wrote this Dear Running essay for MileSplit ahead of his last season.

"I had been dreaming of competing on a national level since freshman year, and I was about to get my shot. However, it wasn't a goal time or place I was chasing. This would be my last high school cross country race: I wanted to give it everything."

On December 11, 2021, I woke up at exactly 6:00 a.m. PST and immediately started my pre-meet routine. I put on my race-day playlist, solved my Rubik's cube five times, and ate my four, untoasted, plain Einstein bagels. The Eastbay Cross Country Championships were later that day, and only a few hours away, but the countdown was irrelevant. I had been dreaming of competing on a national level since freshman year, and I was about to get my shot. However, it wasn't a goal time or place I was chasing. This would be my last high school cross country race: I wanted to give it everything.

The week leading up to the championship, I decided I would collapse across the line. There had been plenty of races where I finished with more left to give, and so I was determined that day to discontinue that trend. I'd practiced through the downpour, before the sun rose and even after it set, all for this moment. The work was paying off. I had made it to nationals, and that alone was worth smiling about.

During freshman year in 2018, my goal was to run 9:45 in the 3,200m. At the league meets, invitationals and conference championships, I consistently came close to the mark but never attained it. When the city finals came, I knew I had one last chance to beat my own expectations. In the weeks leading up to that race, my high hopes drove me to the track every day, determined to prove I could do anything and everything necessary to achieve my goal time.

I went into the finals with full confidence; I had done all the preparation I needed. Was I going to PR? Of course. Was I finishing under 9:45? No doubt.

While mourning the loss of an ideal end to my first high school track season, I turned my disappointment about what could have been into an opportunity to reflect on what I could build on. Taking the time for introspection, I realized training on its own wouldn't be enough. Real improvement would come only if I changed my mindset.

Running, your lessons haven't been easy, but you've taught me grit and perseverance. Being able to push through the shortcomings, even after putting in ample work, is something I never knew before you. You've made me more attuned to growth. You've helped me recognize success isn't an overnight phenomenon but something that takes time to manifest.

I often tell people that I'm grateful for you because running is something I get to do. Running has never felt like a burden. I've never felt like I've had to do it. Being able to test my limits daily and push myself to absolute exhaustion is a privilege, and the constant challenge makes me a better person, both on and off the track. To have something like this, I'm incredibly fortunate.

Taking the time for introspection, I realized training on its own wouldn't be enough. Real improvement would come only if I changed my mindset.

I don't plan to ever stop entering every competition without a desire to push those boundaries and reach new heights. It doesn't matter what the time is when I cross the line because, if I know I've given it my all, I've got nothing to be disappointed about. And in the heat of the race, when the world around you blurs and your mind goes blank, I'll always remember one thing: Running, you've taught me to keep smiling.

Under the lights of Arcadia in 2021, I wasn't fixated on a top finish or a record time. To me, it was about keeping one foot in front of the other and smiling. While the meet was certainly a test of all the preparation that I had put in, it was more importantly a chance to push myself to the maximum and have fun while doing it. And when I couldn't sleep after the race, it wasn't out of frustration for just missing sub-9, like I might have been after city finals two years prior. The adrenaline was what kept me up. I was already thinking about cross country season. As I climbed the final peak, Reservoir Hill, at Mt. SAC, I didn't turn back to see how far behind my competition was. I was only thinking how grateful I felt to be there at that moment. As I crossed the line with my arms up, I was informed I had missed the course record by 0.8 seconds. But I didn't sulk in disappointment. I smiled with joy. People approached me and asked if I was frustrated. In return I asked them, "About what?" Sure, I  had just missed the record, but it was by less than a second! That was something worth celebrating.

And in the heat of the race, when the world around you blurs and your mind goes blank, I'll always remember one thing: Running, you've taught me to keep smiling.

Running, you've taught me optimism and how to see the light in it all. And like my smile, my admiration for you will never falter, even through the ups and downs.

Toeing the line at Eastbay with the nation's best -- and wearing my neon green West jersey -- my dream was finally realized. When the gun went off and the race was underway, I gave absolutely everything for those 3.11 miles. I can't tell you how it all happened or what I felt because all I remember is that, as I went through the finish and collapsed on to the grass, I was beaming. Smiling not because of my time or my place, but because I was doing what I loved.

Running, thank you for everything thus far, but we're not done yet. On to the next chapter. 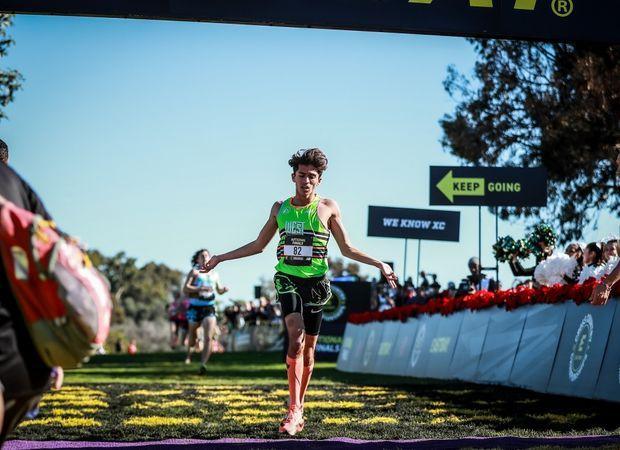