VIRGINIA BEACH, VIRGINIA -- For a moment, it almost looked as if Will Sumner was out of the race.

And then just like that, a snap of the fingers, the mood changed.

The Woodstock (GA) High School senior and University of Georgia recruit -- recently debuting at No. 1 on the MileSplit50 -- flipped a switch and took over, racing around Nikolas Butler-Simpson and Jayson Ward in the final lap of the boys 500m championship en route to the first national record of The VA Showcase on Saturday and clocking a new high school best of 1:01.25.

It's currently the fastest time in the world according to World Athletics.

Sumner's performance re-set the record of 1:01.70 had stood for 10 years. Last accomplished by Christopher Columbus (NY) graduate Strymar Livingston, it had long been tested and almost seemed out of reach.

L.C.  Bird's Jayson Ward, who owned a national lead of 1:03.32 entering Saturday's action, was second in 1:04.32. Both were tested by Butler-Simpson, who came out of the stagger in the lead and held the inside position throughout. The Bishop McNamara athlete from Maryland was third in 1:05.28.

Interestingly enough, Sumner had never run a 500m prior to the weekend.

Sumner now owns three national leads -- at least for the time being -- and is ranked in the top five in another event. 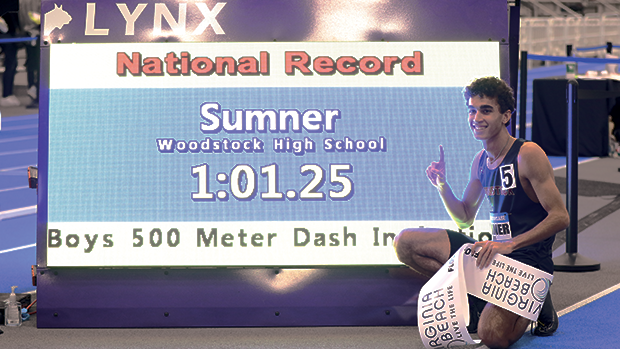