VIRGINIA BEACH, VIRGINIA -- In the first indoor race of his career -- and equally the first of his 2022 season -- Nease (FL) High School senior Rheinhardt Harrison authored the second-fastest 1K performance in high school history at The VA Showcase.

He was less than 0.50 seconds away from the current national record of 2:22.28, which was accomplished by Manalapan (NJ) graduate Robby Andrews back in 2009. It immediately became a Florida record and is currently the 12th-fastest time in the world based on World Athletics results.

After pressing in the first 150 meters to secure his position, he settled in and began to go to work, clocking off splits as he chased the national indoor 1K record record owned by Robby Andrews.

He clocked an opening 56.09 in the first 400 meters as he formed a significant gap, then rolled on, hitting the next two 200ms in 28 and 29 seconds, respectively.

Harrison clocked a final 200m of 29 seconds to secure his position all-time.

Dylan Look, who entered with the nation's top time at the distance, was second in 2:28.14 while Centennial's Antonio Camacho-Bucks was third in 2:29.41. Hanover's Ethan Coleman also went under 2:30, producing a time of 2:29.76. The top five times re-set the national leaderboard.

Historically, the 1K has been a hard record to break. Only Matthew Payamps came close in 2019, clocking a No. 2 time of 2:23.46. Only three efforts in the last decade had even been among the top 10 times overall. 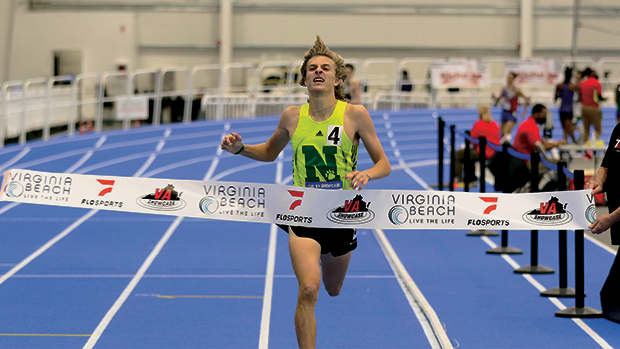