The Westerville Central (OH) senior and University of Southern California track and field recruit -- the No. 1 ranked recruit in the Class of 2022, in fact -- looked as impressive as ever in the adidas Indoor Nationals 200m qualifier at The VA Showcase, securing the nation's top time with a time of 21.29 seconds.

It lowered his previous best of 21.32, which he achieved on a flat 300m track in February of last year at the SPIRE Scholastic Showcase, and it came just over a month since his season debut in December in Ohio.

In winning the heat, Braun also defeated Jordan Anthony, who is the fourth-fastest returner in the 200m from the previous outdoor season and whom had broken 21 seconds twice -- both wind-assisted and wind-legal -- over his final weeks of the spring season.

Braun barely pressed as he gained control from the start and then settled in, floating around the final turn. With a significant advantage in the final straightaway, he used long strides to take it home. Anthony's performance shouldn't be discounted, either.

His performance was his first under 22 seconds indoors and was just his first 200m of the 2022 season. He has one event remaining at The VA Showcase and will look to compete for a win in the 55m/60m. 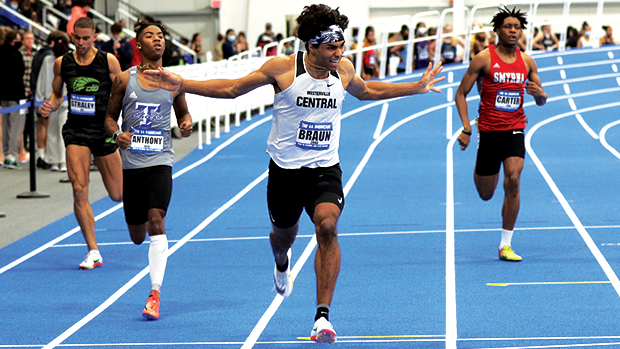