But Hartland's (MI) Riley Hough was afforded one on Saturday at the Eastbay Cross Country Championships, and he wasn't going to let a little thing called 'pain' get in his way.

After a fifth-place finish at last week's Garmin RunningLane Championships -- his lone defeat of the season -- the former MileSplit50 No. 1 ranked Hough rebounded at Eastbay with a furious last quarter-mile at Balboa Park to win the national individual crown in a time of 15:11.40.

But while the Michigan State signee looked comfortable down the stretch, Hough said he was anything but as he fought through "immense pain" to take the title and give himself a happy ending to his senior cross country season.

"Be prepared for the immense pain that it comes with," Hough said of his final surge. "The pain that you feel at the end of the race is like nothing else. You literally can't describe it, so you just have to push through it in that last 200."

The race came together perfectly for Hough, recently ranked No. 5 on the MileSplit50. He was happy to let others exchange the lead and make moves in the opening two miles.

"I knew I wasn't going to lead it the whole way," Hough said. "I was just planning on staying behind the whole time and making a final push no matter where I am."

When Hough made his move to the front, it was if he was shot out of a cannon.

"Not fresh at all, actually," he quipped. "I was on the verge of slowing it down because it was a very big struggle."

The last downhill isn't as easy as it looks: "You would think that it would be a little refresher, but actually it uses a lot more out of you because you're going down so fast that you really have to pay attention to where you're placing your feet."

But Hough made it look awfully easy, even if he wasn't feeling great in the closing quarter mile. Hough's ability to embrace that pain resulted in a national title during one of the more thrilling boys finishes at Eastbay in recent memory.

Let's rewind just a week, though.

"With all this great competition (at Eastbay), everyone's around each other. You really don't know what's gonna happen in the race. So I was just putting in my mind that I was gonna go out there, give it my all, and no matter what place I get, I'd just be happy." -- Riley Hough

In what turned into the fastest high school 5K cross country race ever at the Garmin RunningLane Cross Country Championships on Dec. 4, Hough battled up front with the nation's best, ultimately settling for fifth. Newbury Park -- quite arguably the greatest team ever -- took the top three spots and were led by Colin Sahlman, Leo Young and Lex Young. Colorado's Zane Bergen was just ahead of Hough, taking fourth.

"I knew going against Newbury Park was going to be a very big struggle," he said. "So I put in my mind that I'm going to go for my best, no matter what placement."

But Newbury Park was out of the picture for Saturday at Eastbay. 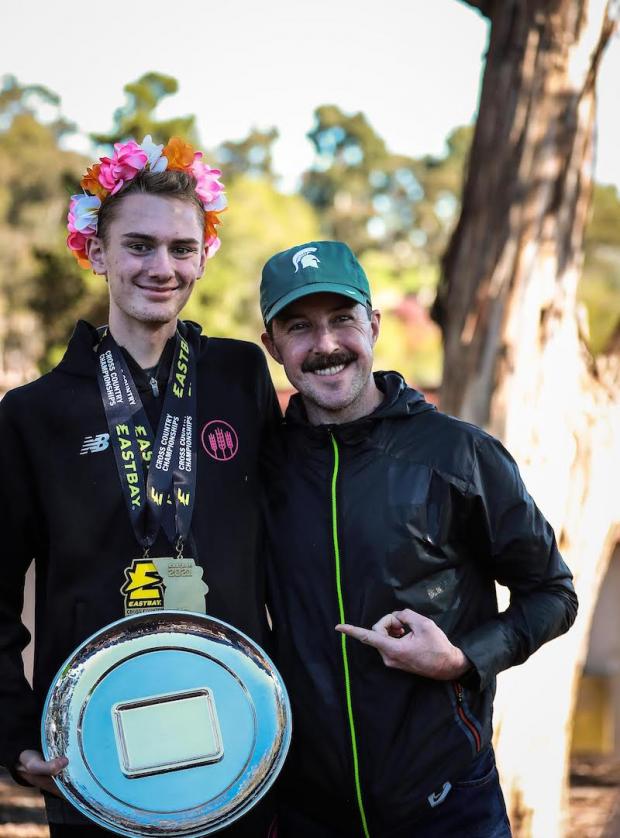 Bergen was back in the Eastbay field, along with fellow midwesterner Kole Mathison of Indiana. So were Northeast threats Gavin Sherry of Connecticut and Marco Langon of New Jersey. Knowing this, Hough's mindset remained the same.

"With all this great competition (at Eastbay), everyone's around each other. You really don't know what's gonna happen in the race," Hough said. "So I was just putting in my mind that I was gonna go out there, give it my all, and no matter what place I get, I'd just be happy."

Sherry took the race out from the gun, and he was the first one to make a move. But it was Mathison who made the second. The Carmel (IN) junior went to the front around the half mile mark and put a bit of a gap on the rest of the field.

But the main group of challengers didn't let him get too far ahead, and they reeled him back in at the summit of the hill around the mile mark.

From there, a group of six splintered away at the midway point of the race. That front pack included Mathison, Hough, Sherry, Bergen, Oregon's Tyrone Gorze, and hometown kid Kenan Pala of San Diego.

At one point, as they crossed the start area to start the second of two loops, they were virtually six abreast. Those same six traded off the lead through two miles. It was one mile to glory, and Hough was waiting for his opportunity to make his move.

But first Sherry would make his play for the win.

Around the two mile mark, Sherry was able to gain a little distance between himself and the rest of the five challengers. It looked like he was about to runaway with it.

And yet, lurking in the last half mile was that second time up the hill at Balboa Park. Hough and Pala brought Sherry back, and it would be those three who battled on the steep downhill.

Right at the base of the hill Hough went to the front, and his long strides were a direct contradiction to Sherry's shorter steps.

The momentum never wavered for Hough, who turned a half step lead into a 15 meter advantage as they crossed the road with about 400 meters to go.

"It was a gutsy race," Sherry said after the race about his move at two miles. "It was what I was planning to do -- just make it tough -- and finish on empty, and I certainly did."

Unfortunately for Sherry, he was on "E" a little too early as Hough kicked it into a higher gear and powered home for the win in 15:11.

Pala passed Sherry for second in 15:14 and Sherry came across at 15:17. Bergen, who defeated Hough at RXC2, was fourth overall.

Hough finished his season with a win, and a national title. What a second chance it was. Natalie Cook's Dream Evolved, And Then She Won Nationals