Bryan Deibel sprinting around a 200 meter indoor oval while carrying a stabilizer camera as he tried to keep up with future Olympic gold medalist Athing Mu.

Nearly five years together, we've told all kinds of stories across the United States. From a profile on a cross country team along the border in Texas, to a spotlight on a race-walking phenom in Ohio, to a feature on a Norwegian pole vaulter in California.

But Bryan trying to keep up with Athing-Damn-Mu around the Princeton indoor track in February of 2020?

That's the one that sticks with me.

His shirt soaked in sweat. Hair matted. Athing giggling after the rep. Al Jennings nodding his head in approval. Deibel looking defeated, knowing he's got a few more reps to go. You can actually hear Bryan panting at one point in the feature (clip below).

Man, that's why you get into this line of work.

It is as much the passion Bryan holds for this sport as it is the work he's doing. His love for cross country and track and field drive him forward.

Which is all to say, that's the kind of memory I'll remember as Bryan transitions to another department in FloSports, focusing on the exact thing I just talked about. He's decided to move on from MileSplit in order to grow as a professional, working alongside other talented editors and videographers in our company's video department. At our national meeting last week, I asked Bryan to write a farewell column. I felt like it was important for him to have ownership of his own send-off and write a goodbye on his own terms.

You work so long with a company -- specifically within a unified part of the company and with certain people -- and you develop important relationships along the way.

But Bryan isn't really the type to make a story about himself. He opted for a quick sign-off on our weekly podcast.

And I respect that.

But I would be remiss if I didn't offer up a few memories before he leaves.

Bryan could probably open up his phone and see a mile-long-tail of phone numbers that he's amassed over his time at MileSplit. It would be a sea of coaches, athletes and parents.

He started with FloSports right around July of 2015, maybe a little over a year after his graduation from Edinboro University in Pennsylvania. He packed up his things and headed off to Austin, Texas.

He joined Flo and the MileSplit network with a deep understanding of the sport -- he's a 2012 Division II All-American in cross country, after all -- but he also entered with wide-eyed hopes from the other side of the camera, too.

He ultimately found out what it meant to be on the MileSplit team: Seriously long days of coverage, insane traveling schedules, weekly meetings, exhaustive pre-pros and barn-burning season-kick-off planning sessions. He covered the state of Texas for a little over a year from the jump, then moved to national in 2017 right as I came on board.

Why does Bryan's friendship matter so much to me?

By the time I arrived at FloSports in January of 2017, I was already 32. I was working my way through the media landscape, trying to find an environment that was both stable and a joy to work around. For anyone who has any experience in the journalism sector, you understand why that concept seems so foreign. But I was fortunate.

MileSplit, Flo, it's been a good place to grow.

Almost from the start, Bryan I started traveling. Over five years, we traveled to 19 states together. Coverage big-time championships, regional races, state championships.

We spent entire weeks covering Team Nationals and Foot Locker Nationals, spent days in New York City for New Balance Nationals Indoor and ended up in various hometowns across the United States, meeting families and talking to athletes. And we also made time to run, too.

We saw tumbleweeds in Turkey, Texas, for a story on small-town hero Jake Merrell. We learned about Islamic culture and a group of Muslim girls running cross country in Milwaukee. And we traveled to Phoenix in the dead of the pandemic to make sure athletes got the coverage, and the meet, they deserved.

Along the way, we ate, drank and talked a lot. Sometimes, we would run to the next spot. In Albuquerque, in fact, I remember us sprinting so hard on some back-street surrounded by food trucks that we lost one of our coworkers, Will Grundy, onward to our next spot.

I truly consider Bryan one of my closest friends. He's the kind of guy who sets a goal, regardless of the sacrifice, and gets it done. He's someone who gets up at 6 a.m. every morning to run with the same group of guys.

I can see why all of his college teammates showed up at his wedding. I understand why there's a workout called 'The Deibel' at our weekly running group in Austin.

Everywhere he goes, he builds community through running.

Even after he leaves and starts working with new video projects beyond MileSplit -- stories now featuring gymnasts, grapplers and football players -- I have no doubt he'll succeed. Because he has the heart for it, a passion that bleeds through.

If you've met Bryan along the way and he's had some impact on your life, whether by storytelling, an interview or anything else, I would encourage you to reach out to him and let him know. Email him at bryan.deibel@flosports.tv.

I know it would mean the world to him.

I know our friendship means the world to me. I'll miss ya bud. 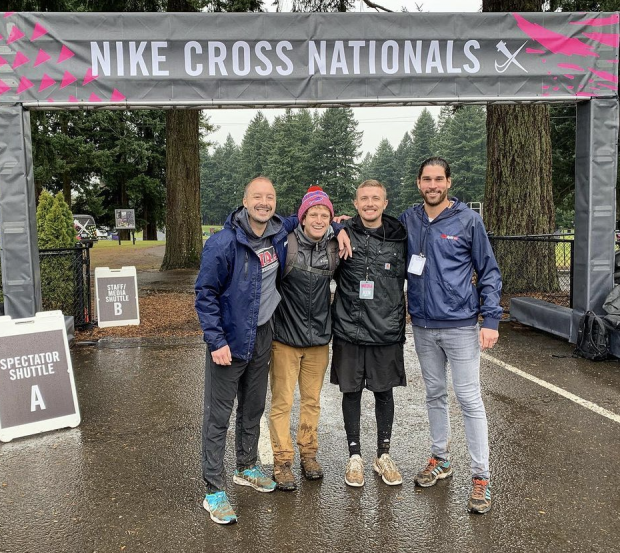