"He's got this next-level confidence where, if the pace isn't what he wants, he'll run his pace. He won't stay in the pocket. We saw that at regionals last year." -- Colin Sully

AUSTIN, TEXAS -- The towering stadium lights are beaming over Ed W. Monroe Memorial Stadium on a chilly Wednesday morning in September when Kevin Sanchez exits his SUV and begins the short walk down to the track.

But Sanchez, the Austin Vandegrift High School junior fresh off the biggest race of his career, doesn't take long before he tosses away his long tee and begins an early warm-up of two miles.

Here is where elite runners like Sanchez find themselves, training well before the morning light, in the hours when most are only first rising for the day ahead.

At this point in September, the 16-year-old Sanchez has hit some particularly huge benchmarks, with wins in his first four races before a fifth-place finish at the Woodbridge Cross Country Classic on September 17.

The Mexican-American student-athlete ran the esteemed 3-mile course in 14:06.00, which is faster than any Texan in history and fourth all-time at the distance in the state, trailing only the likes of Craig Lutz, Bryan Archan and Tristan Rodriguez.

"It's been really fun," Sanchez said. "I've been improving by a pretty good margin every week."

And so it's safe to say he's advanced into the elite-tier of high school runners far earlier than most projected at this stage of his career. But now he finds himself firmly in the hunt for a UIL Class 6A state cross country title this November.

"He's surprising himself every weekend," said Colin Sully, Austin Vandegrift's sixth-year head coach and a physics teacher at the school. "But I feel like that's going to change at some point this cross country season. We've been doing this too many weeks in a row now. I think he has the confidence. He has the swagger where he expects to win every time." 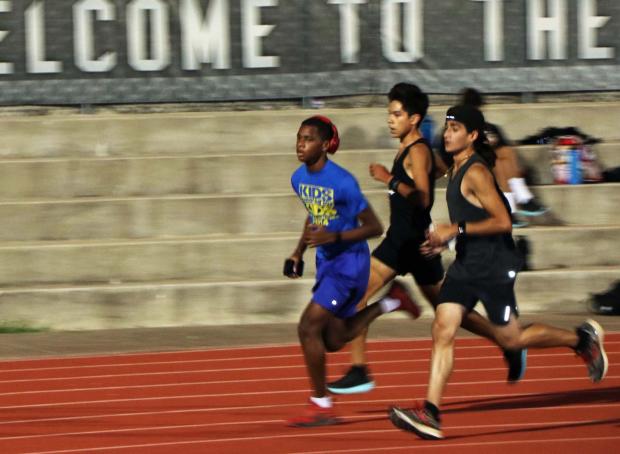 While the first few races of Sanchez's junior season this fall showed a runner that was developing week-in-and-week-out, his performance at Woodbridge all but ensured he catapulted into the elite category.

For two and a half miles, Sanchez was gliding off the steady formation of the country's most talented foursome, a group of four Newbury Park High School boys who would all go on to break 14 minutes in the race.

While some may have seen the Panthers in another league that night, Sanchez never doubted his ability to compete ... well, at least once the race got going.

"My goal was to stay with the Newbury Park guys, but I wasn't entirely confident that I would .. that I could," he said. "I know I was at a pretty good level, but I didn't think I was at the level of the Newbury Park kids.

"Just staying with them in the midsection of that race was pretty cool."

Perhaps that moment was all Sanchez needed.

While in earlier weeks he had achieved some truly remarkable moments, like his first sub-15 minute 5K at the FEAST Patriot Invitational in 14:44:80, and an impressive victory at the Southlake Carroll Invitational in August, none had come close to the feeling of finishing behind a team considered the best in high school cross country.

"The fact that he was at 14:06 and we saw four guys under 14, that's part of cross country history now," Sully said. "There has never been a team like that. People are saying there's never been a cross country team this successful. That's phenomenal. I'm glad he could hang in."

Back at the track, Sanchez finishes his light work and tucks into the seating behind the oval as his teammates arrive, nearly 70 in all. A series of dynamic warm-up drills follow, with Sully readying the troops before a particularly hard set of revolving 1Ks.

As the sun begins to stand and the air thickens, the team shuffles from the stadium on to a grassy patch of land adjacent to the high school. Sully instructs the team on the workout of the day, a rotating pattern of 1Ks and 2Ks with 90 seconds rest.

Sanchez and Co. will roll out with a first rep of 1K at race pace, followed by two more 2Ks at hard efforts before an everything-you-got final 1K.

Sanchez readies at the line and thumbs his watch, anticipating his marching orders. And then he's off, rolling around a corner before stamping down a hill and into that all-to-familiar cadence. 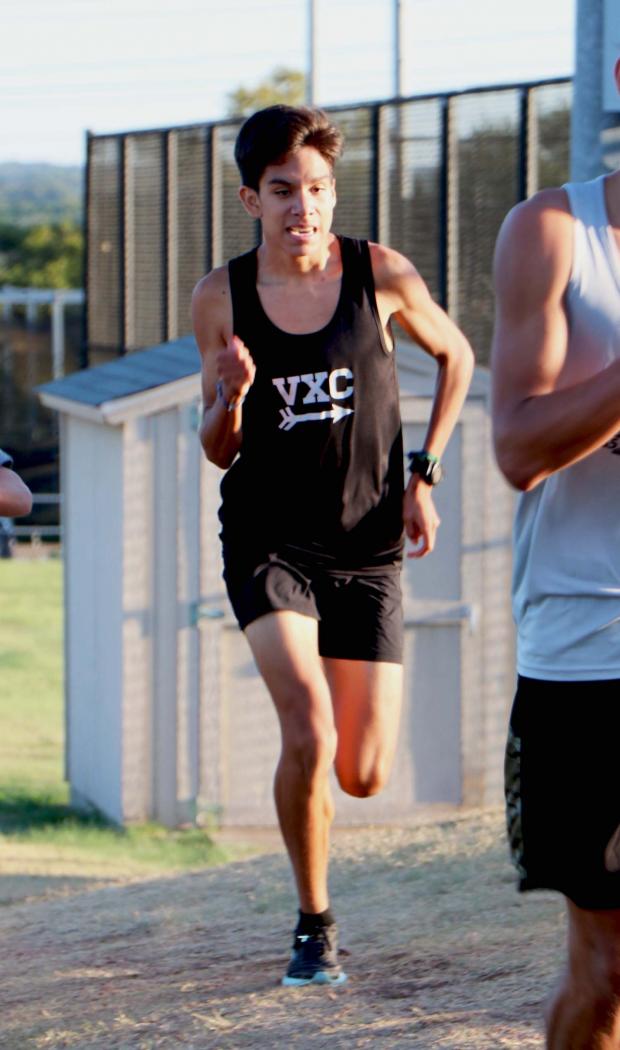 Now would be a good time to tell you, at least from Gary Mathis' point of view, that Sanchez's transformation is less of a remarkable shift than an understood development from an athlete who's been shaping his fitness since 2019.

While Mathis isn't Sanchez's head coach, Sully will readily admit that the pair often work in unison, shoring up any particular gaps in training or otherwise.

Mathis' daughter, Jordan, graduated from Vandegrift in 2020. His young daughter, Taylor, is a senior on the roster. Gary is around training most days. He's also the area's local club coach.

Mathis has worked with Sanchez for a number of years with 620 Running, the club for which the Austin High School program utilizes when it steps outside the high school season.

"He's just getting stronger," Mathis said. "We're seeing it (success) more frequently, so it seems like a steady evolution. To me, it doesn't look like he's doing anything out of the blue."

But almost no one would deny that winning just hits different.

A year ago, Sanchez's only win came in a tri-meet. Elsewhere, he finished fifth at FEAST, fifth at McNeil, second at district, fifth at regions and ninth at state. Perhaps 2020 was the year when Sanchez realized he could compete with anyone.

"It's more of a comparison to be up there and just seeing improvement," Sanchez said of winning.

And yet, finishing top 10 at state last fall was a huge accomplishment, too. He cherishes that moment for a lot of reasons. But one of the biggest?

Sanchez's entire family was there. In fact, it was a group of nearly 20 family members, including his mother Pedra and father Luis. They were cheering him on, wearing t-shirts emblazoned with his silhouette, the words 'Team Sanchez' right out in front.

Sanchez credits his parents' Mexican heritage as to one reason why they're so invested. Neither were runners.

"Mexico is super into sports, more specifically into soccer," he said.

But at the same time, whether it's soccer or running, the Sanchez family is out there.

"They are always out there making a lot of noise," Sanchez said. "That helps me keep running faster because they're supporting me."

So too has running every day.

We've been doing this too many weeks in a row now. I think he has the confidence. He has the swagger where he expects to win every time."

Mathis said Sanchez has done that every day for the last year and that "consistency has changed for him the last couple of years."

There is no science to winning. For most, factors like confidence, determination and an ability to find the right gear in the final moments are the biggest factors toward claiming the top spot in any race.  But it seems Sanchez has found it.

Sully has seen it a few times already, from a few of Sanchez's biggest races during the outdoor season, to his burgeoning success this fall.

"He's got this next-level confidence where, if the pace isn't what he wants, he'll run his pace. He won't stay in the pocket. We saw that at regionals last year.

"That's been paying off for him more often than not now," Sully said later on. "Everything is coming together. Although it's hard to see in XC, because all races and conditions are different, we can see it in practice."

He clocks his first 1K in 3-minutes flat.

"You're here so it's not surprising that he's running these fast," Sully tells me.

By the final moments, Sanchez doesn't even look like he's tired. He jogs for 90 seconds in a circle before he clicks his watch one final time, seemingly looking as if he just began.

He curls around a turn, fires over a downhill and then slaloms around the 1K loop before heaving up a hill and finishing the rep. 2:57.

I ask Sanchez later if he believes time matters, or it's the win itself that drives him.

"When I went through the line (at Woodbridge) and I saw my time, I was like, 'Dang.' I was definitely something I was looking toward," Sanchez said of his U.S. No. 7 performance. "I look toward the times. But it's always about improving myself against others. It's more about racing than the times."

As if on cue three days later, Sanchez finishes in second at the HOKA One One McNeil Invitational in Round Rock, close enough to taste victory but still ways away from the pressing guarantees of victory.

Ultimately, Sanchez knows the final ingredient. And he knows it will come in time.

Culture, Tradition and Legacy: The Hallmarks of Belen Jesuit