* Lane Hoyes (left to right), Ciara O'Shea and Jaydon Cirincione are athletes to watch at the Trinity/Valkyrie Invitational on Saturday in Louisville

One of the Southeast's premier races in September is back for its latest iteration, and it's sure to be an exciting display of the country's top talent.

From state champions in Kentucky to up-and-coming talent in Indiana and top-ranked teams in Ohio, we'll witness some exhilarating racing on Saturday at Tom Sawyer Park in Louisville.

MileSplit will have all the coverage LIVE, including a live stream, post-race interviews, photos and more. Below, we identify five of the event's top athletes and its two best teams.

The defending girls champion at the Trinity/Valkyrie Invitational is back for her latest go-around.

So far in 2021, the Madison Central junior has clocked two performances under 18 minutes and has won four straight races. She's a three-time state champion in the state dating all the way back to her eighth-grade season.

But largely, this is O'Shea's time to shine.

Beyond just her performances in Kentucky, she'll have a chance to showcase herself on a national stage this fall.

Winning the Trinity/Valkyrie for the second straight season won't be her ultimate statement. But it's a nice start, and the beginning of what could be a very fruitful campaign.

Right now, there's a very clear order in Indiana. Three out of the top four fastest athletes in the state are ranked in the MileSplit50, from Angola's Izaiah Steury to Carmel's Kole Mathison to Brebeuf Jesuit's Krishna Thirunavukkarasu. Columbus North's Reese Kilbarger-Stumpf is on the cusp, too.

And then you have the state's fifth-fastest athlete: Spenser Wolf.

He's a perfect 4-0 to start the season, and that includes his most recent performance of 15:08.30 for 5K at the Rick Weinheimer Cross Country Classic, a time that ranks U.S. No. 27 in the country.

A win at the Trinity/Valkyrie Invitational -- one of the premier invites in the Southeastern region -- would represent the biggest statement win of his career. He certainly has a very good opportunity to do so on Saturday. After two races in 2021, Hoyes has come up short in two straight outings.

He's seen second place in both of those races.

His first loss came to Madison Central senior Brady Masters -- who will also feature at the Trinity/Valkyrie Invitational -- on Aug. 21, and then his next came to Kentucky's current fastest athlete, Jimmy Mularkey, a week later.

Hoyes is currently Kentucky's second-fastest athlete, with a PR of 15:23.59 from the Tiger Run. That earned him a 179 speed rating.

But losses are losses. Those outings should be enough motivation for him to want to go out and make a statement.

And he has a big opportunity to on Saturday, as the boys race is wide open. No single athlete has distinguished themselves as the outright favorite.

Hoyes hasn't raced sine August, which means he's likely been training with precision, and with his eyes on his next big opportunity. 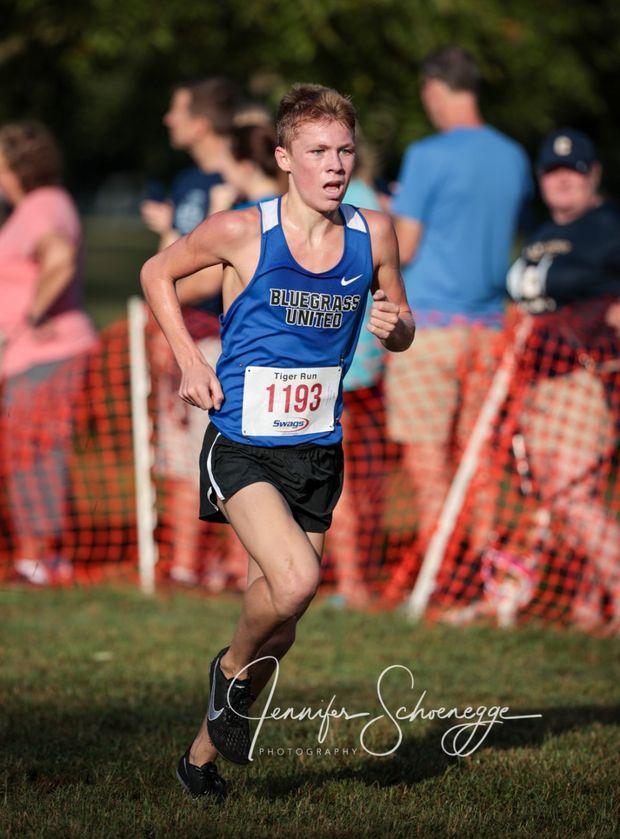 It might take an outrageous effort for Wasson to win ... like a potential all-time freshman type performance.

Currently, the top-ranked first-year athlete in the United States owns a best of 15:28.60 at the Tiger Run -- and that effort was no small order, either.

That performance ranked No. 18 all-time over the national freshman 5K rankings. Can he connect for another brilliant outing on Saturday?

Tom Sawyer Park is a tested course, but many have covered the 5K distance with speed before. If Wasson could break 15:20, he would enter into the top 11 performances all-time in the freshmen database. Graydon Morris owns the top all-time performance of 14:58.68, which he accomplished in 2016.

No other freshman has ever broken 15 minutes for the distance.

If nothing else, Wasson is a watch for the future. So far this fall, she's won two of three races and has slipped under 18 minutes on her last two attempts for 5K, the latter being a very impressive time of 17:49.90 at the Eagle Classic Brown Country Invitational in Nashville, Indiana.

Year-over-year, her performances under 18 minutes are also a massive improvement from her best efforts in 2020, when she dropped a career-best time of 18:20 at regionals ...in October. Her season best is currently the fifth-fastest time in Indiana and No. 46 across the United States.

Circincione's fitness should tell you something.

While O'Shea is the favorite, the Indiana standout has a chance to do something special.

A traditional state power and the top ranked team in the state right now, duPont Manual will be tough to beat on Saturday.

Behind junior Jessica Secor -- who's among the favorites to contend for an individual title -- the squad owns a 19:26.91 team average and a 94-second split.

Speed rating wise, however, this team will certainly need to improve throughout the season. Secor's third-place performance at the Tiger Run -- a time of 18:34.54 -- netted her a speed rating of just 117.

But there's no better place to do it at thanTom Sawyer Park, where Secor ran for a time of 18:46.90 a year ago. That gave her a fourth-place finish.

At one point in 2020, this boys program was ranked as high as No. 4 in the nation on the MileSplit50.

While those highs might be slightly out of reach a year later, there's no doubt this team returned a ton of depth and a vast amount of potential. Five veterans scored among the team's top scorers at the Hot Summer Bash on Sept. 4 at Hilliard Davidson.

And in doing so, the Bombers -- what a nickname, by the way! -- defeated our preseason No. 19 team, Hilliard Davidson, and promptly made a big statement. The squad moves into the Trinity/Valkyrie Invitational as one of the favorites to take the team title.

Of Note: Interestingly enough, Louisville's St. Xavier boys will also be there.

Now, is St. Xavier the best boys team in Ohio? So far, the Bombers rank No. 3 on team 5K average with a 16:16.01, but the team's spread is impressive, at 36 seconds. Fellow contenders like Mason (OH) and St. Ignatius (OH) currently have faster averages.