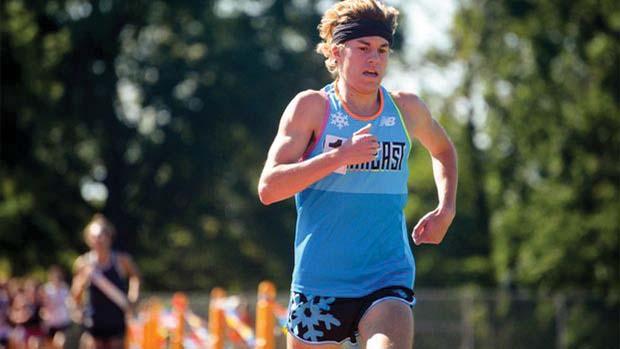 "I always say I want to push my limits. That day, I found them."

You accept the responsibility it requires when you make the initial move. You accept the work that is required to stay out in front. And you accept the contract you make with yourself when you continue to press forward until near collapse.

Sometimes it ends gloriously, with near perfect results and personal record performances.

But other times, you accept the risk. Sometimes you run so hard you find your limits.

"I've always adopted the gung-ho way of racing," Sherry said recently. "I'm a frontrunner. I like to take it out from the front. I don't like sitting and waiting."

Most of the time, Sherry's calculated moves pay off. He won 22 races over the course of the fall cross country and outdoor track and field seasons, with incredible performances at the GSTC High School Fall Showcase, the 12th Rock Northeast Cross Country Club Championships and CIAC State Open Outdoor Championships.

In the latter, he set a jaw-dropping state record in the 1,600m, running a new Connecticut standard of 4:01.88. It was seven seconds faster than anyone in Connecticut history and just five seconds ahead of his in-race competitor, Nicholas Bendtsen, who kept Sherry honest over the first two laps.

It was also the fifth-fastest time at the distance in the United States all-time.

And yet, if you ask Sherry, he won't point to those races as the ones he'll remember most.

Like his 2-mile race in March in Myrtle Beach at the USA Meet of Champions, when he had to crawl to the line after leading for seven laps. Or his third-place finish at Outdoor Nationals in the mile, when he was on pace for sub-4 in the mile before he came back to earth in the final 200 meters.

He could point to his in-state rivalry with Bendsten, who nudged him at the line of the East Coast Championships in December in cross country, after a last-ditch sprint over the final 200 meters.

There's a point to all of this, he says.

It's within these moments of failure where he learned certain truths about the future. What it would take in his training, or in his mileage, or in his workouts, to make that next step.

That performance in March was a perfect example, Sherry said. Lined up against a who's who of the nation's best, Sherry was not-the-least-bit intimidated. Even by the recent successes of Hobbs Kessler, who had just days prior broken the high school indoor national record in the mile.

Finding himself on the far outside of the stagger start, the Conard junior rushed out to the front. He held the lead for seven laps, pushing Kessler and Co. to tense and uncomfortable paces.

But in the last lap, after dragging himself to the very edge, Sherry tipped.

His final 200 meters was 43 seconds, and he fell to the floor with five meters left, ultimately getting passed by a few runners in the process. He crawled over the line.

"I think what it taught me. It more of just showed me where I was exactly at that point," he said. "Jumping into the first real big track race of the season. And it was with the best competition in the nation.

"I want to be the best Gavin that there can possibly be in cross country."

"I think going into that, I just ended up finally tipping the edge. I've always tried to get there. Tried to get to that point of failure. That was sort of my goal. I was happy."

Sherry looks back at that race five months ago and he remembers it as the moment of truth. He was as close as he ever was at being the best at his particular distance. And yet, he came up just a few meters short. He knew there was still room to improve.

"I always say I want to push my limits. That day, I found them. What do you do when you find your limits? You try to extend those limits. You push that wall back further and further. But once you discover it, 'OK, I know where I am now."

Of course, the beauty of that race was that it was in March. It was Sherry's first outdoor performance of the spring. A month later, he won two Connecticut state championships, clocking that state record in the 1,600m and then pinning down in-state rivals Aidan Puffer and Bendtsen in the 3,200m, winning by four and eight seconds, respectively, in 8:59.80.

Importantly, Sherry discovered that in order to hit your limits you must fully buy-into the idea that you leave nothing behind.

In his last race of the season, at Outdoor Nationals in Eugene, Sherry once again pushed his way out front, alongside Reese Kilbarger-Stumpf, before taking over the lead in the third lap.

He came through the bell in 3:02 before feeling the effects of lactate in the fourth-and-final quarter. A dizzying kick from Nathan Green won the race in 4:03. Sherry was third in 4:07.

He may have faltered late, but it was yet another PR.

"I feel like if you don't have a kick you did it right," he said.

Fortunately for Sherry, he has exactly one year, and three seasons left between cross country, indoor and outdoor -- not to mention his commitment to a major NCAA Division I university. His twin brother, Callum, is also right by his side, training every day and offering the kind of motivations that few others have.

With the climate toward racing a bit more open in 2021, cross country will offer more consistent opportunities and potentially bigger races down the line. Sherry has his sights on the same kinds of successes he achieved this past year.

But he won't be alone in his quest, either.

"I think the biggest goal is to win Foot Locker,"  said Sherry, who was 14th in 2019 as a sophomore. "It's every top guys goal. It won't be easy. There's incredible competition. This is one of the strongest classes in awhile. I'm shooting for the top.

"I want to be the best Gavin that there can possibly be in cross country."

This fall, one of his clearest goals is breaking the Wickham Park 5K record of 14:58.00. It was last set by Darien graduate Alex Ostberg in 2014 at the CIAC State Open Championships.

"I would absolutely love to top that record," he said.

Of course, a different Gavin might be needed for that moment.

Experience, data and months of training will likely carry him differently in those pressurized final seconds. A different Gavin will finish that race, as opposed to the one who may have needed more of an edge the first time.

When he gets to those limits again, we might just see a completely different Gavin.

At the same time, he will welcome the challenge, too. Wickham Park has a legendary mid-race hill that begs for mercy.

"You have to crest that," Gavin says, "and you don't get the downhill for awhile. It's brutal. But that's where I like to throw in the biggest surge. It's fun. It's my favorite cross country course by far."