* Katherine Jackson graduated from Prairie View A&M University in May

Katherine Jackson opened up the notes application on her iPhone in May and began typing. That's how her truth began to form.

It wasn't the perfect setting, at least the one she imagined. Years earlier, she had hoped to reveal her life's journey at her high school graduation. Then time passed, and that vision morphed. Maybe after an NCAA Championship. Maybe after a birthday.

Now she had graduated college. Still no one knew.

If she was being honest with herself in this moment, and she certainly was, this was the time. It felt like she could finally let the weight of her world off her shoulders. She started typing until she was finished.

I was not sure at first if I wanted to share my testimony because I was embarrassed and scared but someone out there needs to hear this," she wrote on Twitter. "For almost all of my years in high school I was homeless. I could literally fit all my belongings in a high school locker."

There, she thought. It's out there.

"I thought I would get like six likes and some 'You did it!' comments and that's it," Jackson recounted recently for MileSplit. "I didn't think it would get this far. Then, a couple of minutes later some friends hit me up.

"They said, 'Katherine, I never knew.' Then I hopped back on Twitter and I was like 'Oh my gosh.' I never thought it would get this big." 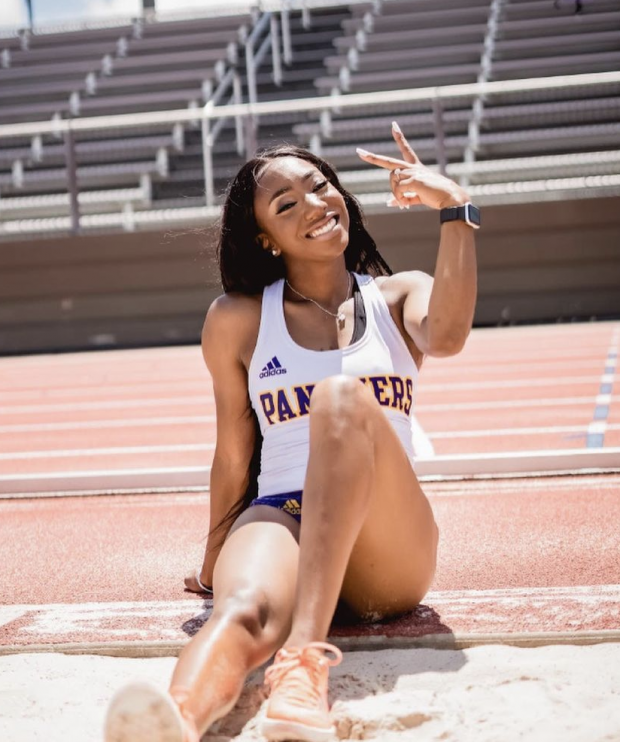 Her message did. To date, Jackson's impromptu and frank conversation about homelessness on Twitter has amassed an incredibly positive response. The post, which took five tweets to finish, received 125,000 likes, 12,900 retweets and over 1,000 replies.

Jackson heard from many people she knew, and then thousands of people she didn't, and even those she could have never imagined would reply. Olympian Tianna Bartoletta was one, Jackson said. Another was a television producer.

"This made my night last night to the point where I went back & re-read this morning," Kenneth Johnson wrote on Twitter. "Never be ashamed of your story b/c it could be someones push. You have great things ahead of you & are just scratching the surface."

Even beyond the response, though, the message is what mattered. And it might matter to someone out there in this track and field community, Jackson said.

It's the reason why we're highlighting this story, too.

Five years later, Jackson remains bright-eyed and hopeful. She graduated from Prairie A&M University in May with a degree in Political Science and a minor in African American studies. She also got married.

In August, she has plans on visiting her husband in South Korea, where he's stationed, and then taking a gap year. Then she'll take the LSAT, apply for law school and set her sights on a new journey. Jackson hopes to join the United States Air Force and one day become a JAG officer.

But through it all, track and field remained a key ingredient in her success: From her childhood up through high school and into college. It kept her focused.

"Track was my saving grace and only escape from the reality I would face after practice, meets and school," she continued to write. "I wanted to give up so many times y'all. I felt like a failure at a young age because I could only contribute so little to help my mom out. My mom would work tirelessly day in and day out 3 jobs to feed us and put gas in the car to keep me going to school."

Sharing that testimony in May, Jackson's message hit a chord as disparities in income and housing costs rage on throughout the United States. The National Alliance to End Homeless reported that in January of 2020 an estimated 55,739 family households, and over 170,000 people within those families, identified as homeless. Another report by the NAEH during a single night in January in 2019 found that more than 500,000 people were homeless across the United States.

Jackson's whole life hasn't been on the streets. Homelessness came in spurts. Her mother, Karrie, always did whatever she could to support her daughter, she said.

Katherine was born in Tacoma, Washington, and lived between Tacoma and Redmond up until her freshman year in high school at University Place Curtis Senior High School. It was in Washington, though, where she unearthed a new passion for track and field. "Coach Nate and Coach Sarah at the time were fantastic track coaches," she said. "They built me up to the jumper I am now."

Jackson even won a Washington state long jump title as a freshman in 2014, landing a mark of 18 feet, 1.5 inches. Her best jump from that season, a mark of 18 feet, 8 inches at the USATF National Junior Olympics, was the eighth-best mark for all freshmen.

A move to California, however, opened up the door for a better future for Karrie and Katherine. Karrie's job with Alaska Airlines transferred her to the Bay Area, and her daughter settled at Angelo Rodriguez High School in Fairfield.

But logistical issues were difficult, and ultimately long-term accommodations couldn't be met. Jackson and her mother moved into the home of a track coach. Sometime later, however, that relationship fizzled and the two were left on the streets.

Katherine began sleeping in her mother's car. And yet, she still went to school and practice. The track became the one place where she could forget about all of her struggles.

"Track has definitely been a lifesaver for me," Jackson told MileSplit. "It got me through the hardest times and the most difficult times of my life. The thing is, I would go to practice. That was my escape. It allowed me to escape my reality. It helped me build upon that.

"When I would go to practice, my main thing was 'Let's stay focused and get technical.'"

As a senior, she hit 20-feet for the first time, posting a wind-assisted US No. 15 mark of 20-1.5 at the Battle of Central Cal Invitational. Her wind-legal best gave her a fourth-place finish at the California State Championships and was the No. 25 best performance in the U.S. that season. By the end of her senior year, the state may have been talking about Agoura's Tara Davis, who broke the indoor high school national record in the long jump -- and on Saturday became an Olympian in the long jump -- but Jackson was one of her state's best, too.

By this point, colleges were recruiting Jackson in droves -- Jackson said there was mail coming in from all the country every week -- though all of her mail was coming to the school. None of the programs or coaches knew she was homeless. There was only one point in high school where Jackson confessed to a close friend just what she was going through, she said.

When Jackson was afforded opportunities to take official visits, and transportation and aide was covered, she took advantage. At first, she was unaware of where Prairie View even was, but once on campus she fell in love.

They offered her a full scholarship.

"I always had an interest in a HBCU," Jackson said. "But I only knew the three main ones: Howard, Spellman, Hampton."

"I instantly fell in love," Jackson said. "It wasn't just athletically, either. It was school based. I could see myself there [at Prairie View] outside of athletics. Being more involved in the campus community and building myself up from there."

Jackson's story almost ended suddenly, though. While it's easy to say that track and field gave Jackson hope, she also had this massive burden she had to deal with every day.

Jackson remembers one particular moment her senior year of high school. It was in some ways innocuous. Her mother drove her to school from the local homeless shelter.

"She dropped me off and I was late. And I just said, 'I can't do this. I wouldn't get out of the car. I told her, 'Just take me back to the shelter or the library. I can't do this.'

"My mom said, 'No, you're going to school.' I said I wasn't. The school guards had to come out and talk to me. They said, 'Are you OK?' And I said, 'No, I am not. Everything in my life is not OK.' I remember thinking I cannot mentally handle going to school, dealing with people and classes and teachers. I just can't."

Jackson eventually saw a social worker who helped her through that anxiety. "She would sit there and let me be quiet," Jackson said. "But it was that moment, and moments I shared with her that allowed me to breath and realize that I just had to keep fighting and pushing. I made it that far. I could finish."

Jackson eventually told two of her closest friends in high school what she was going through. But generally, she said, she never let her guard down.

In college, however, the walls began to fall slowly. She confessed her feelings to two more friends, telling them what her mom had to go through just to get her to college in the first place-- in truth, Jackson had been thinking about what it meant to be in Texas while her mom was back in California.

Jackson's college career was solid at Prairie View. She won a SWAC Outdoor title in the long jump in 2019 with a leap of 19 feet, 8 inches. Her final performance in a Prairie View uniform came in May when she finished fourth in the long jump (19-5.25) and fifth in the triple jump (40-2.25).

There were no NCAA Championship appearances, or titles.

But undoubtedly, no one would argue that was the point, anyway. Jackson's journey from homeless shelters to the NCAA Division I is a story of perseverance and belief.

She made it through by taking it one day at a time.

And importantly, she feels confident enough now to tell others, to perhaps educate those who are in the same position she was in a few years ago.

"Knowing I have support from people who I don't even know," Jackson said, "it just keeps me going. Whatever I want to do. They're there to listen to me, talk to me. And if I need anything, they're there for me. It's been amazing. I never knew I had that much support until I told my story. I was not sure at first if I wanted to share my testimony because I was embarrassed and scared but someone out there needs to hear this. For almost all of my years in high school I was homeless. I could literally fit all my belongings in a high school locker. pic.twitter.com/xcoDLWCIRk

Track was my saving grace and only escape from the reality I would face after practice, meets, and school. I wanted to give up so many times y'all. I felt like a failure at a young age because I could only contribute so little to help my mom out. My mom would work tirelessly day

in and out 3 jobs to feed us and put gas in the car to keep me going to school. When I was being recruited for track I had known nothing about PVAMU but they were the only school that I told my situation too. I was offered a full athletic scholarship and graduated HS while living

in a shelter without my mom. So, if you are out there battling things out of your control please keep going, keep fighting, and don't give up because you never know when your blessing is coming and how much you'll be blessed if you keep pushing.

Thank you PV for accepting me, thank you to those who did not know my situation but would check in on me, and thank you momma for not giving up on me even when I wanted give up on myself. Lastly thank you God for not letting me go and sticking by my side all these years:purple_heart::yellow_heart: