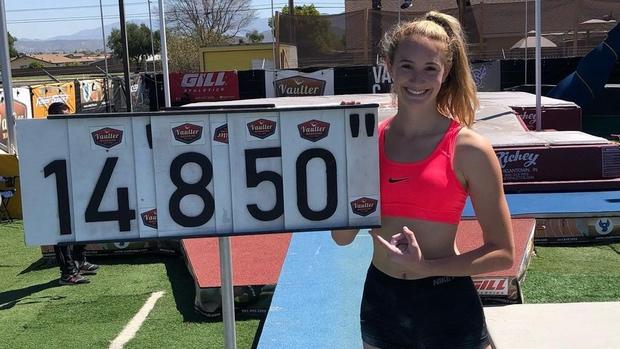 It all clicked for Paige Sommers on Saturday as the Westlake (CA) High School senior captured the outdoor national pole vault record at the Vaulter Magazine Invitational, clearing 14 feet, 8.50 inches.

The performance, which surpassed Leah Pasqualetti's former mark of 14-8.25 from a year ago, set a new career best for Sommers, who previously had earned the California state record of 14-6 in 2020.

Only a half an inch now separates the Duke University recruit from earning the all-time pole vault national record of 14-9, which Chloe Cunliffe reached indoors in 2019.

However, things couldn't have been better for Sommers on Saturday. Her 14-foot mark represented her sixth over that barrier since 2020.

The clearance marked Sommer's third clearance over 14 feet this spring, following marks of 14-3.25 earlier in March and another height of 14-0 just 10 days ago.