*Athing Mu, Micah Williams and Talitha Diggs are a few of the fastest freshmen leading the way as the NCAA Indoor Track and Field Championships approach this weekend

The NCAA Divison I Indoor Track and Field Championships are here, and they go from Thursday through Saturday at the University of Arkansas.

Interestingly enough, there are a handful of first-year athletes who have the potential to be All-Americans -- plus a few more who could also win their first NCAA title this weekend.

Inevitably,  the Class of 2020 will make a huge impact at this meet. Check out the athletes below and how the 2020 class is faring heading into the biggest indoor championship of the season. One of the more exciting races to keep an eye on this weekend will be the head-to-head battle of Texas A&M's Athing Mu and Florida's Talitha Diggs in the 400m.

Mu competed in one 400m race this season in early February. The Aggie and potential Bowerman favorite won the Texas A&M Charlie Thomas Invitational in 50.52, which broke Jessica Beard's school record. In a year, she shaved almost three seconds off of her personal best in this event.

And yet, she might need to go through Diggs, the SEC champion, for the title. Diggs won her conference championships in 51.14 just a couple of weeks ago. The Florida Gator has improved her quarter-mile time every time she stepped foot on the track while remaining undefeated in this event this season.

It could come down to a battle of freshmen.

The Oregon Duck leads the entries by two-hundredths of a second in the men's 60m. Williams is in a great position to bring home his first NCAA title.

The Benson (OR) graduate ran a 6.49 at the Championships at the Peak at the end of February. He has yet to lose a 60m final this season.

Williams and two other freshmen, Shaun Maswanganyi of Houston and Florida States's Don'drea Swint, will be in the field. Maswanganyi -- who is originally from Johannesburg, South Africa -- and Swint have run a 6.58 and 6.63 this year, respectively. 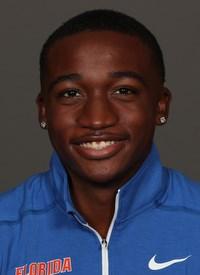 In the men's 400m, it's a pretty stacked field with the top 16 sprinters all running 45-seconds.

Yes, every athlete entered in the 400m is within one second of each other.

Expect a photo finish to determine the NCAA champion.

Two of those athletes are Sean Burrell of LSU and Ryan Willie of Florida. Burrell, a Zachary (LA) graduate, ran one race this season and it happened to be a personal best of 45.57 from the Texas A&M Charlie Thomas Invitational from February. This performance was faster than his 45.74 outdoor personal best.

Willie, the Bullis School (MD) graduate, placed third at the SEC Indoor Championships in the quarter-mile. He ran a personal best of 45.66.

Both of these athletes will need to have an exceptional race and could become All-Americans.

In the one-lap race, Javonte Harding will look to have a podium finish as a freshman.

Harding is the top freshman who is entered in this national-caliber meet.

From North Carolina A&T, Harding ran 20.54 at the Tiger Paw Invite. The Prince George (VA) graduate shaved nearly half a second since the beginning of his season in this event. Arizona State's Marshall is having a banner season, and he seems prime for a top eight finish this weekend.

The St. Mary's Stockton (CA) graduate broke the Arizona State indoor record of 7.59 in the 60mH at the Championships at the Peak in Colorado Springs, Colorado. He's going into NCAAs with the fourth-fastest time and can really challenge the field to win the title as a freshman.

Marshall was the 2019 USATF National Junior Olympic champion in the 110mH and also finished third at the USATF U20 Outdoor Championships that same year.

There are other athletes to watch in their respected event who can shake things up at the NCAA Championship meet. Lucas Bons of BYU ran a 3:55.45 at the Husky Classic. The 2018 Dublin Coffman (OH) graduate showed remarkable strides in his collegiate career by setting personal bests in the 800m, mile, and 3K. Bons enters the meet with the third-fastest time in the country in the mile.

In the women's 60mH, Ackera Nugent of Baylor is the second-fastest hurdler in the nation by two-hundredths of a second. Originally from Kingston, Jamaica, Nugent finished second behind the 2019 NCAA Indoor Champion in the 60mH at the Big 12 Indoor Championships. Nugent was named Women's Outstanding Freshman of the Year for her accomplishments this season. She battled through injuries during the middle of the year but will be look to have a big meet this weekend. Nugent set the U18 world record in the 100mH with a 12.89 at the Youngster Goldsmith Classic in 2019.

In the pentathlon, Kristine Blazevica of Texas has international experience that can be used to her advantage at NCAA championships in the pentathlon. She's currently entered third in the event with 4,213 points. Originally from Riga, Latvia, Blazevica won the U20 National Championships last year. She holds the U-18 national record in the heptathlon (5,629). Her mother, Jelena Blazevica, placed seventh at the 1996 Olympic Games in Atlanta.