Midland Christian (TX) High School senior Caden Norris has continued to work hard this track season despite the closure of facilities and the cancellation of his final season.

Last weekend, all of his hard work paid off.

Not only was Norris able to run an 800m PR of 1:54.98 in a time trial on May 2, but he also met former Midland Senior High School star, two-time NCAA champion and World Championship fourth-place finisher Bryce Hoppel in the process.

"It was cool [to meet Hoppel]. It shows you that even being from a town like Midland (TX) that this guy is on an [World Championship] stage where everyone knows him," Norris said. "It was cool seeing everything he's accomplished and to just pick his brain on everything he's gone through."

Living in Texas, Norris was able to get an early-season meet under his belt before everything was canceled. He ran a 1:56.71 at the Big Spring Invitational in early March, which was a big improvement from his 1:59.56 PR, a time he ran at the 2019 TAPPS State Championship to place third.

"It was good to be back with the adrenaline and then come out and run a two-second PR. I had high hopes going into the season," Norris said. "Coming out after only one week of track practice and running, it just gave me so much motivation to keep working."

But then the news came that the season was canceled. Like many seniors across the country, it was hard for him to wrap his head around that fact initially.

"It was heartbreaking," said Norris. "I've been looking forward to this season since freshman year. I had all my goals for my high school career set for senior year, even in cross country and basketball. There was a lot of tears; it was sad, and then it was just a lot of chaos just trying to find out different ways I can still run and race." 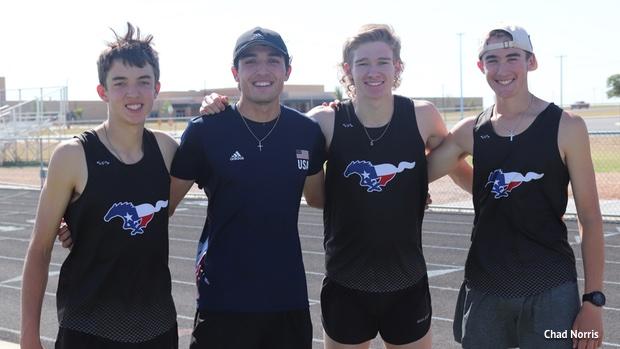 Trying to beat his school's 800m record of 1:55.6 was something Norris had been building to even before his season was hanging in the balance.

Over the course of April, he submitted three different times for the MileSplit Virtual Classic, each one an improvement on his early-season 800m mark of 1:56.71.

"It was tough having no adrenaline and no competition, running an 800m it definitely built my mental strength to just keep pushing through," Norris said.

In his most recent time trial on May 2, the day that was supposed to be the TAPPS State meet, Norris got some help from Hoppel to finally run his 1:54.98.

"I ran a 52.62 the first lap, then Bryce started pacing me and he was kicking my butt," he said. "But I definitely wouldn't have gotten the school record and PR without Bryce."

Norris is going to continue to try and put in the work over the rest of the spring to run a 1:53.

His season-ending goals? He wants to walk-on at Texas A&M in the fall.