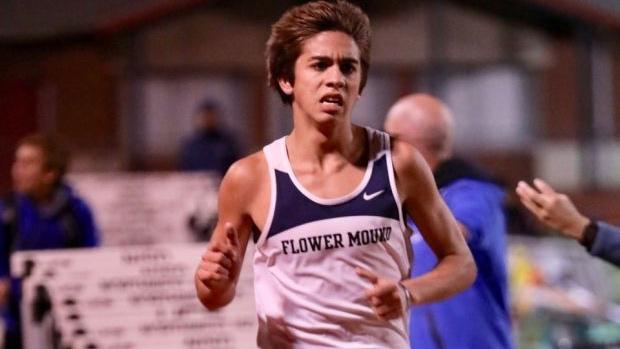 Championship races can, quite literally, get wild.

That was no secret before the weekend, but it certainly was emphasized following the boys championship race at the Nike South Regional at The Woodlands on Saturday.

From top to bottom within the automatic qualifiers, little went according to script.

There was Flower Mound (TX) High school junior Jarrett Kirk, who struggled at his Class 6A state championships race--he finished seventh after winning as a sophomore--in Texas on Nov. 3, but who managed to put it together and win his first NXR South title in 15:41.25.

There was Austin Vandergrift (TX) junior Anthony Monte, on the margins of Texas' best all season before a disappointing run in the Class 6A state championship race (19th). He ran nearly flawless at NXR South, finishing third in 15:44.05.

There was Edwin Gomez, the sophomore from (El Paso) San Elizario and runner-up in Texas' Class 4A Championships who quite possibly was the biggest surprise, finishing fifth overall in in 15:45.38.

Runners who ran up to expectations included Fayetteville (AR) senior Camren Fischer, who was second overall in 15:43.45, and Fort Worth Christian (TX) senior Carter Cheeseman, the race's fourth-place finisher in 15:44.88.

But we knew what those two brought to the table--they both qualified for NXN and Foot Locker Nationals last year.

When the race came down to a kick, some were left on the outside looking in.

Only four seconds separated the race's first finisher to its sixth, and that ultimately left Austin LBJ's Yaseen Abdalla outside the final qualifying bid to NXN--though he  ran well in 15:45.65.

On the team front was another banner performance from Texas' best boys team.

The experienced squad from El Paso Eastwood, who were third last year and did not advance to NXN from the wildcard position, made sure that snub didn't happen again.

Experience should have made the difference.

In the weeks prior to winning its 2018 Class 5A Championship in Texas on November 3, Eastwood was fifth at the Woodbridge Cross Country Classic (CA) and first at Nike Desert Twilight (AZ).

On Saturday, the boys from El Paso pocketed an impressive 122-point performance, which gave them a 16-point cushion from second-place Southlake Carroll and third-place Flower Mound (142).

While no runner from Eastwood finished within the top 25 places, the squad's five scorers were separated at the finish line by just 12 seconds.

The more curious question from here remains what the NXN committee will do with Flower Mound.

Maier, an Oklahoma State commit who won his first Class 6A title this year, is a two-time top 15 finisher at NXN who likely had a bad race.

Will the team be chosen as a wildcard, or will Maier?

Old Hat For Culbreath As She Nabs Third Title

And the McKinney South (TX) High School junior lived up to pre-meet expectations, turning the gears in the final mile to take her third straight victory in 17:39.30.

Plano Senior's Ashlyn Hillyard was five seconds behind in 17:44.78, securing her second straight NXN bid, while Montgomery's Allison Wilson did the same in third-place.

Landing a dominant team win was Flower Mound, which scored 87 points. Prosper was second with 104 points.