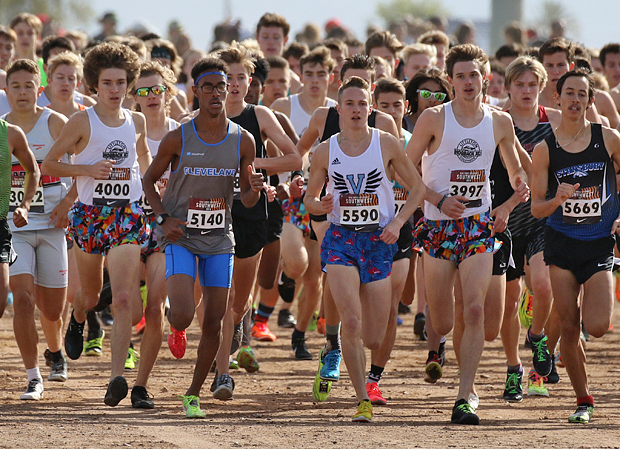 For much of the season, there was a sense in the NXR Southwest Region that American Fork (UT) High School was back to its old self.

Over the history of Nike Cross Nationals' Southwest qualifiers (Note: High School cross country teams run as clubs over the national period and not through their high school kits), the Cavemen had generally been the program to beat, scoring regional victories in six straight seasons stretching from 2009 to 20014 and then another in 2016.

No. 4 ranked American Fork entered the NXR Southwest Region as one of the frontrunners, and there was a feeling that this could be the Cavemen of old.

But then came another spoiler: No. 8 Littleton Dakota Ridge rolled through the Grande Sports Academy course in Casa Grande,  Arizona, on Saturday.

As it has been in recent years--when Highlands Ranch Mountain Vista logged wins in 2015 and 2017--a team other than American Fork won the Southwest Region, and for the third time in four seasons a Colorado team claimed the top spot.

Dakota Ridge, fresh off a Class 5A title in Colorado, was the best team on the day and logged a winning total of 107 points. The program put two runners in the top five and all five of its scorers in the first 71 places.

But all wasn't lost.

There was one redeeming quality to the performance, as the Cavemen finished second overall with 122 points and grabbed an automatic qualifier to NXN. American Fork positioned three runners in the top 16 overall.

Mountain Vista, running with No. 1 stick Easton Allred for the first time over the varsity season, grabbed the No. 3 pole with 139 points, while Davis (UT) was fourth with 212.

It leaves a curious at-large question for the Southwest, where Mountain Vista was granted the benefit of Allred after the junior was ruled ineligible over the season due to transfer rules in Colorado. The team's resume included a second-place state finish in 5A, a runner-up finish at the Dave Sander Invitational and a win at Liberty Bell.

It will be interesting to see if the NXN committee considers the Golden Eagles, who finished third at NXN last year, as an at-large.

In the individual race, two of Colorado's best exploded for a duel for the season, with each putting on, and responding, to multiple moves.

Meanwhile, as Austin Vancil and Connor Ohlson led Dakota Ridge to a team victory, their positions opened up automatic bids for runners below them.

Next up was Riverton (UT) High School's Joey Nokes and Niwot's (CO) Ares Reading, who were fifth and sixth, respectively.

And then it gets interesting.

If Allred's squad gets picked to represent the Southwest at NXN, then fortune will have struck Dylan Schubert in a very good way. While the Loveland Thompson Valley junior finished 10th overall, he was positioned behind two American Fork runners (Luke Grundvig and Carson Clinger) and could end up being the last auto qualifier out of the region.

One notable omission on the boys side was Springville High School senior Grant Gardner, without question the most talented Utah runner in 2018.

The two-time NXN finisher ultimately had to make a hard decision on the race due to the flu and ruled himself out. 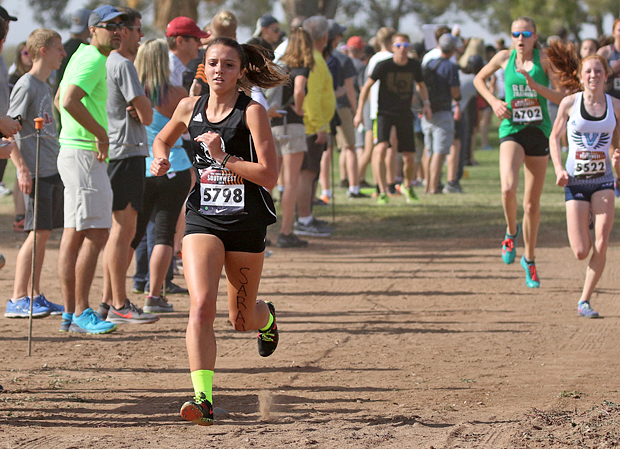 A Race To The Line In Girls Field

Seven individual runners were all in the mix until the very end in the girls championship, but the mad dash to the line sealed up fates for three runners who were separated by mere hundredths of a second.

But let's start first with the winner.

Rio Rico (AZ) High School senior Samantha Schadler had her best performance to date at the Southwest Regional and produced what could go down as her career moment in cross country, winning with a personal record time of 17:06.15 for 5K.

Then it was another stunner, junior Hana Hall of Flagstaff High School, the daughter and protege of marathoner Sara Hall, who was second overall in 17:14.80.


Also-- Hana's whole team ran in a shirt that says "Berchi", Amharic for "be strong" . So touched pic.twitter.com/xHxlEo3i4i

Chaparral's Abi Archer was third in 17:15.30, Mountain View's Helena Miyazawa was fourth in 17:15.30 and Peak to Peak Charter (CO) senior Quinn McConnell was fifth in 17:15.57, logging her second bid to NXN in three seasons after finishing as an All-American at the championship in 2016.

Just missing out a bid to NXN was Colorado Class 3A champion Kaylee Thompson, of The Classical Academy (CO), who was sixth overall in 17:18.33.

In the team race, No. 5 Mountain Vista pocketed its second straight championship with a winning effort of 88 points, but the Golden Eagles needed a little bit of help up top.

With the squad's No. 1 Jenna Fitzsimmons falling to 22nd, junior Sarah O'Sullivan stepped up to lead the team to an eighth-place finish individually.

But Mountain Vista's depth ultimately was one of its biggest strengths.

What was more telling was the race behind the winner.

That ultimately came down to a heavyweight showdown between Colorado Class 4A champion Niwot and returning qualifier Battle Mountain.

And this time around, experience played a big difference.

Battle Mountain scooped up its second automatic bid in as many years, out scoring Niwot by just five points with 135 points.

Niwot, who's ranked No. 15 in the country, will be in a position to be considered for an at-large bid.