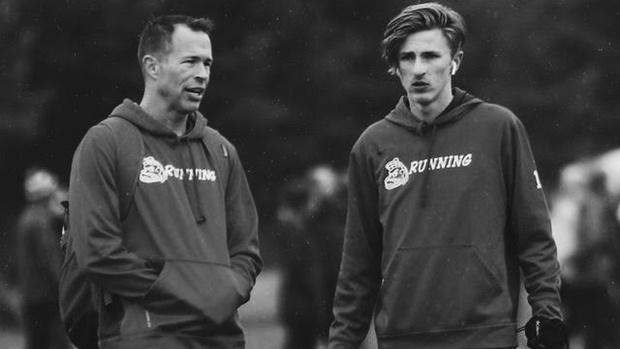 Drew Bosley's final cross country performance in a Homestead High School jersey on October 27th was the kind of race he would remember for a lifetime.

Sure, the 18-year-old Northern Arizona University commit won his second straight Division I state title in Wisconsin. He ran his fastest time on the Ridges Golf Course in Wisconsin Rapids, going out in 4:46 and then pulling along a field that followed his every move. He had whispered to himself in that final stretch, "The hardest mile of your life, Drew," and then doubled down for one final kick, pumping his fists one more time, readying to cross that line one last time.

The emotion was palpable.

But it wasn't everything. Cross country had been about much more than winning for some time before state. The Wisconsin native, arguably the top boys runner in the country, lived and breathed this sport. He loved its community, the kinship, the wide network of teammates and competitors, the grittiness of racing, the fleeting and emotional toil of a challenge, the fastidiousness of running's unseen hours. All these things help drive him forward, taught him important lessons, kept him motivated to improve.

But if Bosley was being honest, what cross country represented most in his life was family.

His father, Andy, had been a high school coach at Homestead for as long as he could remember. His mother, Laura, had taken him to his first cross country race when he was 2 in Kenosha. He had walked past his family's kitchen table for years, glancing at those All-American trophies dad earned at the University of Wisconsin and mom at Wisconsin-Parkside.

By the time he stepped into the hallways of his father's alma mater, he saw Andy's Gatorade Athlete of the Year banner from the track and field season in 1992, his school records in the 1600m, the 3200m and the 5K. All this history was staring at him right in the face.

It was easy to see his future.

"I would not be the runner I am without him," Drew said of his father. "I give him all the credit he deserves."

So the state championships were one giant reminder of what this sport represented in his life.

This was everything to him.

And he surely didn't want to take the experience lightly.

"It was an emotional day, but it was a gratifying day," said Bosley, who posted the third fastest effort all-time on the course, finishing in 15:20.10, roughly 53 seconds faster than his freshman debut. "Just being there and soaking it in for the last time. After the race, I did a 5- or 6-mile cool down around the course and I was getting choked up. I thought to myself, 'I had an opportunity to race there since I was a freshman. This is the last time I would do it.' So yeah, it was really special."

It Runs In The Family

The first time Drew broke one of his father's records in 2016, he qualified for Nike Cross Nationals.

He entered the Nike Heartland Regional that year with an outside chance of reaching NXN, but as a sophomore the expectations were lower. Qualifying wasn't the only objective.

But then the race happened, and there Drew was, in the mix on that track-like surface in Sioux Falls, South Dakota, and there he was finishing sixth overall with a PR of 15:00.60. He grabbed a new school record by approximately three seconds, overtaking his father's mark, and earned a national qualifier in the process, by less than a second over his next closest competitor.

He says there's a very good reason for that.

Andy instilled that idea in Drew years ago while he was searching for success beyond the parameters of Wisconsin. These were kitchen or living room talks, the kinds of conversations that spanned hours and often came back to a central theme: How do I improve?

"Most runners, if you ask them, 'Do you think you can improve your race performance by 1-percent if you ate better or warmed up better or slept better or had a better race plan?' they would say yes," Andy said. "But for the times Drew was running, that (margin has always been lower). For him, that's the difference between making it to the meets and not making the meets."

Dad ultimately wanted son to understand the meaning of accountability.

But it wouldn't have been possible without acceptance from both parties, and a willingness to work together.

History has shown that there can be as many misses in the coaching of sons as there are makes, but that's never been the case with the Bosley's. Instead, this relationship has grown immensely over the time they've shared together.

Like in running, it's been a steady progression upward.

"I didn't know how experienced or how good of a coach he was until I was working under him for a few years," Drew said. "But right when I got to freshman year, I felt like I could talk to him about more things, just because I was more vulnerable in my running.

Days of hard training and guidance brought new insight and understanding into each other's lives.

Drew's success spurred national-level success. He finished seventh at Nike Cross Nationals and Foot Locker Nationals. He broke 9 minutes in the 3200m in both a prestigious race in California and at his state championships --"Two completely different races," Drew said.

As these things go, Bosley now has a chance to potentially eye up times in the 1-mile and 3200m that only prep greats before him have done. He'll be invited to more national-level races.

Read: Can I Set My Mile PR By Driving My Car Home -- Drew Bosley

And while Drew may accept that he has the passion and work rate of his father, both will admit he takes a lot of traits from his mom.

In other words, he's goofy, gregarious, a real talker. Just like Laura.

"I'm probably more high strung and strict," Andy said. "But I think Drew and Owen and my wife are incredibly goofy, and they get some very good personality traits from my wife. If you were in the house to see this, you would probably just see that I'm tired a lot. I just want to go to bed."

Drew has something to add, though.

"I'm very playful and have a cheery side," Drew said. "A lot of people say the only serious bone in my body is running, but that's not the case. I have a serious side. I focus a lot and I take school and my friends seriously. That's how my dad is, too."

And while Laura may be the fun parent, let's not forget her talent, either.

She was a star in her own right in high school before going on to become an All-American at Wisconsin-Parkside. Drew thinks she could have placed in the top 20 at state, too. ...in 2018.

"We had a girl in my high school who finished 17th," Drew said. "And my mom is her training partner. So I told her, 'That's right where you finished in high school. You haven't had any drop off.'"

So maybe it is all in the family. 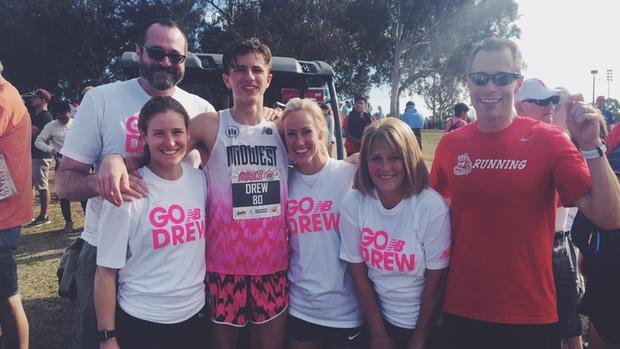 The state championships were important for another reason, too.

It signaled the beginning of another season for Bosley.

There's no denying the aspirations the Homestead High School senior has for his final cross country season. His internal drive has often been the dictator of his own success.

"He always seems to get to that next level," Laura said, "which is fun to watch as a coach and parent."

After his two top 10 finishes at nationals last year, Bosley has been studying and preparing and training for those moments to arrive again on his calendar. He's been employing the 1-percent rule. He says he's trained, ate, stretched and slept better.

"Our focus, when we were doing our tempo or progression runs is, 'Remember why we're doing this,'" Andy said. "Our goal this year, with maybe a mile to go, is to be in contact with those guys in the front. And then after that, it depends on the day. I think 10 guys could win that race on one day, and if you ran it on another day, you could have 10 different winners and 10 different outcomes. But that's been our goal this year. To try and be someone who can run with the top five or six guys and run with them."

To get there would be the culmination of so much work. There was heavy training in August following his USA Junior Championships win in the 5K -- another huge breakthrough -- though that was no mistake. It came by virtue of some major planning.

"My dad was smart with the training," Drew said. "That was one of the reasons why we hit the summer so hard. We didn't over do it by any means, but we hit the summer hard because once September hit, I knew I had school, I had races, I had visits I was going to do. I didn't want consistency to be an issue."

Because there were the recruiting trips, the back-to-back-to-back visits to Michigan, Northern Arizona and Wisconsin, before taking off a week and flying out to Colorado.

In Flagstaff, Bosley said he felt a connection to the Lumberjacks. He ran a fartlek out on the mountain, then added a 14-mile long run the next day. His lungs were pulling, but he came back inspired.

It's where his heart was at.

By late September, Bosley said he hit a turning point. At the Midwest Invitational in Janesville, he revved up for a career best 14:51.60 against two of the state's top runners, Rowen Ellenberg and Matthew Meinke.

He wrote of his decision:

"At NAU I found a group of men working together in an attempt to exceed their wildest individual and team goals. I am thankful to be able to join this group. I know running isn't the most important thing in life, but it's my favorite thing in life, so the thought of spending a few years in Flagstaff chasing dreams with some Lumberjacks in short shorts makes me smile."

And now the only thing left are his goals, the sum of which could yield his biggest success yet.

Believing In The Mission 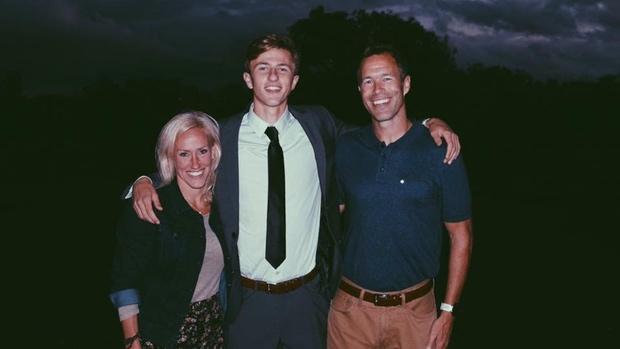 Ultimately, whether Drew contends for a national championship or not, the process is what's led him here.

And so has his family.

It's something he doesn't take for granted. Because this sport has done so much and been a staple in his life. It remains such a positive light to those around him, and it's a past time that each member of his family can explore in various ways together -- including his brother, Owen, who's entering high school next year and hopes to break some of his brother's records at Homestead.

"Running has been something that intangibly has always kept us together and keeps the bonds strong, because it's something this family loves," Bosley said.

Here's another thing Drew is willing to admit. Another reason why the state championships were so important on Oct. 27?

It was his dad's birthday.

After giving his father a big hug in the finishing line tent, Drew asked a question.

"Do I have to get you a present now?"