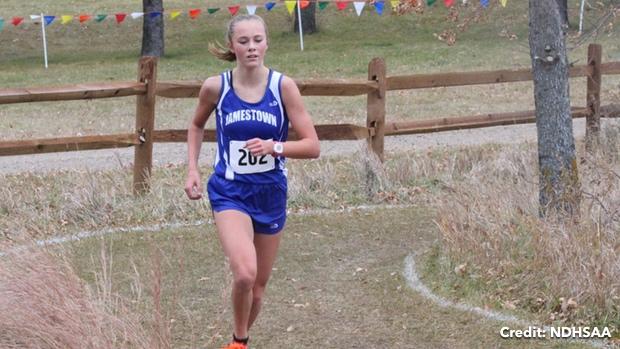 This weekend played host to a wide range of state title races across the country, so we'll do our best catching you up on the national-level storylines from each meet.

Check below for notes on storylines from each meet.

1. Ripley High School junior Tori Starcher had a scare in the Class AAA race in West Virginia, claiming a DNF. According to the Parkersburg (WV) News and Sentinel, the large school girls race was the last of the day at the Cabell Midland Course and conditions were messy. Starcher was the defending champion in the race, but no reason was reported for her dropout, or to the condition of her following the meet. Results from West Virginia's state championships can be found here.

2. Homestead senior and MileSplit50 No. 1 Drew Bosley claimed his second straight Wisconsin Division I title on Saturday, claiming a win in 15:20.10. That marked a personal best on the Ridges Golf Course in Wisconsin Rapids for Bosley, who was runner-up as a sophomore and seventh as a freshman. The effort is now No. 3 all-time at the state championships. Wisconsin state cross country results can be found here.

3. Bosley was the favorite in Wisconsin, though his next closest challengers were Kimberly's Rowen Ellenberg, who was second in 15:30.90, and Neenah's Matthew Meinke, who was third in 15:33.90. And while Meinke didn't get the individual title he likely was hoping for, there was a saving grace. The senior's Neenah squad upended Middleton in the Division I race by 11 points, scoring 120 to Middleton's 131. While Neenah scraped by with its fifth man, it's top four gave it's final scorer enough cushion and put together four scorers in the top 20.

4. In the Division I girls race in Wisconsin, Muskego came away with the kind of performance that at least has to raise your eyebrows if the team chooses to compete at NXR Heartland. The squad scored 48 points, blitzing past second-place Sun Prairie (103) with a 51-second spread and 18:56 average.

5. Indiana has one of the toughest qualifying processes of any state in the country, so for athletes who reached states, it was a success on its own. But the La Vern Gibson Course in Terra Haute is no joke, either. On the boys side, MileSplit50 No. 6 Cole Hocker almost completed the perfect day. The Indianapolis Cathedral senior took the overall title in 15:25.10--his first--while his team was just 10 points behind Carmel's boys, which scored a winning mark of 136 points. On the girls side, it was another win for Greencastle's Emma Wilson, who scored her second straight state title in a time of 17:53.90. It was her eighth straight win of 2018. Fort Wayne Carroll, meanwhile, dispatched a host of very good Indiana squads en route to a title with 85 points. Full results for Indiana's state championships can be found here.
6. In Idaho, Mountain View junior Lexy Halladay executed for her third straight championship in Class 5A, winning with an overall PR of 17:08.73 at Eagle Island State Park. But it was Boise Senior's girls who continued to capitalize off their magnificent season with a dominant state title. Boise Senior scored 39 points, surging past Eagle (64) and Mountain View (69) behind three scorers in the top seven. The Braves averaged 18:02 and covered a 69-second spread. With NXR Northwest nearing, Boise Senior is firing on all cylinders.

7. Meanwhile, in the Class 5A boys race, Borah sophomore Nathan Green pocketed his first state title with a career best of 15:10.07. Green was third at Bob Firman, and had won a very competitive Jimmy Driscoll Invitational to open the season. In the Class 4A race, Bishop Kelly's Nick Russell fought off Zachary Erickson to win his third straight title in Idaho in 15:11.25. Russell is looking to re-qualify for NXN, where he finished 16th in 2017. You can find Idaho results here.

8. If nothing else, this was an electric finish in the Class 6A boys race in Oklahoma. Mustang sophomore Gabe Simonsen outkicked Deer Creek's Steven Clark by seven-tenths of a second to win in 16:22.20. See video below. Results can be found here.

9. In Kansas, the boys of Olathe North proved their second-place performance at Roy Griak was no fluke. The squad claimed the Class 6A boys race at the Rim Rock Farm Course in Lawrence, Kansas, with a winning mark of 51 points, tallying a 38-second spread and 16:27 average. And, just for a notation, fresh off her Dear Running Letter, Kate Cox and her St. Thomas Aquinas girls won the Class 5A race by 11 points over Bishop Carroll. Talk about motivation. Read her letter here. Find all of Kansas' state results here.

10. In North Dakota, Jamestown sophomore Meghan Ford broke 18 minutes for the second time this season to claim her first title in 17:56.90 on the Bjornson Golf Course in Valley City. Results can be found here.