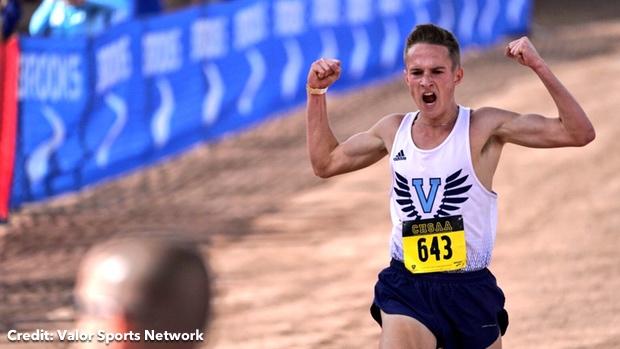 Colorado's state cross country championships went down in Colorado Springs on Saturday, and from a national standpoint much of what we believed would happen did.

There's few secrets in the Centennial State, so let's get into the national storylines.

1. Valor Christian (CO) High School junior Cole Sprout had been producing dazzling runs all seasons, and his state championship performance fit into that familiar theme. The potential national title contender and MileSplit50 No. 4 runner authored a course record at the Norris-Penrose Event Center course, securing a time of 15:16.1, which boiled down to a 4:55 pace. That time represented a 26-second improvement from his time last season, though Sprout's squad moved up from 4A to 5A in 2018. It also shattered the previous course reocrd of 15:33.70, which last was set by Lyons (CO) graduate Paul Roberts back in 2015 -- ironically, Roberts won a Mountain West Conference title for Wyoming on Friday. Sprout currently owns the fastest 5K in the country.

2. Beyond Sprout's amazing course record, MileSplit50 No. 6 Dakota Ridge (CO) pounded Mountain Vista with a 29-point win in the Class 5A boys race. Even if the Golden Eagles had Easton Allred in the lineup, they still would have lost--Allred is ineligible this season after the CHSAA ruled his transfer from Rock Canyon was athletically motivated. Dakota Ridge put four runners in the top 10 (team scoring wise), while Mountain Vista struggled in the back of its lineup to displace the field. At best, Allred's inclusion would have yielded the Golden Eagles 57 points. Dakota Ridge remains a real threat to earn an auto NXN bid at NXR Southwest.

Cole Sprout storms to a new 5A course record, and Dakota Ridge puts three into the top 10 to claim the team title

3. The MileSplit50 No. 2 Mountain Vista girls were all business, landing a 44-point victory over Cherry Creek in the Class 5A girls race. The Golden Eagles' first four scored within the top 10 in team scores and senior Makenna Anderson rounded home as their fifth-scorer, tallying the final 18-points. The bigger question still lies, though. While the Golden Eagles have rolled through the season--and will likely continue to do so at the NXR Southwest Region--a national title will be a much, much harder get. The team still has questions with depth and will need to shore up its entire lineup heading into a national race.

4. The best dual of the championships, in terms of a national-level storyline, came in the Class 4A girls race. Two top 25 teams went at it, and No. 18 Niwot came out the victor, landing a 47-59 point score to beat a hard-charging No. 25 Battle Mountain. Niwot had all five of its runners at 19:31.0 or faster, as did Battle Mountain, but the Cougars landed a dagger when it went 1-2 with senior Layla Roebke (18:29.3) and sophomore Taylor James (18:35.4). Otherwise, this battle was as even as you could imagine. Battle Mountain had the closer spread (50 seconds to 61 seconds), but the squad was down 8-points after its first three runners. Niwot displaced Battle Mountain again with its fourth, and as a final blow, with its fifth, too.

5. The Class 4A boys race saw Niwot's top two runners, junior Cruz Culpepper and senior Ares Reading, go 1-2, but it was the Centaurus boys, who were on the MileSplit50 bubble, that put together a 50-second spread and a 16:40.4 average to confidently come away with a 36-point win over Palmer Ridge.

6. The biggest upset of the state championships came in the Class 3A girls race. While Peak to Peak Charter had been on the national cusp for much of the season, the squad were downright pummeled by The Classical Academy on Saturday. The high school from Colorado Springs had all five of its scorers under 20 minutes and its first four all faster than 19:15.00 to score 34 points. The squad scored 20 points through its first four, essentially silencing Peak To Peak after seniors Anna Shults and Quinn McConnell struggled on the Norris Penrose Events Center course. Peak To Peak was 63 points back to finish second.

FLIP THR SCRIPT! Kaylee Thompson leads The Classical Academy in a major upset victory in 3A. Thompson toon the win, and lead three more TCA runners into the top 10