Success keeps rolling in for Grace Stark, only this time it's on an international stage.

The White Lake Lakeland (MI) High School senior won a gold medal for Team USA at the Youth Olympics on Sunday in Buenos Aires, Argentina, winning the 100 meter hurdles in a wind-aided career best of 12.83 seconds (+2.8), improving upon her first round performance of 13.31.

The time itself would have been the fastest outright time last year and ties the all-time No. 1 all conditions mark of 12.83 (+3.7), which Agoura (CA) graduate Tara Davis scored at the CIF Championships in 2017.

Stark's winning time came in the 30-inch hurdles, which are standard for U18 athletes at the IAAF level. The implements, however, are lower than the NFHS required 33-inch hurdles, where Stark scored a best of 13.16 in June at the Michigan LP Division I Championships.

Halfway to a gold medal at the Youth Olympics, @GraceStark18 comments on the cold, blustery weather in Argentina:

This marks Starks' biggest win and her first victory on the international stage. The Class of 2019 recruit won a national title in the 100mH at New Balance Nationals Outdoor in June and was third in the 100m. She swept both state title races in Michigan.

The performance was Mu's second fastest effort of her career for the distance.

Final performances remain from St. Mary's College (CA) junior Malcolm Clemons in the long jump on Monday and from Mifflin County senior Skylar Ciccolini in the girls javelin on Tuesday. 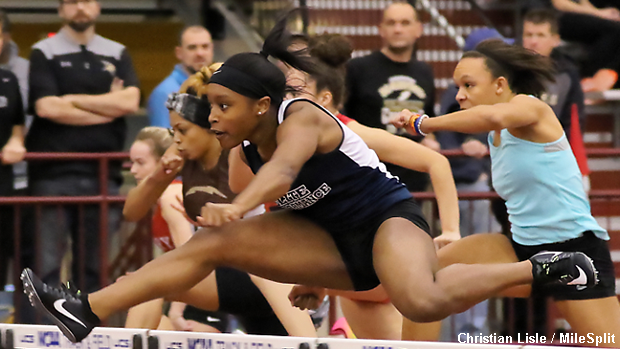