Every year at the AAU Junior Olympic Games, Charles Oliver sees something new, and it's often a reflection of where the sport of youth track and field is going.

This year in Des Moines, Iowa, for instance, the National Chair of AAU welcomed athletes from two states the Games has never had, and a few more from Puerto Rico.

"We're really excited about the growth of AAU, but what's more important is that we're expanding to new territories," Oliver said. "This year we had athletes from Alaska and Hawaii and to me that means our brand is expanding."

Ultimately, that encourages Oliver in the progress of the sport at every level. The Games featured a total of 10,040 athletes and 777 teams at Drake University, the largest its ever had at the site. There were approximately 230 officials and volunteers represented by 28 states, plus Jamaica and St. Thomas. There were also eight Olympians in Iowa during the Games.

While states like Texas and Florida represented as they do every year, bringing thousands of athletes to compete throughout the week, the top club at the Games was the Blue Track Club of Greater St. Louis (MO), which had 135 athletes.

It wouldn't have been possible without flawless execution.

"We had awesome weather, and that's something we can't control," Oliver said, "but we try to maximize what we can. I tell my staff, my philosophy in event management is, 'You don't let it happen. You make it happen. Because if you let it happen then you're chasing things all week trying to make it right. But if you make it happen, everything is structured.'"

Of course, the AAU Junior Olympics is also a platform for young athletes to succeed on the track, and 2018 was no exception to that. There were 17 national records broken over eight days.

The competition saw the career close of one of AAU's top athletes over the past five years, Tyrese Cooper of Miami Gardens Xpress, who finished his prep career with three championships in the boys 17-18 division of the 100m, 200m and 400m.

He was awarded the Joel Ferrell Award as the most outstanding boys performer of the event, along with Trenton Track Club's Athing Mu, who won the girls 15-16 division of the 400m, 800m, 1500m and placed second in the 200m.

Along with both performers, there were countless athletes who set career bests. The Games saw 34 double winners and eight triple winners, including 8-year-old Kharisma Watkins, who said afterward that Oliver inspired her to keep improving.

Other countries are even taking notice of the AAU's ability to connect with young athletes. A delegation from Canada met with Oliver on Saturday and watched the meet from afar. Oliver said that fact encourages him that youth track and field has an international impact like never before.

"To me, that says people see what we're trying to accomplish, that we're doing good and they want to be a part of it," he said. "That's very rewarding to me."

Oliver has many roles at the AAU Junior Olympic Games and is central to the event's success every year, though a small part of him always remembers his own experience.

Decades ago as a high schooler, he said, he was encouraged by mentors to flourish on the track, and that support ultimately pushed him to run his senior year, win a state championship, go to college, have a successful career as an athlete and then become a coach at the next level. Without that support, he said, none of this would have been possible.

So Oliver uses the Games to be a positive force for young athletes.

"What I try to do is be a positive influence and AAU is a platform to develop kids on a number of levels," Oliver said. "A lot of times, athletes don't want to hear lessons about what they should do. So I try to be around athletes, be positive and congratulate them and provide good, competitive opportunities."

Oliver also wanted to thank all the partners who made the AAU Junior Olympic Games possible, including Catch Des Moines, Gatorade, East Bay, the Carl Lewis Perfect Method and FloTrack.

"These are exciting times for us and what we're trying to accomplish," he said. 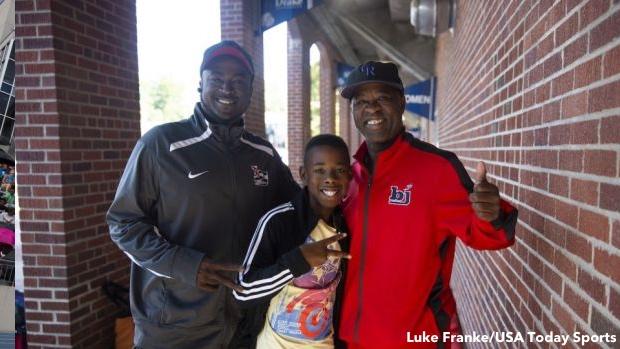