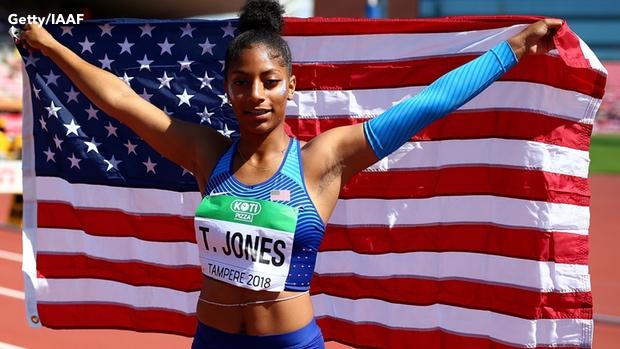 Earning her second international gold in two seasons and her first IAAF World U20 Championship, Walton High School (GA) junior Tia Jones closed 2018 with quite the performance with a win in the 100 meter hurdles on Sunday in Tampere, Finland.

Jones' impressive block start generated a sizable lead, and then a nearly clean run through the hurdles gave her enough firepower to outlast Jamaica's Britany Anderson.

Jones needed a photo finish to claim the win in 13.01 seconds, beating Anderson by 0.002 seconds.

Tia Jones finished the season with three times within top 15 in the U20 world ranks, including her best of 12.89 seconds from the USA Junior Championships. That time stood as the fourth best time in the world.

She was the only individual for Team USA to win a gold medal.

The Americans finished the IAAF World Junior Championships with 18 medals, best among all countries, though was third in golds, behind Jamaica (4) and Kenya (6).

How close was that!

Tia Jones takes gold in the 100m hurdles with Britany Anderson awarded silver with the exact same time to the thousands! 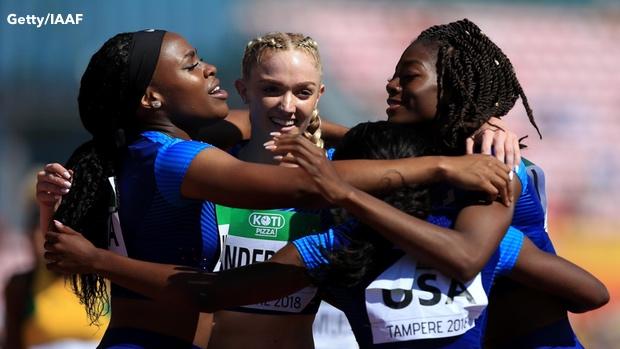 Women's 4x400 Final: This was the American's race to lose. Since 2002, Team USA's squad had won this race to end the U20 Championships, and Sunday's version was no different, with USA earning their ninth straight win in 3:28.74. But it was the closing speed of the University of Florida's Taylor Manson, who was third in the open 400m earlier in the week, that sealed the American's victory after Jamaica cut the lead to less than a second on the final hand-off. Team USA's squad consistent of Manson, Miami's Symone Mason, Oregon's Shae Anderson and Texas A & M's Julia Madubuike. Australia chased down Jamaica to pull into second  3:31.36 while Jamaica was third in 3:31.90.

Men's 4x400 Final: Team USA had a devastating setback in its first exchange after the baton was dropped between Newton (GA) graduate Elija Godwin and Brookwood (GA) junior Nicholas Ramey. While Ramey fought his way back into the mix over the next 400m, Justin Robinson, the Missouri high school junior from Hazelwood West, made up fantastic ground in the third leg to give Howard Fields--who was fifth in the open 400m--a chance to make it a race. Ultimately, it wasn't enough. Italy took the overall title in 3:04.05, while the Americans were second in 3:05.26.

For a #IAAFworlds that had been full of exciting finishes and surprise medalists, the men's 4x400m was a fitting final event for the Italians (@atleticaitalia)!

You've been an incredible host to the IAAF world U20 championships#IAAFworlds pic.twitter.com/XBmo3LGeR5