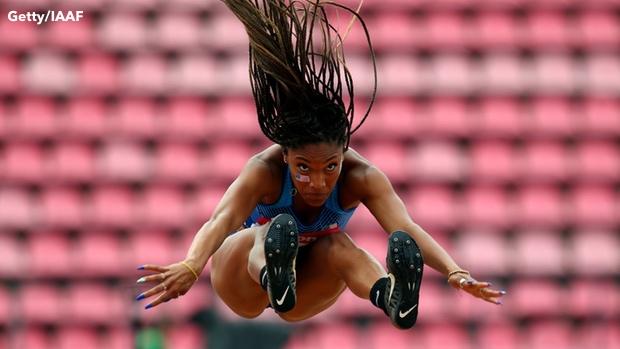 While Team USA continues to struggle picking up gold at the World U20 Championships in Tampere, Finland, the Americans have proven one thing.

Worldwide, there aren't many nations that can match their depth.

On Friday, the Americans picked up two more bronze medals, their seventh and eighth across competition, with Ohio State University sprinter Eric Harrison and University of Georgia leaper Tara Davis both earning bronze for their performances in the finals.

But that may be a little bittersweet for Davis, the world U20 leader in 2018 who owned four marks inside the top 5. She was projected to win the Junior long jump after a solid performance on Thursday in the qualifier (6.40 meters).

But the USA leaper, who finished fifth at the NCAA Championships, never quite got ahold of a big attempt over her six-jump series and only managed her best attempt on her last run.

Davis finished with a final mark of 6.36 meters (20-10.5), which was well below her best of 6.71 meters from USA Juniors and was just her eighth best mark of her career.

Tara Davis grabs a bronze! On her final attempt @tar___ruh soars 6.36m/20-10.4 to snag third place for #TeamUSATF in the women's long jump at #IAAFworlds pic.twitter.com/pKKLHqRClp

Harrison finished third in 20.79, while his teammate Khance Meyers, who looked strong in both of his preliminary races, was sixth in 20.87 seconds.

Women's 200m: Jamaica's Briana Williams was back on the track for the first time after taking gold in 100m on Thursday. This time, however, the 16-year-old was tackling the 200m semifinals with a goal of advancing to Saturday's final. As expected, Williams controlled her heat and took the victory in 23.41, ahead of the American Jayla Kirkland, who ran 23.54 to earn the second automatic qualifying spot. 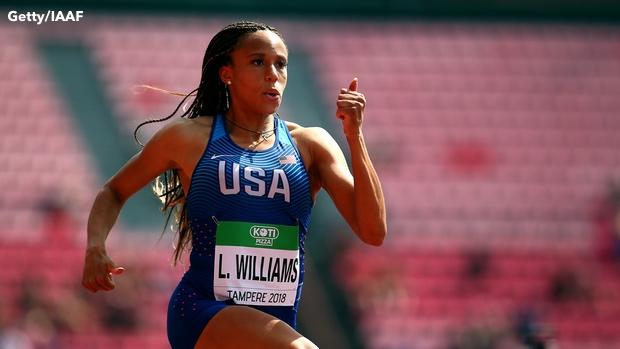 Kirkland's teammate, Oregon freshman Lauren Rain Williams, won the second heat in 23.15, the fastest time from all the semifinals.  - KS

Aouch, the relay demons stroke again for Team USA as they were on to an easy win in heat 1.

A botched final changeover led to a dropped baton, & while they picked it up and ran on, Germany , China and Great Britain had already crossed the line.#IAAFworlds

In their absence, Germany led all qualifiers with a time of 43.80. Jamaica, who was running without the newly-crowned 100m champion Briana Williams, also finished outside of qualifying position and was later disqualified.

Men's 4x100m: The USA men fared better, placing second and earning an automatic qualifying berth to the final with a time of 39.49. Neither Anthony Schwartz or Eric Harrison--the silver and bronze medalists from the individual 100m--competed in this opening round, but should make an appearance in the final. Germany and Japan turned in the fastest times, clocking 39.13 and 39.18 to win their respective heats.

Entering the final event in the heptathlon, Emerson's lead over Austria's Sarah Lagger was only two points. But Emerson won the 800m in 2:09.53, almost two seconds clear of Lugger. That performance clinched the victory and secured a personal best of 6,253 points for Emerson.

Emerson joins an illustrious group of female British female multi-eventers who have taken an #IAAFworlds title in the last four years alone pic.twitter.com/tRb1Q62Gxc

Americans Anna Hall and Sterling Lester placed ninth and 16th, respectively. Hall scored 5,655 points, with top marks coming in the high jump (1,016 points) and 100m hurdles (960). In June, Hall set the national high school record in the event when she racked up 5,798 points at the Great Southwest Classic. 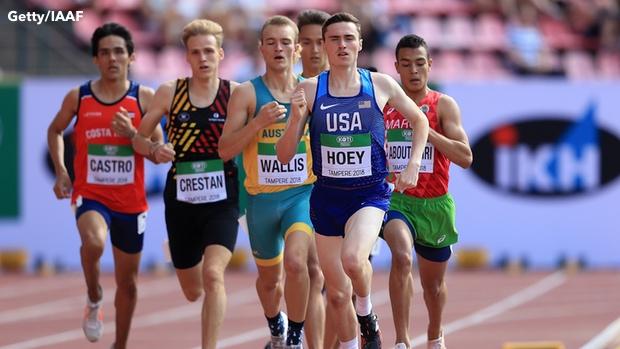 No doubt the best performance from Team USA on Friday came in the air.

Parkview Baptist (LA) graduate Tzuriel Pedigo launched the No. 9 best mark in the prep javelin all-time, finishing third with a throw of 73.25 (240-4) over qualifying during the morning session. He produced the throw on his first attempt, hitting the automatic qualifier, and then he called it a day.

It marked the Pedigo's second best performance following his 239-4 outing at the JenJavelin Festival in Germany earlier in July.

3000m Steeple Women: One of the world's best, Kenya's Celliphine Chepteek Chespol, took the stage in the final and delivered a performance befitting of her reputation.

The 19-year-old previously had orchestrated the second fastest time in the world of 8:58.78 at the 2017 Prefontaine Classic and owned up to that fitness early on. As the race began to move, she made her way to the front but it wasn't until the final three laps when when we began to see the junior athlete take over and win in 9:12.78.

400m Men's Final: A shocking upset, to say the least. Belgium's Jonathan Sacoor took over in the final 80 meter stretch, zooming past Jamaican favorite Christopher Taylor. Sacoor crossed the line in 45.03, which became a new Belgium National U20 record.

Taylor placed second in 45.38, while teammate Chantz Sawyers, the University of Florida freshman, was third. Sacoor was part of the Belgium 4x400m team that won bronze and set a Belgium national record of 3:02.51 at the 2018 IAAF World Indoor Championships in March. Team USA's Howard Fields, a Manvel (TX) graduate and Baylor University freshman, finished in fifth in 46.53.