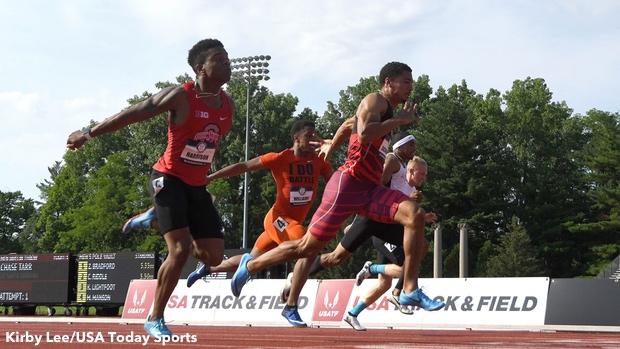 And maybe it's as simple as that.

The Plantation American Heritage (FL) graduate still hasn't lost at 100 meters in 2018. On Friday, his latest win came at the USA Junior Championships in Bloomington, Indiana.

From his dazzling semifinal, where the University of Auburn signee ran "an easy" 10.33 (-1.8), to the final, where he made sure to give a hard effort against Ohio State's Eric Harrison to win in 10.23, Schwartz continues to be unbeatable.

This took place, he said, even though he tweaked his quad before the final.

Either way, Schwartz hinted that his amplified success may have started in the winter during the indoor season. He said his work on block starts paid a difference once the spring arrived, and that training continued for another two months.

"It helped me mainly get my start better," he said. "You can still win without a start, but the important thing was the start. I focused on that."

Pressure? At the very least, he has sensed some kind of expectation at some point during 2018. Internally? From others? The media, aka the hype train?

"Just knowing what people expect of me every week," is what pushed me to "want to run fast times," he said.

Sounds simple enough. But that positive makeup continues to work wonders for the sprinter.

"I just try to relax in my races," he said. "If I'm relaxed instead of trying to force a time, I race faster."

And now that Schwartz has officially qualified for the U20 Championships in Finland, he says he's turning his attention to competing against international competition.

"I want to show everyone," he said. "I want to be the fastest person ever."

DID THAT REALLY HAPPEN?

The Baylor signee, who cleared as high as 18-5 in previous months, had went over 18 feet in seven straight meets. He was the closest thing to a lock.

But then Lightfoot did something that came back to haunt him.

When he cleared the bar on his first try at 17-10.5, he decided to pass over 18-0.5. Meanwhile, Bloomington's (IL) Zach Bradford and Arizona State's Cole Riddle didn't. They chose to take it, and both nailed the jump on their first attempt.

Lightfoot had problems at 18-2.5, and so did Riddle, but Bradford didn't.

He popped over the bar on his first attempt, while the former two started a series of three misses that would end their runs.

Bradford wasn't the favorite to win. At most, he was likely third in line to earn a place. But when things happened, the Illinois prep stepped up and did what needed to be done.

Not only is he a USA Junior Champ, but in July he'll wear Team USA colors for the first time. 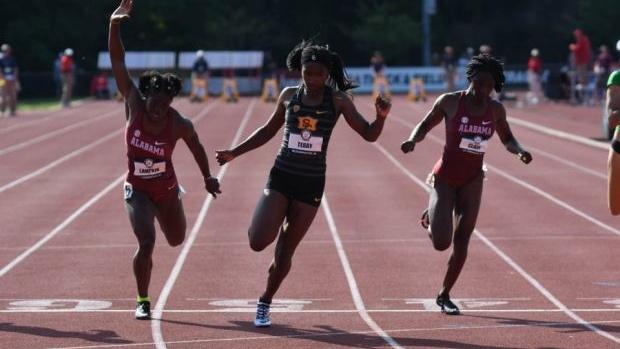 The women's 100 meter final had a decidedly collegiate feel. Seven out of the eight finalists were all from major Division I programs, with Girard College (PA) junior Thelma Davies being the lone outlier in high school.

It wasn't meant to be for Davies. While she came through the semifinals in sixth, logging a time of 11.51 (-0.7) seconds, the college women weren't playing around in the final. Davies improved, but finished fifth in 11.42 -- which did one of two things: 1. granting her a new state-record;  and 2. earning her a spot on the USA relay pool.

Terry crossed the line in 11.24 seconds and was quite pleased with the performance. After all, it was another big win. Terry had won the Pac-12 Championships in May--dipping under 11 seconds in 10.96--and had finished first at the NCAA West Prelims. She even had the second fastest wind-legal time in the country in 2018, clocking a 10.99 (+1.7).

When asked what her freshman season in California had been like, there was only one response.

SHOUT OUT FOR WISCONSIN

It was a big day for Wisconsin preps. Both were high school juniors, actually.

First, it was Wausau West High School's Brooke Jaworski, who outranked every single runner in the 400 meter hurdles on Friday with a semifinal time of 58.68 seconds. This included LSU freshman Jurnee Woodward, who finished her NCAA season with the 24th fastest time in the country (57.77). It also included US No. 1 Masai Russell, a Bullis School (MD) grad who squeaked into the final with the seventh fastest time in 1:00.19.

Maybe that was just the work of semifinal runs. But it looked like Jaworski had some left in the tank. She moved up to US No. 3 after the effort.

Then there was Homestead's Drew Bosley. He had a ton of work to do in the men's 5K to meet the U20 standard of 14:15.00, which seemed a little ridiculous considering it was 85 degrees out when the men lined up. But Bosley never backed off and he took control six laps in.

And he did it against a mostly collegiate field.

His plan was to go out in 70s and maintain that pace throughout. And he kept to it, only wavering a few laps at 72 and then closed hard under 70 in the final two frames to win in 14:32.75. It earned him a new US No. 1 effort at the distance.

It wasn't going to take a herculean effort for the Duck freshman to reach Finland. He played things smart, managing his time on the track to finish second in 14:33.54. Essentially, he made sure he earned an auto qualifier.

While he took over the lead in the final two laps, Bosley kicked past him with 200 meters to go. But it didn't really matter. By virtue of his 13:46.46 from Bryan Clay in April, he had already met the qualification for U20.

He simply needed to be in the top two places to guarantee a trip.

But that wasn't the impressive part. Instead, it was his belief before he even stepped on the line.

That was the ballsy part.

Weeks prior to getting on the line, Teare and his parents had bought plane tickets to Finland. He essentially told himself, If I race how I should, I'm already there.

On Friday, he made sure it happened.

THE I-FELT-A-LITTLE-PRESSURE-SO-I-HAD-TO-BRING-IT AWARD GOES TO...

The 18-year-old had to feel a little pressure after watching Wichita State freshman Taran Taylor bomb a 71.08 meter throw (233 feet, 2 inches) on his first attempt. Pedigo, who perhaps had thoughts of earning a USA Junior title, stumbled out of the gate--admittedly nervous--and chucked his first attempt around 60 meters.

But after that slight whiff of anxiety, Pedigo got back on track and reverted back to normalcy. The thrower went 220-10 on his second attempt, sliding into second place, and then went for broke on his last attempt of the finals, hitting just his third throw over 230 feet this season with a haul of 231-3 (70.48).

Pedigo already had the U20 standard entering the competition (60.70), so all he needed to worry about was claiming first or second. He did that, and now he's headed to Finland. 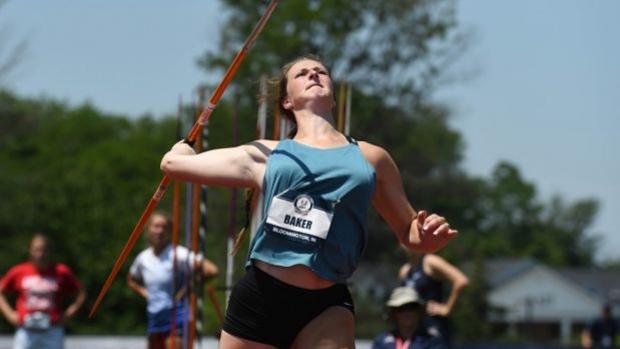 She had PR'ed with a throw of 175-6 in May, and had generally had looked good for much of the season. She popped two other throws over 170 and five over 160. But there was also this: She had lost her US No. 1 title to Skylar Ciccolini two weeks ago. Would the pressure of going after another big throw get the most of Baker?

The answer came as quickly--and it was a resounding "no." The Kansas stud thrower bombed a US No. 1 heave of 178-1 on her first attempt, and it would ultimately win her the competition.

Bucknell's Maura Fiamoncini offered the stiffest competition that same round, going 177-3. But no one else would really get close. North Carolina's Madison Wiltrout managed a toss of 173-5 on her sixth series to finish third.

Baker landed one other throw over 170 and had three others over 160.