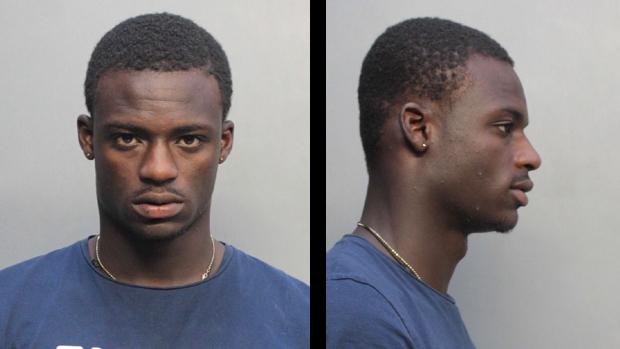 One of the country's top high school track and field athletes has been arrested.

He is being held at the Turner Guilford Knight Correctional Center in Miami Dade County on $20,000 bond.

Cooper, who owns multiple age group and high school class records and recently turned 18 in March, has raced sparingly this outdoor season while nursing injuries. He ranks US No. 14 in the 100m (10.47), US No. 5 in the 200m (20.81), and US No. 4 in the 400m (46.40). It remains unclear whether he will be able to defend his Florida state titles in those events this weekend in Jacksonville.

According to a report by the Miami New Times, however, Miami Norland athletic director Robert Ryan called Miami Gardens Xpress coach Darius Lawshea, the guardian of Cooper and club coach, that he "would not be allowed to compete in the state tournament."

The Florida High School Athletic Association Championship meet is set to begin Friday at the University of North Florida. Cooper won two state titles in the 200m and 400m and finished second in the 100m in 2017 before moving on to New Balance Nationals Outdoor, where he won a title in the 200m. He went on to the AAU Junior Olympics, where he claimed victories in the 200m and 400m.

Update: MileSplit has reached out Miami-Dade County Public Schools for comment on Cooper's eligibility for the state championships, though calls have been unreturned as of yet. Miami Gardens Xpress coach Darius Lawshea has not returned messages.

Ed Thompson, the Florida High School Athletic Association's administrator for track and field programs, said on Tuesday the state does not have a say on eligibility for cases outside of governing sports within Florida.

An open criminal case is dealt within the school district in which the issues reside. "We don't handle any of those issues," Thompson said. "Those issues are left up to our member schools."

The FHSAA only deals directly with issues revolving academic eligibility or within the sports the association governs.

"We officially do eligibility and compliance with anything related to academics or things that occur within the playing field. We defer to our schools in other cases."

That will mean Miami-Dade County Public Schools will have the final say on whether Cooper, who has qualified for the 100m, 200m, and 400m at the state championships, will remain eligibility during an open investigation.

Update: The Miami New Times' Chuck Strouse received access to a police report from the Miami-Dade Police Department and reported Tuesday that four teenagers were stopped at Miami International Airport on Thursday, April, 26, with the intention of trying to steal cars. A bolt cutter was found at the scene and Cooper, according to the report, "admitted to being driven to the rental car center to steal cars." "On Thursday afternoon, according to a police report, he (Cooper) was stopped with three other young men of about the same age -- Shomari Durosier, Andy Vieux, and Kareem Boothe -- at the airport's Intermodal Center. The boys had driven into the building, where several cars have been stolen in the past. After authorities spotted a chain blocking off cars that had been snipped, they called police." XXXXXXXXXXXXXXX

MGX coach Darius Lawshea, who had taken in Cooper into his home when he was 13 -- Cooper's mother and aunt are also in his life -- said that Cooper had been distancing himself from him lately.

"I was like a dad," Lawshea told Strouse. "But then he started battling me about being a dad and a coach. We were bumping heads, and he was being disrespectful, not coming home for curfew. He did it in front of my wife, and I had to ask him to leave. Then he fell in with the wrong people."

Update: 10 ABC News in Miami is reporting this is the second time Cooper has been arrested in a little over a month. According to 10 News' Carlos Suarez, the 18-year-old was "picked up" by police in April at a Wal-Mart in Miami for lifting "chips, candy, and cookies."

Cooper appeared in court on Tuesday to face a judge and is being held on $20,000 bail.