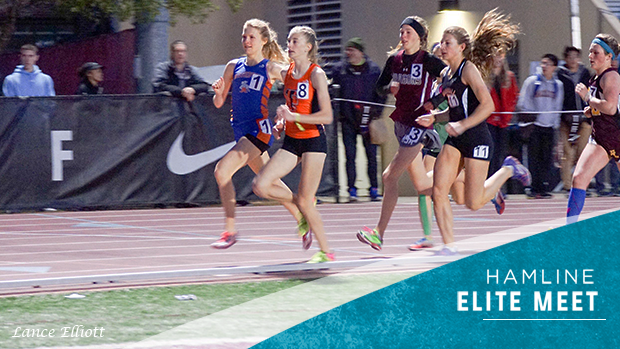 This year's Hamline Elite meet should be stronger than ever. With Minnesota having had so many meets canceled and postponed due to winter-like weather lasting long into April, many teams have been itching to get in some competition to run fast times.

Tune in to MileSplit on Friday, April 27, to watch some of Minnesota's best compete at Klas Stadium on the campus of Hamline University in Saint Paul, Minnesota. The meet is set to start at 5:30 PM with the last event starting at 9 PM.

When: April 27 at  5:45 pm (CDT)
Who: Stillwater Area, Wayzata, Minneapolis Washburn, Eden Prairie
Why: This race has four teams entered with sub-eight-minute times. The fastest seed time is a tie between the guys from Stillwater Area High and the guys from Wayzata. Both teams are entered with marks of 7:51. Currently, a 7:51 would rank top-10 in the country.
With so many teams seeded at sub-eight minutes, this could be quite the battle up front and we could see several teams hit a top-10 US time. The guys from Stillwater Area will be looking to hold onto the title after a very close battle last year with Wayzata. Stillwater Area came out with the win and a new meet record time of 7:55.01. The top three teams in last year's race all went sub-eight and under the previous meet record time of 7:58.78. Watch for another close battle this year.

When: April 27 at 6:57pm (CDT)
Who: Acer Iverson (Roseville Area High School), Abati Dedefo (Saint Louis Park High School)
Why: Acer Iverson and Abati Dedefo have the two best seed times at 4:20.22 and 4:20.23 but this really is anyone's race. All 16 guys entered have run faster than 4:27. Iverson's seed time/PR came from last year's MSHSL Section 4AA Championship where he finished second, while Dedefo's seed time/PR came from his MSHSL Section 6AA Championship meet. The meet record of 4:10.5, held by Joe Klecker from Hopkins High School (MN), is probably safe, but nonetheless, this should be a very exciting race with so many of the guys so close in seed time.

When: April 27 at 7:05pm (CDT)
Who: Emily Kompelien (Edina), Lauren Peterson (Farmington), Emily Covert (Minneapolis Washburn), Tierney Wolfram (Math & Science), Lauren Ping, (Winona Cotter), Grace Ping (Winona Cotter), Caroline Sassan (Wayzata)
Why: This is going to be hands-down one of the best races of the meet and maybe of the weekend for distance events. The race has not only some of the top girls in the state of Minnesota entered but these girls are also some of the best in the nation. Let's start with last year's Hamline Elite 1600m champion Lauren Peterson from Farmington (MN). Last year Patterson ran 4:56.48 to earn the win by only a second over Edina's Emily Kompelien 4:57.35. Both of these ladies will be back this year to face off again in the 1600m; the big difference is that they probably won't be the only two under five minutes. They, along with Emily Covert from Minneapolis Washburn, are entered with seed times which are under five.
You can't count out the rest of the field, though, because of seventh-place Foot Locker Nationals finisher Tierney Wolfgram, ninth-place Foot Locker Nationals finisher Emily Covert, and Grace and Lauren Ping. All four have a shot to put their names in the hat for the win. If conditions are right and the race runs like it should, I would not be surprised if Holy Family's (MN) Bria Wetsch's meet record time of 4:49.50 went down this year. If that were to happen we would see some new faces in the top 10 of national 1600m rankings.

When: April 27 at 8:04pm (CDT)
Who: Danielle Bellino (Lakeville North), Emily Kompelien (Edina), Lauren Peterson (Farmington), Elizabeth Halbmaier (Minnetonka)
Why: This should be a strong race as the entire field has seed times sub-2:18. The top seven athletes are all seeded with times that are sub-2:14. Lakeville North's (MN) Danielle Bellino comes in with the top seed time of 2:10.56. She ran that time last year in the prelims of the MSHSL State Track and Field Championships. If she's able to run that time or close to it, Ruby Stauber's meet record of 2:10.87 could go down.
We also can't count out last year's champion in Minnetonka's Elizabeth Halbmaier, who ran 2:18.42 for the win, or Farmington's Lauren Peterson, who wasn't far behind her running 2:18.76 for second place. If seed times hold true, though, we should see this year's winning time much faster than last year's.

When: April 27 at 8:35pm (CDT)
Who: Emily Covert (Minneapolis Washburn), Tierney Wolfram (Math & Science), Lauren Ping, (Winona Cotter), Grace Ping (Winona Cotter), Anna Fenske (Farmington High School), Emily Kompelien (Edina)
Why: This race, much like the 1600m, is one that you're not going to want to miss. It features some of the same top talents as the 1600m. The top seed time is held by Minneapolis Washburn's (MN) Emily Covert who was top-10 at Foot Locker Nationals last fall. Covert holds a seed time of 10:13.28 which is well ahead of the rest of the field including last year's champion Anna Fenske from Farmington (MN).
In 2017 Fenske took the lead from the gun with Covert on her shoulder. In the end, though, Fenske pulled away to take the win running 10:41.25 despite Covert having the top seed time heading into the race. Covert finished in second running 10:52.32 while Tierney Wolfgram from Math & Science Academy finished third in 10:41.84. This year's results could look very similar to last year, but one athlete will look to throw a wrench into things. That athlete is Grace Ping, who will be back in the mix after a year hiatus when her family moved to Utah. In 2016 as a 7th grader, Ping ran 10:32.11 to take second at the Hamline Elite meet. We also don't want to count out her sister Lauren Ping, who's already run 10:41.54 for Minnesota No. 1 this year. All in all, this is a stacked race and one that could shake up the top 50 times nationally.

When: April 27 at 8:21pm (CDT)
Who: Khalid Hussein (Wayzata), Joseph Minor (Minneapolis Washburn High School)
Why: Khalid Hussein from Wayzata is the favorite in this race; he comes in with the top seed time in the field of 9:16.10. Hussein's PR is 9:10.97 from the 2016 MSHSL Section 6AA Championship. He hasn't run that fast in a 3200m since but did have an excellent cross country season, finishing third at the Nike Cross Nationals Heartland Regional and 10th at Nike Cross Nationals.

When: April 27 at 5:30pm (CDT)
Who: Mitchell Weber (Saint Clair), Samuel Moore (Bertha-Hewitt High School)
Why: Saint Clair High School's Mitchell Weber comes into the meet above and beyond the best mark in the field with his mark of 196 feet 10 inches from the 2017 Maple River Invitational. The key for Weber to win this will be finding consistency. He's only thrown over 190 feet once and over 180 feet twice with his average throw being around 170-175. Also in the mix will be MSHSL State Track and Field Class A champion Samuel Moore, who beat Weber at the state meet with a throw of 180-06.

When: April 27 at 7:00pm (CDT)
Who: Julia Fixsen (Mounds View High School)
Why: Mounds View High School's Julia Fixsen will look to better her 13-1 meet record which she set to win the 2017 Hamline Elite Meet. Already this year she has vaulted 12 feet for Minnesota No. 1 outdoor, in a meet where there was still snow on the ground. That mark for her is nowhere close to where she was indoor as she hit a US No. 3 vault of 13-9 which is also an all-conditions state record. You can be sure if conditions are right that the New Balance Nationals Indoor (NBNI) runner-up will be looking to hit a top 10 outdoor mark in St. Paul.

*Note field events might not be available on live stream.