Just one year after he set his first world junior outdoor record at the Texas Relays, the LSU signee once again came up big in the spotlight, clearing 19 feet, 5 inches to finish third in the men's elite section at the University of Texas' Mike Myers Stadium on Saturday.

After the culmination of the event, Duplantis was whisked away for drug testing, which could validate his record attempt.

Last year's winner of the event, Duplantis finished behind Olympic silver medalist and indoor world record holder Renaud Lavillenie of France (19-5) and Canada's Shawn Barber, who both also cleared 19-5 but on earlier attempts. All three athletes passed at 19-7 to make attempts at 19-9, which culminated in three straight misses for all three competitors. 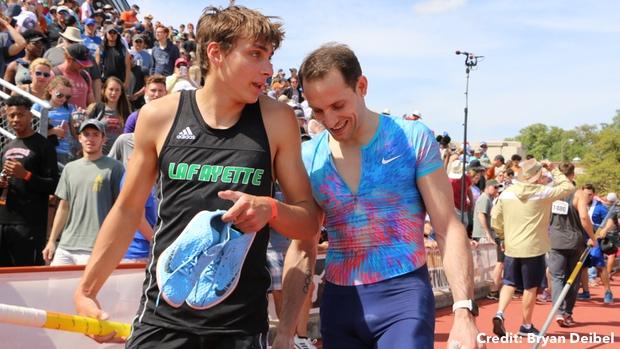 This once again added to the legendary storyline of the 18-year-old Duplantis, undoubtedly the greatest high school pole vaulter in history, who cleared 19-4.5 at this very meet in 2017 and won the elite men's section as a high school junior. It marked the fifth time Duplantis, who also owns the indoor world junior record, has cleared 19 feet over his high school career. In February, Duplantis cleared 19-3.5 indoors at an all-star meet in France before the 2018 World Indoor Championships in Birmingham, England, where he finished seventh.

This time, though, Duplantis had to overcome what seemed like uncertainty entering the meet, as his high school association in Louisiana, the LHSAA, almost did not allow him to compete in Austin, Texas.

Duplantis, however, received a waiver just a few days before the competition, keeping his high school eligibility through the spring season as he tries to win his fourth state title.

But competition may only be an internal struggle from here on out for Duplantis. As he looks to finish out his remaining months of the high school season in Louisiana, likely no competition will equal anything that came today.