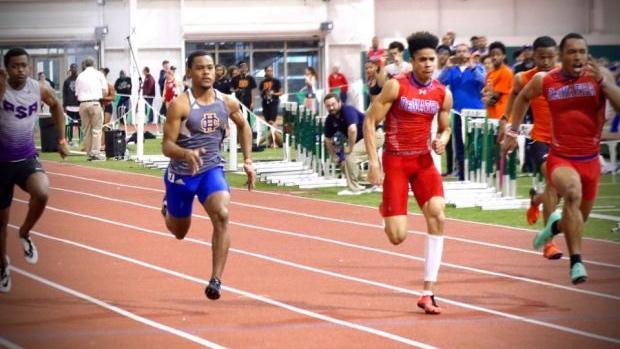 Langston Jackson is back to being the sprinter he knows he can be.

And that was especially evident in February, when the Lexington Henry Clay (KY) High junior ran what was then the third-fastest 60m time in the country in 6.72 seconds, finishing just behind a loaded duo from DeMatha Catholic (MD) High: Brendon Stewart (6.66) and Nick Cross (6.68).

Jackson didn't stay at No. 3 for long.

Nearly a month later at New Balance Nationals Indoor, American Heritage (FL) High senior Anthony Schwartz decided to run and went a US No. 1 effort of 6.59 seconds, which was the second-fastest time at the distance all-time.

But lo and behold, Jackson didn't move very far. He currently sits tied with three others nationally with the fourth-best 60m indoor time in the country.

And perhaps only Jackson and his coach know how important that feels.

"I knew he could run last year," said Jackson's coach, Demetrius Gay. "But last year with that injury; it kind of tempered him a little bit. Some weeks we had to rest him. We didn't want to push him too much on that knee.

"But this year he's healthy," Gay added. "He looks good."

Jackson tore his MCL going into his sophomore track season with Henry Clay, doing so in football, where he was a second-team All-City defensive back for Henry Clay this past fall.

"I took physical therapy for six months after my injury," Jackson said of his recovery. "So it took some time for me to get ready for track."

What continued to inspire him, he said, was the memory of Trinity Gay. The daughter of Olympian Tyson Gay, Trinity was killed outside a Lexington, Kentucky, restaurant in October of 2016.

"She was one of my closest friends," Jackson said. "I wanted to do something for her, because I know she can't do it anymore. So I run through her."

"He's an awesome talent," Demetrius Gay said. "He loves football, but I think track is his calling. We've seen it from his 8th-grade year to his freshman year. He loves the competition. He knows whenever he steps out there, he's one of the fastest kids in the state."

When will those efforts happen?

Jackson said his opportunities for those state-record attempts will be closer toward the end of his season, when he gets to face off against Southwestern (KY) High junior JP Vaught at the Eastern Relays and states.

"He and I are good friends," Jackson said of his competition with Vaught. "We compete and stuff, but we also talk. He's probably the fastest guy I've ever run against."

But yet again, the indoor season was a good indication of just how good Jackson feels heading into outdoors.

The junior ran three indoor meets, including his confidence-boosting 6.72 second 60m at the Marshall High School Open race on February 24.

But nearly a month before, in his first race at Kentucky, he lined up against Vaught in the 60m.

The gun went off, and Jackson tore out of the blocks with abandon, grabbing the race as quickly as it started, in 6.82 seconds.

He later finished fifth in another meet at Kentucky, finishing behind New Balance Nationals Indoor finishers Eric Allen Jr. and Marcellus Moore, but later would best their 60m times.

"I know I can run with anybody," Jackson said. "When I ran that time at Marshall and it was US No. 3, it blew my mind. But I knew I was up there."

And now heading into the outdoor season, Jackson knows he's back to where he once was. And he's ready to get after it again.