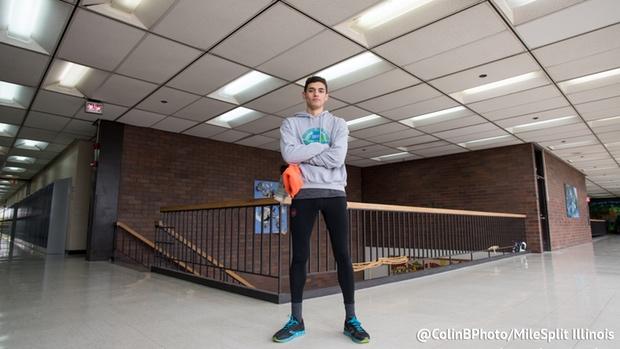 There is a commonly held stereotype with city athletes who favor distance running in the fall, winter and spring for their local high schools, and it's this:

They can't hang with their suburban neighbors.

But it's a myth that Clayton Mendez, a senior at Whitney Young High in Chicago and one of the nation's top talents, has done well to dispel in his six years of running.

While there are outlier schools like Sandburg, York, Lyons Township, and New Trier -- all located less than 20 miles from the Windy City and perennial contenders at the annual state track and field championships -- it's often few and far between for city programs that can compete at the highest level.

Chicago is the largest city in the state of Illinois and accounted for roughly 21 percent of the total population of the state in 2017. But between 2007 and 2017, athletes from the city only represented an average of 5.2 percent of the top 50 performances in all classifications at the annual state cross country championships.

The lowest point came in 2007, when only two boys finished in the top 50 among all three classifications. The region's big moment came in 2012, when Jones College Prep, led by coach Andrew Adelman, gave the Chicago Public League its first cross country state title since 1963 -- it was spearheaded by the renowned Chicagoan, Jamison Dale.

To those who know it well, Chicago is crowded and flat. Compared to its suburban neighbors, it also doesn't have as many facilities for running. Many public schools lack adequate funding, as demonstrated by Mendez's school, which is predominantly known for its remarkable basketball program.

But there is one thing the city isn't missing: the drive to prove itself. 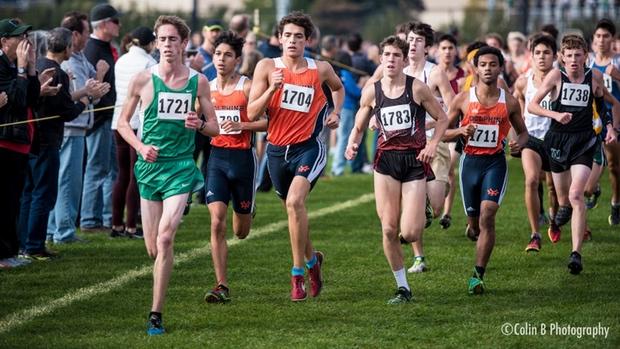 Mendez embodies the city with seemingly every step he takes. He's got that ineffable tenacity of a Chicagoan, but his willpower also is one of his greatest strengths as a racer. He's got swagger, but he's also got a bright future. He's headed to Stanford University in the fall.

"Being from Chicago and having my school to back me...it gives you a huge sense of pride," Mendez said. "I know that the people I race with kind of know that about me. I'm always talking about the city -- because it does mean a lot. ...You're coming from a school that doesn't have a whole lot, and that's the majority of the schools here given the little space that we all have."

This "little space" is no small issue for Chicago runners. For athletes at Whitney Young, there is no track to practice on -- instead, when it's warm out, they run around the school on the all-concrete sidewalk in roughly 600m intervals.

When the weather is cold, athletes run on the tiled halls of the art school building -- 178 meters around. Once inside, they have to share space with lacrosse, dance, and baseball.

One of the closest public tracks is nearly 10 miles away, located on the lakefront on Chicago's North Side -- the team trains there via public transportation twice a week. And even within these constraints, the program's athletes are capable of finding competition, both within and outside the boundaries of Chicago.

Billy Poole-Harris, the head cross country coach at Whitney Young, attributes his team's success to the competition they face each season. We get to "compete with athletes of Neuqua Valley, of Hinsdale Central, and of Plainfield North and the like," he said. 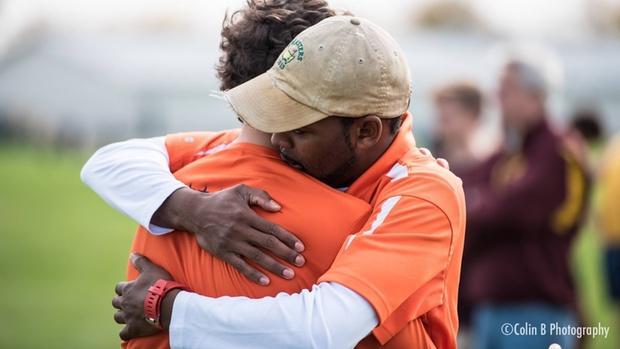 In his 11th season as a coach with the Dolphins, Poole-Harris has seen significant change for the Dolphins over the years.

In 2013 they finished ninth in the Chicago Public League. Yet two years later, his team made its first of three consecutive-state appearances. The Whitney Young boys peaked with a respectable fifth-place finish in 2016.

"I believe coaching is an art, and [to coach] in the city, you have to have an artistic paintbrush when you have kids traveling an hour and a half to school versus 20, 30 minutes in our suburban counterparts," Poole-Harris said. "[Chicago] kids are a little bit more mature -- they see real-world experiences here in the city...and [there's] a different mindset where kids can thrive from."

Last month, Mendez competed at New Balance Nationals Indoor, dropping a then-US No. 4 time of 9:06.11 in the two mile.

And yet he had to do it in the "slow" heat. It was another example of a Chicago kid getting shade.

But it was nothing new. Remarkable performances like this have been a part of Mendez's repertoire as of late, with his track record since 2017 including a second-place finish at the IHSA Cross Country Championship and All-American finishes at NXN (18th) and at Foot Locker Nationals (9th).

Mendez even ran for Team USA for the first time in his career, accepting an invitation to run for an American junior team at the Great Edinburgh Country International Challenge in January; he placed 15th.

As a freshman, Mendez left his first mark on the state with a notable 15:10 finish on the celebrated three mile course at Detweiller Park. That very spring, he clocked a 4:28.40 in the 1600m.

But his journey in distance running hasn't always been easy, and hardships have inspired his success. Mendez's junior cross country season was stifled due to unforeseen trauma and illness, with those events ultimately impacting his success as a runner.

"My uncle had passed away in a bike accident and that was in the beginning of October [2016]," Mendez said. "That was when cross country season was starting to go full-tilt for me. We had gone out to Seattle for the funeral and I ended up getting pretty sick from running out there."

Mendez had come down with bronchitis, and a week later his father suffered a heart attack.

"I really tried to get my head back in the game but there's a certain point where you just can't do it," Mendez continued. "I ended up running pretty poorly," he said, noting his 79th-place, 15:17 three mile finish.

Mendez spent some time thinking about the path he wanted to take as an athlete.

"I just had to get my head back into it," Mendez said. 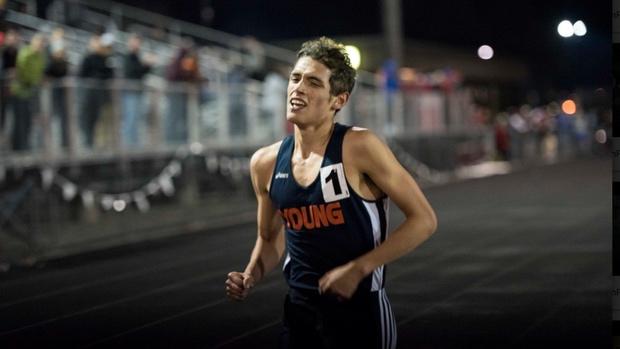 Photo by Colin B Photography

And that he did. He was able to get back in gear by the following track season, dropping a scorching 8:59.46 at the Distance Night in Palatine in April, 2017.

Despite his impressive performances on the course and track, Poole-Harris said that Mendez was not always a runner. Like a lot of Chicago teenagers, he was a basketball player. Poole-Harris believes that the skills Mendez attained prior to running helped him transition from shooting hoops to running.

"With his tenacity and commitment to running, and his athleticism, [which he gained through] basketball....it gave him a clear path on how to be competitive in cross country," Poole-Harris said.

Mendez's athleticism still lives with him, too. Most days he finds himself training in the pool for 40 minutes before school starts, and then there's training for cross country or track afterward, followed by weight training.

The City and The Runner

To Mendez's longtime teammate, Samuel Rivera (a junior at Whitney Young), he sees Mendez's performances as an inspiration.

"It makes me feel like even in our urban landscape, anything is possible," Rivera said. "We don't have the track, we don't have the fields -- it's really hard but we get it done and thanks to Clay it's been proven."

Rivera, who has another season ahead of him at Whitney Young, said he looks up to Mendez and pictures himself someday chasing a few of his records.

One of Mendez's fondest memories was watching the state track and field finals his freshman year in 2015 when fellow Chicagoan, Lane Tech's Pavlo Hutsalyuk, come from behind against some of Illinois's best to drop a US No. 14 time of 4:08.19 in the 1600m to win Class 3A.

"To see him do that, it put all of us [my team] in this amazement for a second because you have someone so close to home do something like that -- kinda do the unthinkable... [and] to see it...it gives you hope," Mendez said. "It gives you something to work towards because, again, you don't hear of a lot of kids from the city doing major things like that."

"He really set the foundation for making it possible in my eyes," Mendez said. "Once he left and graduated it was kind of up to me to make sure that I take advantage of the opportunity, so I'm trying right now."

And those high hopes are driving Mendez in his final season. Before he starts his training for Stanford in the summer, the Whitney Young senior wishes to win state in either the 1600m or the 3200m. It's the one thing that's still eluding Mendez.

However, his goals are high, with hopes of running like Hutsalyuk back in 2015.

Just last week while in California competing in the elite boys 3200m at the Arcadia Invitational, Mendez was less than a second away from achieving that honor. He finished in 9:00.78.

"I think you have some of the best guys in the country in our state and we're all going to be in [Class] 3A, so to face off with each other, it's going to make some really good races," Mendez said.

Mendez faced Kilrea in Texas last month, clocking a US No. 4 time of 14:38.05 in the 5K at the Texas Distance Festival. He was third overall, just behind winner Carter Cheeseman of Fort Worth Christian and Kilrea.

Only time will tell what this Chicagoan will do.

But in the meantime, he's still a high school student from Chicago who enjoys joking around with friends and relaxing at the pool by himself during lunch.

Being a city kid who's great at distance running will prove itself soon enough. 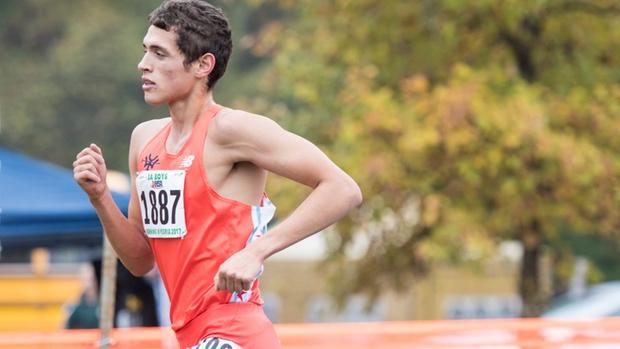 Photo by Colin B Photography