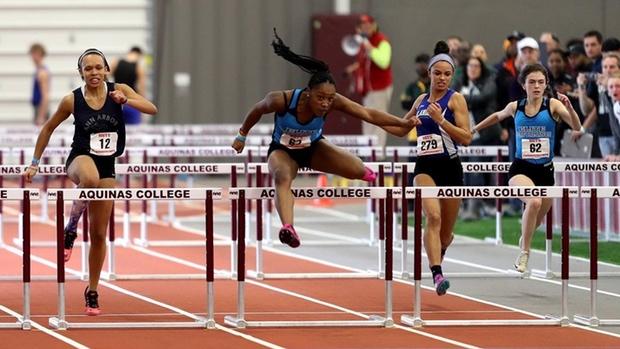 Before her junior indoor season, as always, White Lake Lakeland (MI) High junior Grace Stark set goals. But it wasn't long before the hurdler and short sprinter had to readjust. The talented multi-athlete from White Lake, which is about 40 miles northwest of Detroit, is performing at the highest clip of her career, owning a nation-leading mark in the 60mH and a top 10 mark in the 60m. We caught up with the emerging junior to talk about her season and what she's looking forward to as the postseason nears.

1. You've had a fantastic junior indoor season so far, posting a US No. 1 in the 60mH of 8.25 and a US No. 6 of 7.52 in the 60m, which are fantastic times. Have you met any of your goals so far, or have you exceeded them and been forced to create new goals?
I have been forced to make new ones. I didn't expect to be this fast this soon in the season.
2. What are your goals to finish out this indoor season?
My goals for the end of the season are to be a (Michigan Indoor Track Series) state and a (New Balance Nationals Indoor) champion in the hurdles and in the dash. And with that, an All-American.

3. What was a specific focus for you when it came to progress/development in the 60mH entering the indoor season? As most know, the progress many athletes make in indoors often transitions right to outdoors, where athletes can finely tune things to hit even greater times. Have have you used your work to get better?
This year I focused  on working on better form over the hurdles. I also did a lot more preseason conditioning, which improved my endurance and I expect to improve my times as result in the outdoor season.

5. Michigan has a strong tradition of great track athletes, and the state has a great platform for efforts with its Michigan Indoor Track Series. How much has competition boosted your performances?
I have enjoyed running up against some of the fastest runners in the country; they have pushed me to run even faster.
6. What meets do you have coming up on your schedule?
I have at least six meets left:
.
7. What race or races were the most eye-opening for you this season? How did they change or adjust your perception of your goals?
I got my personal record of 8.25 seconds in the 60mH, which broke the Michigan state record. I was surprised that it came this early in the season and since it did, now I'm striving for that national record -- which was achieved by Tonea Marshall in 2016 with a time of 8.02 seconds.

8. You went to New Balance Nationals Indoor for the first time last year and competed in the championship of the 60mH, where you finished seventh in 8.42 seconds and were in the Emerging Elite division of the 60m, finishing third in the 60m (7.54). How important was that for you to race against national competition?
I was there my freshman year, too, and I ran the Emerging Elite 60mH and the freshman 60m, where I placed fourth. It was more challenging the following year because I was in the championship section running against the best in the country. But I'm glad for the experience because I feel more prepared for this year.

9. How have your motivations changed going into that event this year?
Being that I just missed All-American last year, I am extremely motivated to place and possibly win.

10. Since you're a junior, you've stepped into another world with recruiting. The first period Division I colleges could contact you came in August and ended in December, but now you're amid a nearly six month period again. Do you have a plan when it comes to recruiting?
Not at the moment. Right now I'm just focusing on being the best student-athlete I can be.
12. What's been most helpful for you going through the whole process?
My coaches dedication, and my family's support.

Quick Hits
1. Album you must listen to before competition, or song that gets you ready to race?
Acid rap and Coloring Book -- Chance the Rapper

2. Who's your role model and why?
Gail Devers. She was around my height, she has the same build and we excel in the same events!

4. What's been your favorite moment running for White Lake Lakeland?
When I broke all the conference records in my individual events the last year before they closed our conference and started a new one.