All it took was one team to disrupt the pecking order at the NXR Southeast Regional.

Of course, that happened twice on Saturday.

Regionals are never quite so predictable, and in arguably the deepest boys region in the country at WakeMed Park in Cary, North Carolina, Bolles (FL) School came out of the woodwork to score an automatic qualifier to NXN on Dec. 2 with a second-place outing.

While Flo50 No. 2 Loudoun Valley remained at the top of the charts, finishing 2-4-14-22-49 to score a dominating -- and convincing -- 72 point win over the field, it was the underrated private school from Jacksonville that completely changed the dynamic of the nation's placeholders behind them.

Scoring just seven points shy of third-place No. 13 Green Hope (NC) High, Bolles grabbed the final qualifier with 118 points and placed the weight of an at-large bid on the Falcons, who finished with 125 points. No. 24 St. Xavier (KY) followed in fourth, but that also meant that No. 16 Milton (GA), which had one of the best runs in Georgia history this fall, was eliminated from NXN consideration.

"We've been working ourselves to death, but at the same time it's taught us we can compete with other teams who run hills all season and we can run at this competition," said Bolles junior Charles Hicks, who finished third in 15:05.7. "People told us we couldn't. But fantastic leadership and structure from our coaches got us to this point."

And then there was Brentwood Cross Country Club, with just six runners and a season composed of just two races. The team finished sixth overall -- probably running above where most people thought they would fall on Saturday. They were just 28 points shy of an at-large position. Their second finisher, Scott Thompson, was just one place outside an individual berth to NXN in ninth overall.

"I think that all of our guys will be happy at the end of this race," said Brodey Hasty, who won NXR SE for the third straight season, this time in a meet record of 14:36.2.

But if Southeast was destined for some surprising moments, Bolles wasn't the only candidate, either. In the girls championship race, everything came down to the final 1K and it was two unlikely teams who grabbed the pole positions for NXN.

Cardinal Gibbons (NC) posted a winning score of 120 points while Louisville duPont Manual (KY) High, which won its second straight title in Kentucky this season, flourished in the final moments to finish second.

"We saw the rankings," duPont Manual coach Tim Hollman said. "We knew our name wasn't on any of those. But we kept saying 'Why not us?'"

The Louisville-club may potentially snub Flo50 No. 15 Blacksburg (VA) High away from an NXN berth. The Trojans, who are first up for an at-large berth if NXN's committee decides upon their selection, finished third overall with 157 points, tied with Pine Crest (FL).

Pine Crest was on the precipice of their first berth to NXN, too, after finishing four runners in the top 30. But it's fifth runner had a difficult race and fell in displacement.

"More than anything, we want to represent the state of Kentucky and do our best for the state," Hollman said. 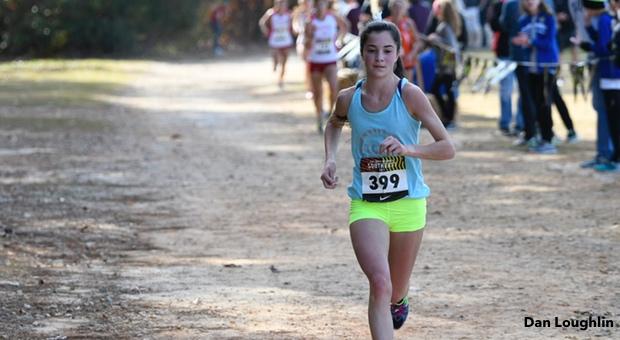 Neglia, a sophomore from Dobyns Bennett, was second overall after leading for much of the race and finished in 17:27.1. Male (KY) High's Kaitlyn Lacy, who had run at Foot Locker in two seasons prior, qualified in her first appearance at NXR Southeast in 17:30.1.

In the boys race, Brentwood's Brodey Hasty played it "honest" but let loose at the first hill and never looked back, locking up his third straight NXR Southeast win in 14:36.2, a meet record.

Milton's Sam Bowers and Nicholas Yanek went back-to-back in fifth and sixth and locked up individuals berths, while two candidates from Maryland and Virginia also grabbed their first tickets.