When all six boys on the Brentwood (TN) Cross Country Club toe the line at NXR Southeast on Saturday in Cary, North Carolina, it will mark as validation for all the hours of hard work and miles each member of the team put forth after walking away from the high school program in the fall.

And yet, while qualifying for NXN for the second straight season won't be easy, the bigger picture goes far beyond simply a win or a loss at regionals.

"I don't think it really matters if we qualify," said Brentwood senior Brodey Hasty, ranked No. 1 on the Flo50 national rankings. "If we all race to our potential and work really hard, if we go out there and race our best races and don't qualify, I think we'll be satisfied."

With only two automatic qualifiers up for grabs, Brentwood's club team will have to put together a great team race, despite the challenge of having only run two cross country races this fall. The season's been almost entirely training.

The squad, which has no room for error, is competing in one of the toughest regions in the country, with a host of highly ranked teams, including Flo50 No. 2 Loudoun Valley (VA).

But those Brentwood seniors are pretty good. One is Hasty, a two-time national champ in the two-mile who became the third-fastest junior in high school history to run a mile last season in 4:01.75. The other is Scott Thompson, who posted a one-mile best of 4:08.22 and 3200m PB of 8:57.18 this past spring.

Brentwood probably isn't surprising anyone anymore at NXR Southeast. But they're racing with purpose. The club is vying to become the first team in NXN history to race in a regional without having competed over the high school season.

"There's a lot of weight to it," said Quinn Heithcock, a junior on the team who raced at NXN last year. "The importance of what we're doing, it puts a little more pressure (on us), but it's almost like an honor."

Here are some of the facts. No member of the team was ever suspended by Brentwood, or ineligible during the cross country season. So their unattached status remains legit in the eyes of NXN.

But just to be sure, the squad sought and was provided with a written waiver by the school several weeks ago which outlined that every member of the team was eligible. That was proof enough for NXN.

The team only raced at two meets this fall, including open/college races at the Adidas XC Challenge in North Carolina and at the Furman Gene Mullin Invitational in South Carolina. Just recently, all six of the runners posted superb times on the track in a 3200m for the Hoka One One Postal Nationals, averaging 9:29 for the 5 x 3200m national contest.

"A team is not defined by whether or not they're affiliated with something else," said Guy Avery, who coaches the club team. "A team is defined by the people on it and a common goal between them." 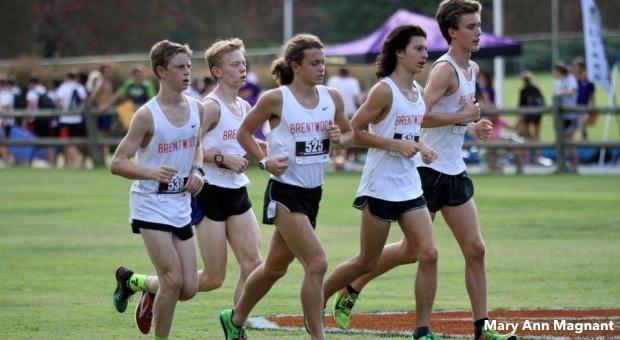 So why are they running unattached?

After feeling wronged by their high school this past spring, summer and fall, they said, the members of the club team made a decision to run on their own.

The athletic director was dismissed and the new school coaches excluded the returning varsity club boys from the school team's communication all summer, so the six boys decided to run unattached.

That move weighed on many of the athletes, who weren't able to run for a state championship -- a meet the team likely would have won for the sixth time in seven years.

"Personally, it stinks we couldn't run for our school at state," Sandifer said. "State is a great experience for everyone. And it stinks, but we moved with the hand we were dealt, and went with it."

But Hasty and Thompson were veterans the team could lean on in hard times.

"It was scary at first," Heithcock said. "Stepping into the unknown like that and leaving the school (team) behind and having to leave everything that we were used to and comfortable with -- it was hard. It was frustrating at times, but I'm glad we did it."

Through that time, the team said, they grew closer. They trained at a local park about 15 minutes away from the high school, doing countless tempo runs, time trials and other workouts. And they prepared for future meets some days by going through their routine, circling 90 minutes before competition like any race day.

"That's a fundamental thing," Avery said. "And we're good at the fundamentals."

Still, some parts of the season were hard. Instrumental factors in cross country were hard to figure out. The team could never score in a meet, so the experience of strategizing for optimal displacement never took place. They ran in college open races, never against high school competition.

"It was hard to put an apples-to-apples comparison (together) for how we'd stack up with other high school teams," Hasty said.

But the season never felt like it was lost, either. Thompson always felt like the team was united.

"To me, it just feels like we're any other team," he said. "We just want to qualify."

From the beginning, Hasty, who has a chance to win NXR Southeast this Saturday and potentially contend for an NXN individual championship, had always hoped of this being the final outcome. He wanted to race with this team.

"To still be able to compete at that level as a group of guys, it's such a great emotional experience," Hasty said. "We all walked away together as this hard thing we had to do. And now we're in a position to still race together and again, we would all love to qualify. If we would be able to do it, having gone through this, that would be amazing."

Success for Brentwood's Club will be evaluated in a lot of ways. But don't get it wrong, either.

The team wants to qualify for NXN.

"We would love to qualify," Hasty said. "I think just giving our best, because mostly this year has been so tough, it will be challenging either way."

Once Brentwood steps to the line on Saturday, they'll finally figure out what kind of team they are this season.