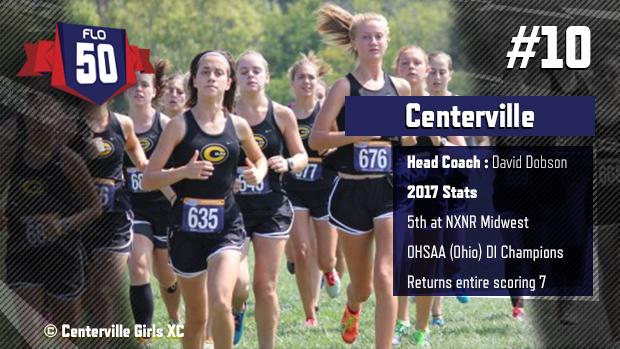 Centerville (Ohio) High has a chance to be very good in 2017 -- and not just within the state of Ohio but nationally as well. A year ago, the Elks finished fifth at the NXN Midwest Region, just missing out on a berth to NXN, but the program holds high hopes to return to the national meet for the second time in school history. A year ago, Centerville won the Ohio High School Athletic Association DI Championship and returns its top seven from the 2016 season. High expectations follow one of Ohio's best. Last week, the team produced its first win of the season at the Ohio Early Season Invitational, scoring 52 points behind five runners inside the top 20 and seven inside the top 32.
Probable Top Seven:
___
Centerville (Ohio) High head coach David Dobson answered a few questions about his upcoming season. See his answers below.

How long have you coached at your school?

I've coached at Centerville for 18 years.

What is your meet schedule this fall?

This gives you a little look at how we are approaching each meet too.

How has your summer training gone for your team? What do you focus on during the summer months?

The athletes have had a very solid summer of training.  We build intelligently up to our max mileage for the season and hit that several weeks throughout the weeks of July, August and September. We focus on three main workouts: 1. Fartleks; 2. Hills; and 3. Tempo Runs.

Which athletes do you see as the probable top five this season?

I believe we have a very strong, young group of athletes that will be difficult to distinguish between them throughout the season because their potential is all very close together.  However, I would imagine we will be led by senior Kelli Walsh or junior Grace Kilroy at the majority of our meets. After that, we feel like we have some interchangeable parts. We have a couple new faces to add to the returners from last year as well and some additional returners that have really made some nice developments.

This year we have six captains for our team of 71 athletes.  They are chosen through a captain application process in late spring. This year it happened that three of them are returning varsity award winners and three are returning junior varsity runners. They have been a part of a leadership cohort during the past year where they learned a lot a great deal about team dynamics and leadership.

Who are some new faces who will make an impact on your team this year? (i.e. freshmen, transfers, runners who have improved a lot)

Emma Bucher is a freshman who has great potential. She is a very hard, but smart worker. She was a 5:08 miler this past spring. In addition, Sydney Khosla is a sophomore who was banged up most of the season last year until the end. She ran 19:16 in just her second race last year and has already matched that so far in 2017.

Our team culture from the first runner to the seventy-first runner is always the same: We are one big FAMILY!

Putting the team's betterment before our own.

How would you describe your team's culture?

It's the driving force of our team that is passed down from one team to the next, year in and year out.

What are your top three goals for the team this fall?

1.  Develop the right way: With unity, passion, and courage within the team and its members

3.  Capture our fourth Ohio state championship and qualify for NXN for the second time.