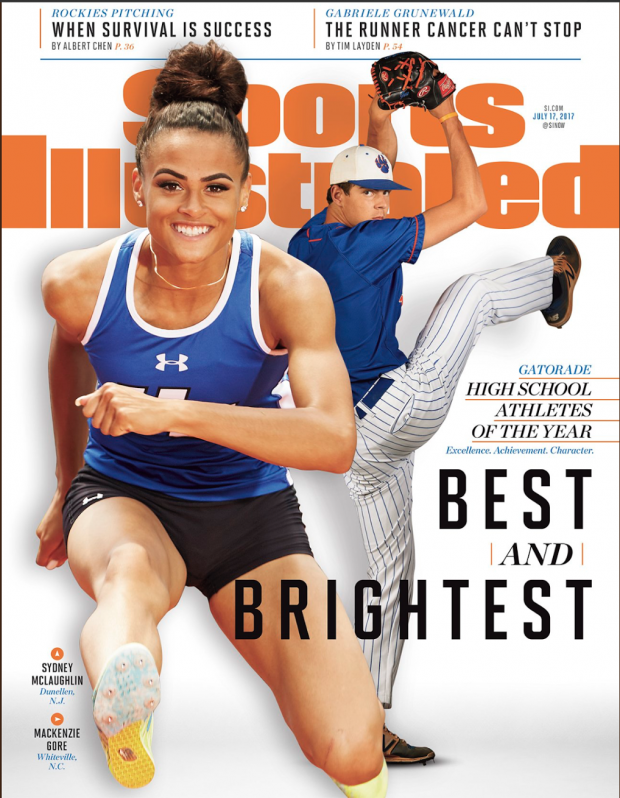 Recent Olympian and Union Catholic (NJ) High graduate Sydney McLaughlin finished her distinguishable high school career as one of the nation's best track and field athletes, and perhaps one of the best all-time.

McLaughlin, who will continue her career at the University of Kentucky -- where she will shift course as a freshman and compete in the 100m hurdles and long jump -- became the first repeat winner of the Gatorade National Player of the Year in the company's 15-year history of the award.

She was awarded next week's Sports Illustrated cover -- headlined: Best and Brightest -- after a career in which she was argued to be one of the most dominant high school athletes of all-time.

From the SI story:

And so the discussion around Sydney McLaughlin is often less about her standing as the nation's top female high school athlete this year than where she ranks among all high school athletes ever. In April, USA Today entertained the question of whether McLaughlin is the most dominant high school athlete since LeBron James. (Felix and swimmers Katie Ledecky and Missy Franklin were other top candidates.) Her success and social media savvy have birthed a young, exuberant following whose cheers often dwarf those for other Olympians at the same meet. "I've never seen an athlete with more obvious potential," says one prominent track and field agent, who requested anonymity to discuss a potential client. "She just has a poise about her in these big meets that kind of exceeds her age," says Lawrence Johnson, who coaches several Olympic medalists. "The moments aren't too big for her. She's shown as the stakes get higher, she's able to meet the challenge."