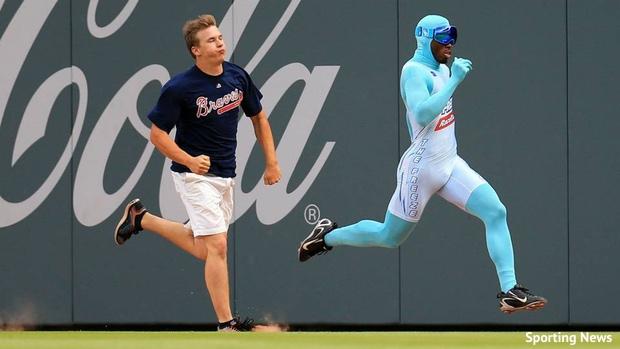 The Freeze may have lost his first race as the mascot for a mid-inning promotion during Atlanta Braves games, but it was a win over a prematurely celebrating fan this past Friday that spread a cold front over the internet.

He tried to "Beat the Freeze". He did not succeed. pic.twitter.com/w7dKrNht8b

Underneath the flashy costume is Nigel Talton, an aspiring track star with a message for other sub-elite sprinters. A graduate of Peach County High in Georgia and a former collegiate sprinter for Iowa Wesleyan and Shorter University, the 26-year-old Talton has been on the Braves' grounds crew since 2012.

He was an obvious candidate for The Freeze once he demonstrated he could round the bases in under 15 seconds --- he was originally selected to participate in a Braves' promotion title "stolen base challenge" before impressing the club enough to earn a new gig -- and he has the track times to back it up.
Talton holds impressive lifetime PRs of 6.73 in the 60m, 10.47 in the 100m, and 21.66 in the 200m. He had a successful career in the NAIA at Shorter University that included a third-place individual finish in the 100m in 2012, and he continued that success post-collegiately to make the final of the 2013 U.S. Indoor Championships in the 60m.
Talton came out of college as an accomplished athlete, but in the professional world of track and field, his times were not good enough to secure a sponsorship. Having made a USA Indoor Championships final, he's aiming to qualify for 2018 World Indoors.
"Don't give up on your dreams... I just want to make a team before I'm done," Talton said. "My route to that path was detoured, and this came upon me, so right now I'm just continuing to train... just training and saving up for next year."
One of the detours that Talton is referring to is the fact that he had to leave his longtime coach Derrick Atkins -- the 2007 World Championship silver medalist in the 100m for the Bahamas and Asafa Powell's cousin -- to accommodate his busy work schedule.
Talton works two jobs and is seeking a sponsor to give him an opportunity to train for the 2018 USA Indoor Championships, with a goal of making 2018 Indoor Worlds team in the 60m. Talton described his training as heavily endurance-based, choosing to focus more on 300m, 400m and even 600m interval repeats to improve his strength when he finds a rare moment to train.
Like many athletes at his level before him, Talton laments the lack of post-collegiate support. The Freeze is essentially a side gig that subsidizes his dream.

"I just want to have the opportunity to train as a professional track runner," he said. "I wish there was a program for us athletes. It's so hard for us athletes that don't have sponsors that have potential. It's very hard, that's why I work two jobs. I'm going to continue to keep my faith and continue working for the indoor season... It's not about me, I'm just doing it to inspire others and to entertain."

Certainly, Talton has provided one of the most entertaining sprint moments of 2017.

The Freeze In College Jun 14, 2017
Tweets by milesplit