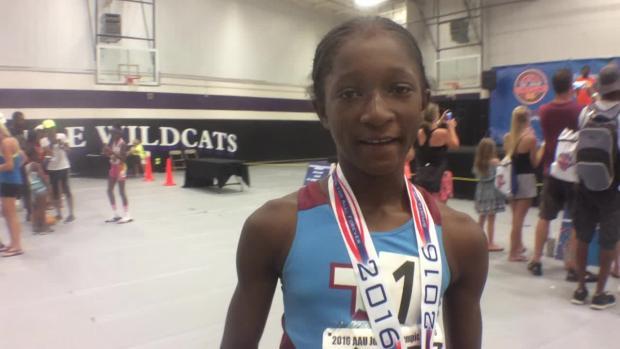 The AAU Outdoor Track & Field season is heating up! Eighteen different district events and one regional are set to take place this weekend. Three of the districts will be streamed live on FloTrack and will feature some of the brightest stars from last year's AAU Junior Olympics.  You can catch these triple-event winners on FloTrack as they begin their journey to Ypsilanti, Michigan, the host city for this year's AAU Junior Olympic Games!

Alleen proved to be one of the best young mid-distance runners of all time last year as she won titles in the 400m, 800m and 1500m for the 8 and under age group at last year's AAU Junior Olympic Games.  Her times of 2:32.00 and 5:18.44 were both age group records. Now competing in the nine-year-old age group, Allen is scheduled to run the same three events at the Mid-Atlantic District Qualifier. You can watch her compete in the 1500m and 400m on Saturday and the 800m on Sunday.

Kanai showed serious range last year sweeping the 200m, 400m, and 800m in the 10-year-old age group.  She was one of just nine athletes to win three events at Junior Olympic Games. Along the way, she became the first 10-year-old to dip under 60 seconds in AAU competition setting a new world record in 59.51. She is set to compete in the Mid-Atlantic District Qualifier in the 400m Dash on Saturday and 200m Dash on Sunday.

Simms, a Plano, TX native, not only won three national titles last year but took home national records in two of them.  Similar to Bey-English, he won the 200m, 400m, and 800m titles. His times of 59.25 and 2:19.43 were both records for 9-Year-Olds. The former record holder for the 800m? Brandon Miller, the now freshman class record holder in the event.  Now as a ten-year-old, Simms is set to defend his titles in all three events. His road begins on Saturday at the Southwestern District Qualifier.