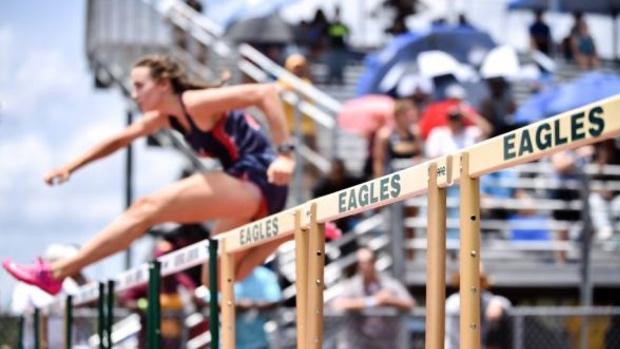 As most of our audience is well aware, high school track and field does not get the respect it deserves from traditional media. This is an undisputed fact.

Local sports media often prioritizes the glitz and glamour of our nation's most popular sports.

This was intensified recently when a local Pennsylvania columnist from Lancaster, Mike Gross, filed a rather regrettable editorial comparing track to frisbee golf. There was backlash by readers, and it was emphatic.

"Football, to which This Space (sic) devotes most of its year, is the most intense, high-pressure American sport.

"Track and field, to which we devote three pleasant weekends each spring, is every bit as intense and high-pressure as frisbee golf.

Read the original column here. And then read his apology.

For some (mostly male) sports reporters working in print journalism today, they have priorities and most of those priorities revolve around football. It's what people crave in the fall and it's what local to regional to national media outlets obsess over nonstop.

If you work in a state like Texas or Florida or Ohio or Pennsylvania or California?

It's 24-7 football coverage by local beat reporters -- though the ironic part is those states are home to some of the best performances every year in track.

In today's LNP, I wrote what was intended as an affectionate appreciation of HS track & field. Obviously, I missed the mark by a lot (cont)

To some, although not all, covering track and field is viewed simply as an assignment. I was a print media sports reporter for 10 years before I was hired at MileSplit to focus exclusively on cross country and track and field.

I know departments focus much of their coverage budget on football. I've seen those reporters. I've heard the jokes. Here's another one of them from the column:

"Sometimes the sprinter misses out to go to, or get ready for, the prom.

"Track, like all spring sports, fights for attention with class trips, school plays, family vacations, cheerleading competitions, award banquets, commencement rehearsals and on and on and on.

"It's not unusual for athletes, with the consent of their coaches, to miss the first couple weeks of track season to get a winter sport out of their system. There is a constant trade-off between individual and team goals.

"But nobody gets too bent out of shape about it."

Stories like this do nothing for the men and women who really push this sport in the right direction.

Talk to Don Rich, who founded PennTrackXC and is the Director for our State Sites, for one day and you'll learn more about the sport than you ever knew possible. Mike, he's right around the corner, go give him a call.

Here at FloSports, we have young, hungry reporters who care about this sport and want to give it justice anywhere and everywhere.

And we're here to dispute the idea that track isn't important.

"The L-L had a strong group of male throwers last year, but at states they ran into a Western Pa. kid, Jordan Geist, who was one of the best high-school shot putters ever.

"They had no chance to compete with him, but nothing about that was discouraging.

"I think it's cool to see that,'' said McCaskey thrower Cain Resch. "I can't compete with it, but it's awesome to see."

Mike Gross, I have some thoughts for you.

Do it before the last week in May.

Go talk to the sprinter who's out in the sweltering heat working on his starting blocks for two hours.

Try to do this in February, when the sport is first beginning.

Talk to the thrower who commutes an hour to see a private coach so he or she can learn the proper technique on how to glide or spin.

Do this on a day when you would normally write a spring column on Penn State football.

Talk to the coach who's been educating himself or herself for years to gain the proper credentials to teach young athletes how to properly triple jump.

Do this in the summer. That's when most of this is happening.

And when you've done all that, find the one athlete who was devastated they missed the state meet and cried so much that they made it their mission to change their destiny the next season.

Talk to the kid who spent an entire summer training inside a converted warehouse, focusing on every little detail of their training, just so that they could finish fifth in the state.

"Consider, at big-meet track's essence, the medal stand. The top eight - eight! - finishers in each event at meets like Saturday's Lancaster-Lebanon League get medals.

"This is surely seen as evidence of a softening and weakening of our culture by those determined to see such things, except that it was that way when they were kids, too."

In the hours after Gross saw backlash on his column -- perhaps the most he's ever received -- he issued a sincere apology.

He said he did not mean to belittle track athletes and he apologized for his comparison of frisbee golf to track.

But to be fair, it shouldn't have been written in the first place. And it wouldn't have if Gross understood the true value of high school track and field.