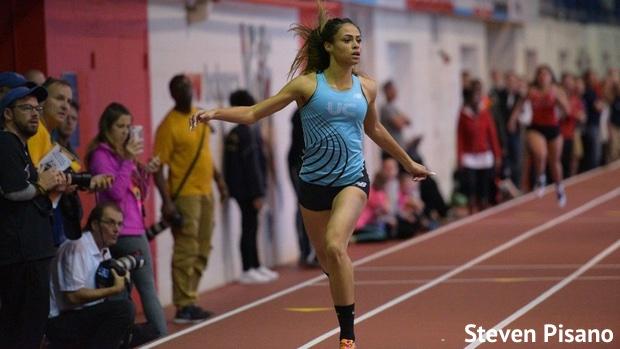 In an attempt to crush the indoor world record, 17-year-old Sydney McLaughlin has been added to the USA All-Star Distance Medley Relay team at the New Balance Indoor Grand Prix. The 400m hurdles Olympian is scheduled to run the 400m leg this Saturday in Boston as part of the team that includes Olympic bronze medalist Jenny Simpson, fellow bronze medalist Emma Coburn and world championship medalist Brenda Martinez.

According to the IAAF website, the talented quartet "will have their sights set on the world record of 10:42.57." The record, which included Martinez on the anchor leg, was set at the same meet two years ago.
"It's pretty cool," McLaughlin said in a press release. "I'm just concerned about making sure I do my part and make sure they have enough space to do what they need to do, and just contributing the best I can and making sure I don't mess it up. To be part of something like this is crazy."

McLaughlin unleashed a third-place finish in the 400m hurdles at the U.S. Olympic Trials where she broke the world junior record and earned an Olympic berth. She made it to the semifinals of the Olympic Games in Rio where she competed as the youngest American track Olympian in over 40 years. After competing in Rio last summer, McLaughlin announced her college commitment to the University of Kentucky. She will be coached by Edrick Floreal who trains 100m hurdles world record-holder Keni Harrison.

Most recently, McLaughlin ran the second-fastest 300m sprint in prep history when she clocked 37.11 at the Molloy Stanner Games on Jan. 14. Her indoor 400m personal best of 51.84 will be a welcomed addition to the distance medley relay this weekend.

Fellow teen sensation Sammy Watson was also announced to the field on Monday. Watson will be competing in the 800m against world champion Marina Arzamasova. Last weekend, Watson broke the national high school record in the 600m with a 1:28.67 performance.