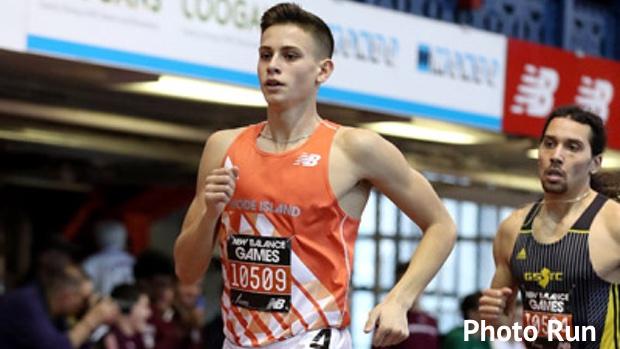 Competing at the New Balance Games in New York, D.J. Principe nearly became the tenth high schooler to break four minutes in the mile and the third to do so indoors. He ran 4:00.97, aggressively competing in a field of professionals. Drew Hunter won the race in 3:58.92, Julian Oakley was second in 3:59.04, and Principe was third.

Principe, who runs for La Salle Academy in Providence, Rhode Island, will run for Stanford next year.

Only Hunter and Alan Webb have ever run faster indoors in high school; today's race comes exactly three weeks after Principe ran 4:04. He ran a smart race today, coming through 409 meters in 60.9, 809 in 2:01.6, 1209 in 3:01.3, and closing in 59.6. In the chase pack behind Oakley, Principe, not Hunter, was the aggressor. With 600 meters to go, Principe tried to go around Hunter, spurring the move where Hunter eventually caught Oakley.

Principe will almost certainly be the tenth high schooler to break four minutes in the mile, which would make him the fifth high schooler in the last three years to do it. Only five preps broke 4:00 from 1965 to 2014.