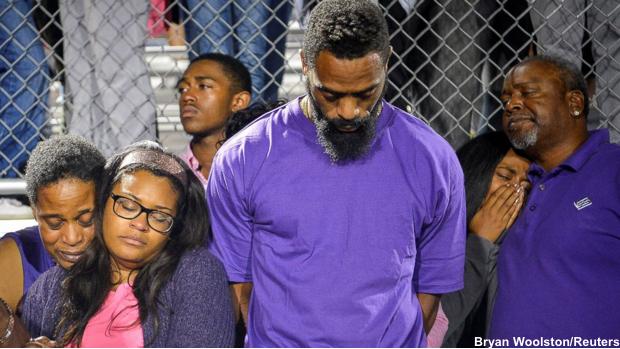 Olympic sprinter Tyson Gay made a plea for an end to gun violence as he addressed thousands of community members who gathered at a candlelight vigil in honor of his daughter, who was fatally shot early Sunday morning.

Trinity Gay, 15, a rising star sophomore on the Lafayette High School track team, suffered a fatal gunshot wound to the neck when she was caught in the crossfire of shots fired from two vehicles in a restaurant parking lot in Lexington, Kentucky.

Standing beside Trinity's mother, Shoshana Boyd, on the same track where he and his daughter starred, Gay thanked the nearly 2,000 students and community members for their outpouring of support and urged them to stop the "senseless" killings.

"I want you guys to love each other, have peace, and protect each other," Gay said, according to ABC Lexington affiliate WTVQ. "That's what Trinity would have wanted. ... Life is not a joke.

"I don't want to read in the paper next week about another senseless killing."

The vigil began with dozens of pink and purple -- Trinity's favorite colors -- balloons being released into the sky. Many people in the crowd, including Gay and Boyd, wore either pink or purple. Many of Trinity's friends, teammates, and competitors hung pairs of running shoes and track spikes from a fence along with a baton that said "In Memory of Trinity." 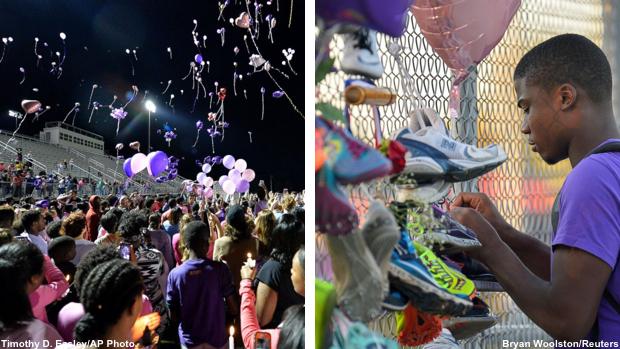 Gay, who said he was "numb" from crying over Trinity's death, hugged Boyd and several other supporters around him.

"As parents we do our best to raise our child the best we can," Gay said, according to the Lexington Herald-Leader. "And sometimes things just happen. It's out of our control. We only can look up and ask God why. Sometimes, we don't get that answer. I just want people to be safe and understand that we all have a life. We all have dreams, and when your fellow peer has a dream, it's our job as brothers and sisters to come together and protect each other."

According to the Associated Press, three men charged in connection with the shooting pleaded not guilty Monday and face an Oct. 25 court date.

The three appeared via video before Fayette County, Kentucky, District Court Judge T. Bruce Bell, who set bail at $5,000 each for Chazerae Taylor, 38, and his son, D'Markeo Taylor, 19, on wanton endangerment charges. Dvonta Middlebrooks, 21, is charged with wanton endangerment and possession of a firearm by a convicted felon. His bail was set at $12,500.

Lexington police say Middlebrooks was in the parking lot of Cook Out restaurant early Sunday and fired multiple shots in the incident in which Trinity was shot. Court records said the Taylors acknowledged firing shots.

Gay told The Associated Press that in talking with police, he believed his daughter was an innocent bystander. But he said authorities didn't reveal details of their investigation.

"We are thankful and grateful for all of love, prayers, condolences, and food that has been sent," the Gay family said in a statement issued Monday afternoon before the vigil. "We are a close family. We have a strong relationship with God. We are deeply saddened for how this has affected not only our family but the lives of others that has lost a child a friend, or relative by these senseless act of violence. We also believe we in love and forgiveness. We are also praying for the families of the shooters because this too is a loss."

During the vigil, the Lexington Herald-Leader spoke with Morgan Gaines, 16, and Alexa Garner, 17, who were with Trinity at Cook Out on Sunday. Both students said the gunfire erupted seemingly out of nowhere. They were each sitting in the front seat of Gaines' car. Trinity was standing outside the vehicle.

"We were all just listening to music, talking, when we heard gunshots," Gaines told the Herald-Leader. "My first instinct was to roll up the windows, lock the doors, duck down. It didn't sound like bullets were passing my car. Somehow, the doors got unlocked and Trinity hops in behind me and she's screaming, 'I've been shot, I've been shot. Take me to the hospital.'"

While Gaines drove, Garner said she hopped in the back seat and tried to keep Trinity conscious.

"I couldn't find the (bullet) hole," Garner said. "I was trying to find where the bleeding was coming from. She started seizing and passed out. She woke back up and she was like, 'I'm going to stay up. Just get me to the hospital.' You wouldn't even think she got shot. There was no tears."

Watch Trinity's 100m race from the Class AAA Championships below. Her race starts at the 1:46 mark. She is running in Lane 4.