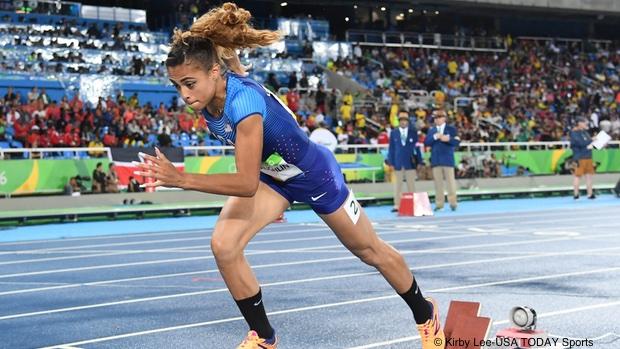 Life is back to normal for Sydney McLaughlin, if that's possible for a 17-year-old who made sports history this summer by becoming Team USA's youngest track and field Olympian since 1972.

McLaughlin, who will begin her senior year at Union Catholic High School in New Jersey this fall, was 17 years old when she advanced to the 400m hurdles semifinal round in Rio. At July's U.S. Olympic Trials, she was 16 when she placed third in a new national high school record and world junior (U-20) record of 54.15. She turned 17 a week before the Games.

In an exclusive Skype interview, we chatted about the Olympics, people posing as her on social media (weird), the truth about the McDonald's in the athlete village, and whether or not she'll turn pro. Watch the three-part interview in its entirety, or skip to a specific part by reading the notations below.

[0:22] - Sydney on what the future holds, turning pro, college choices
[1:10] - impressions of the Olympic experience, racing in the stadium, getting sick
[3:31] - on skipping the Olympic Games opening ceremonies to celebrate her birthday
[4:44] - on daily routine at the Olympics
[5:56] - on rooming with Vashti Cunningham, the only other teen on Team USA's track and field team
[6:59] - on expectations for the Olympics
[7:47] - on learning from older athletes

[0:03] - on not getting starstruck, meeting Justin Gatlin, sharing a suite with Natasha Hastings
[0:49] - on watching different Olympic sports and her favorite sport to watch
[1:35] - on meeting fellow New Jersey teen Olympian Laurie Hernandez from the U.S. gymnastics team
[2:37] - would she make a good gymnast? Also reveals her secret talents!
[4:07] - on trying new track events in her senior year, cross country, if she might switch to the open 400m

[0:01] - on her new fame, on social media, why she decided to bring back her Twitter
[1:12] - on how her parents help her stay grounded, ignore the hype
[2:01] - on food in Brazil, McDonald's in the Olympic Village
[2:56] - on long walks in the Olympic Village, feeling out of her element, Brazilian cereal
[4:05] - the most surprising thing about Brazil
[5:11] - on sight seeing in Rio
[6:13] - on her relationship with brother, Taylor (an All-American hurdler at the University of Michigan) and being jealous of Taylor drinking a coke at end of his season
[7:37] - takeaways from Rio, thoughts on Tokyo 2020

Here are some memorable Instagram moments with Sydney and her fellow Olympians:

How team USA gets down before closing ceremonies  #nomusic

Union Catholic track and field alumnus Kevin Mulligan traveled to Rio and made the following video of Sydney's journey: