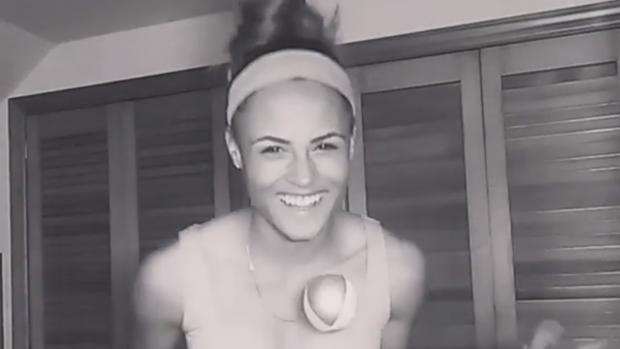 Sydney McLaughlin may have become a household name this summer for her hurdling ability, but the 2016 Olympian has a secret talent: juggling. Last night, she challenged fellow Team USA track star Trayvon Bromell, who ran the 100m and 4x100m relay in Rio, to a contest on Instagram.

"I can juggle better" ... Okay then let's see it @iamtrayvonbromell

McLaughlin's secret skill was revealed on social media earlier this summer, thanks to a USATF tweet.

PS - we've been keeping a secret…

Not only is #SydDaKid talented at 400m hurdles, she's also a crazy good juggler! pic.twitter.com/SDYQgZZc2Q

McLaughlin, who at 17 is the youngest American track and field Olympian since 1972, advanced to the semifinals of the 400m hurdles in Rio. She placed fifth in 56.22. The rising senior at Union Catholic High School in New Jersey set the national high school record in the event when she ran 54.15 at the U.S. Olympic Trials.

Bromell, a New Balance professional by way of Baylor, advanced to the 100m finals and placed eighth overall in 10.06. He also contributed a leg on the United States' 4x100m relay, which unfortunately was disqualified in the final.

How will these two track stars measure up in juggling? So far, Bromell has yet to respond with a post of his own, but that doesn't mean he won't! We will continue to keep you posted.

Stay tuned for an exclusive post-Rio interview with Sydney coming soon to MileSplit!