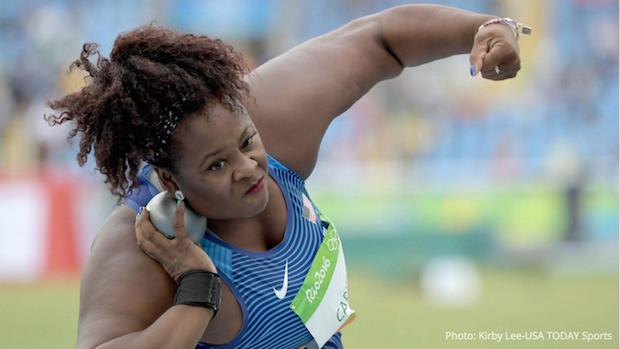 Michelle Carter won her first career Olympic gold medal in the shot put with a toss of 20.63m, shattering the American record at the Olympic Games in Rio de Janeiro. Carter was in second behind two-time Olympic champion Valerie Adams of New Zealand for much of the competition but claimed gold on her sixth and final throw.
She is the first American woman to win Olympic gold in the shot put and the second American to medal in the event.

Carter's performance caps off a breakthrough year which included the 2015 world bronze medal, the 2016 world indoor gold medal, and finally her first Olympic gold. She was fifth at the 2012 Olympic Games.

Her final throw in Rio shattered her own American record mark of 20.24m set at the 2013 USATF Outdoor Championships.

Fellow American and 'Ole Miss NCAA champion Raven Saunders finished fifth overall in her first ever Olympic Games with a personal best of 19.35.

#GOLD for #MichelleCarter You have made your country, state, family & your church proud!! - Pastor Tony  pic.twitter.com/FE26JsqbBy

By Taylor Dutch for FloTrack

Defending Olympic champion Shelly-Ann Fraser-Pryce showed no signs of injury when she won her heat of the women's 100m Friday night at the Olympic Games in Rio de Janeiro.

Her 10.96 winning performance is her second-fastest time of the season after finishing second in 10.93 at the Jamaican Trials in July.

The two-time Olympic champion suffered from a lingering injury in her left toe before the Prefontaine Classic in May, which delayed her start to the 2016 season. However, she looked back to her winning form Friday night in Rio.

World bronze medalist Tori Bowie eased her way into the semifinal with an 11.13 winning time to take down Nigeria's Blessing Okagbare. Bowie is returning from finishing third in the 100m and winning the 200m at the Olympic Trials.

She also established a then-world lead of 10.80 at the Doha Diamond League meeting in May.

Two-time long jump world champion Tianna Bartoletta won heat five of the 100m in 11.23 ahead of Ewa Swoboda to automatically advance to Saturday's semifinal round.

World 100m silver medalist Dafne Schippers jogged her way to victory out of heat two with a winning time of 11.16. The Dutch sprinter has already notched a season's best of 10.83 at the Doha Diamond League meeting

Great Britain's Desiree Henry came incredibly close to her personal best when she blasted an 11.08 winning time to claim the first heat of the women's 100m. The 20-year-old ran 11.06 in Azusa, Calif. this year for her latest personal best. Henry was part of the British 4x100m relay team that finished fourth at the 2015 world championships.

Olympic Trials champion English Gardner closed out the heats with the final victory of the night in 11.09. Gardner coasted to win her section against Carina Horn of South Africa.

By Taylor Dutch for FloTrack

Despite being assigned lane eight, world leader and 2008 Olympic Champion LaShawn Merritt showed his dominance over the field Friday in Rio de Janeiro.
Merritt blasted a 45.28 to win section five of the 400m in the first round of the Olympic Games. The Team USA veteran established the lead from the gun and maintained through the line, beating the rest of the field by 0.48 seconds.

Merritt set the world lead at the Olympic Trials with a winning time of 43.97. He also qualified to represent the United States in the 200m after finishing second to Justin Gatlin in Eugene.

4x400m world indoor champion Gil Roberts also safely made it through to the semifinal after finishing second in his heat to Trinidad & Tobago's Machel Cedenio who closed in 44.98. Roberts followed in 45.27 to automatically advance.

Last year, Roberts didn't even make it past the first round of the USATF Outdoor Championships after finishing fourth in his heat. 2016 has been a different story, however, as he finished second in the 400m final at the Olympic Trials to qualify for his first Olympic Games.

2015 World Champion Wayde Van Niekerk easily advanced out of heat three with a winning time of 45.26. The South African sprint prodigy is returning from a year where he unleashed a shocking performance in the Beijing 400m final. Van Niekerk ran a blazing fast 43.48, the fourth-fastest mark in history, to win his first championship against Merritt and defending Olympic Champion Kirani James. He ran so fast and exhausted himself to such an extent that he had to be taken to the hospital quickly afterwards.

London Champion James also took care of business by jogging to victory in his section. The Grenadian sprinter won in 44.93.

Team USA's David Verburg advanced on time to secure his place in the 400m semifinal with a fourth-place finish in heat six in 45.48.

By Meg Bellino for FloTrack

Brenda Martinez, Jenny Simpson and Shannon Rowbury advanced from their respective preliminary rounds to advance to the women's 1500m semifinals at the 2016 Rio Olympic Games.
Martinez kicked things off for Team USA by finishing in a comfortable third behind World record-holder Genzebe Dibaba and Ireland's Ciara Megeean. Top six auto-advance from each heat, with the next six time qualifiers also moving on. Simpson was fourth in a much-faster second section led by 1500m World Indoor Champion Sifan Hissan and 2016 world leader Faith Kipyegon. Rowbury's third and final section proved to be the fastest, as the American record-holder finished second behind Ethiopia's Dawit Seyaum. See the full list of qualifiers and finish times below: