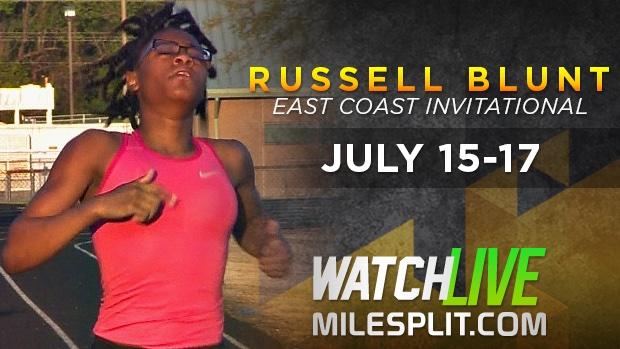 MileSplit will LIVE-STREAM all three days of the Russell Blunt East Coast Invitational this weekend, July 15 to 17, at Memorial Stadium in Durham, North Carolina. The event is historically one of the top age-group summer track meets on the East Coast. This year's meet will not only draw top summer track stars from North Carolina and Virginia, but also the island of Bermuda as the Bermuda Pacers Track Club is set to compete!

Read on to find out more about the weekend's most exciting events. All times listed indicate the beginning of the event; the meet is held on a rolling schedule, and each event features girls followed by boys and younger age groups followed by older age groups.

Who: Jordan Sales
When: Semifinals on Friday, 1:00 p.m. ET; Finals on Sunday, 3:30 p.m. ET
Why: Rising freshman Jordan Sales is a star in the making. She's not even in high school yet, and she already has a PR of 24.05, which she ran into a -0.8 meters-per-second headwind. Sales set a USATF national record when she won the national title in 24.92 at the USATF National Youth Indoor Track and Field Championships.

Who: Jordan Sales
When: Semifinals on Saturday, 12:00 p.m. ET; Final on Sunday, 1:20 p.m. ET
Why: Sales will return for the 100m semifinals on Saturday. She recently set her 11.91 PR en route to winning the North Carolina USATF Junior Olympics Championships. Even more impressive than her sub-12 effort was the fact it was run into a headwind of -1.5 meters per second. She's also the USATF national record-holder for the 55m dash with a 7.27, thanks to her title-winning effort at the USATF National Youth Indoor Track and Field Championships.

Who: Chantz Sawyers, Jalen Jones, Jazire Meadows, Tarik Samuel
When: Semifinals on Saturday, 2:00 p.m. ET; Final on Sunday, 2:00 p.m. ET
Why: Watch out--this race will be a quick one. All four athletes are seeded under 49 seconds, but Sawyers headlines the group. The two-time New Balance Nationals All-American owns a PR of 46.87. The rising senior at North Carolina's High Point Christian Academy is the No. 3-ranked 400m recruit in the class of 2017.

Watch Sawyers demolish the field to win his first 400m state title in 2015:

Who: Tamara Clark, Cambrea Sturgis , Amira Aduma
When: Semifinals on Saturday, 12:00 p.m. ET; Final on Sunday, 1:20 p.m. ET
Why: Sturgis and Aduma have both run between 11.70 and 11.73 in their careers, though Clark has run a nationally elite 11.52 (+1.0). Clark, the reigning North Carolina Class 4A state champion and a New Balance All-American, has the most high-profile experience of the group and should be the favorite.

Who: Tatiana Mills, Jazzmone Boyd, Devonya Brown
When: Final on Sunday, 9:00 a.m. ET
Why: Higher Power AC teammates Tatiana Mills and Jazzmone Boyd will face off in what could be a quick race. Mills ran 2:13 this year, and Boyd lowered her PB to 2:15.19. Devonya Brown of Western Branch also ran under 2:20. She hails from the powerhouse 800m program that placed second at nationals this year in the 4x800m relay, though she did not contribute to it.

Who: Imagine Patterson, Amira Aduma
When: Final on Friday, 12:20 p.m. ET
Why: Two of the nation's fastest-rising hurdlers will duke it out here. Imagine Patterson, a two-time South Carolina state champion and 2015 USATF Junior Olympics runner-up, holds the South Carolina state record for the 400m hurdles at 1:00.46, and she still has two more years of high school to finish! Aduma finished runner-up at the Virginia state championship and set her PR of 1:00.12 en route to winning the AAU Junior Olympic Games last summer.

Watch this video from SCRunners on Imagine Patterson's journey to AAU Junior Olympics: